Over the years, mares have developed a reputation for being difficult while they’re in season, but perhaps all we need to win them over is a little more understanding? Lucy Cursons investigates. 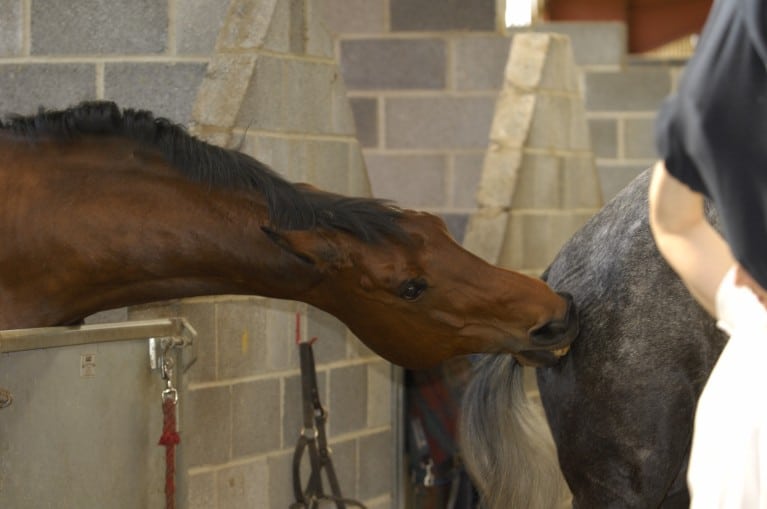 Hormonal mares can show various symptoms, very much depending on the extent of the problem, and they generally become difficult to handle and ride. Some signs include…

Although some mares can be tricky when they’re in season, it’s fair to say that riders who have experienced the best that mares can offer wouldn’t have anything else.

Hormonal mares are quite common, but being in season doesn’t cause a problem for all of them – much like women, some mares will barely notice their seasons passing, while others really suffer. And at the end of the day, it’s important to remember that like stallions, mares are entire, so they’re entitled to their moody moments!

It’s difficult to say what a mare feels when she’s in season, but it is possible that the rise in oestrogen levels during ovulation causes mood disturbances, much like they do in humans. And the fact that some mares show symptoms of low-grade colic and are tender when their ovaries are palpated at the time
of ovulation suggests a level of discomfort.

The behavioural changes may even be caused by something as simple as the mare’s natural drive to breed while she is in season, overriding her willingness to co-operate with things like being ridden.

Some people do seem to naturally ‘click’ with mares. They tend to respond best to sensitive, understanding handlers – remember the old saying, ‘You tell a gelding and ask a mare‘?

To get the best out of your mare, the key is to be adaptable and sympathetic in your stable management and training regimes – particularly while she is in season.

Mares are seasonally polyoestrous, which means that they only come into season during the spring, summer and autumn.

Pregnancy in horses lasts approximately 11 months, so the break in her cycle during winter ensures that the mare doesn’t give birth to a foal when the weather is at its worst. The mare’s cycles are controlled by hormones, which respond to the changes in the duration of daylight, so once the days get shorter leading into winter, the mare stops cycling.

The oestrous cycle occurs every three weeks and mares are in season for a period of four to six days. Here’s the sequence of events…

Often a transition oestrous occurs at the beginning of the season, although it can occur later in the summer, too. This is a longer period of oestrous where the mare remains in season for a week or two, while the ovaries are coming back into action after the winter or are preparing for the winter break.

During this transition oestrous, mares can be particularly hormonal, but once it has passed they usually settle down.

Write a diary of your mare’s behaviour so that you can see whether there’s a pattern. If she’s fine during the winter and you discover that her behaviour falls in a three-weekly pattern – and is particularly bad on day three to five of being in season – you can be fairly certain that her hormones are the cause.

Most mares are quite regular, so if your mare isn’t, it could indicate that there’s an underlying problem.

If your mare gets hormonal, there’s not much you can do to prevent it, but there are some things you could try to help ease the situation…

Remember to check the ingredients of your herbal supplement if you compete, as some herbs are banned in competition.

Out of the ordinary?

If your mare has any kind of behavioural problem, it’s a good idea to get her checked over to make sure everything is normal. Your vet will usually scan her ovaries and uterus to eliminate the possibility of things like a tumour or an infection.

can cause mares to stay in season for longer, so you may notice that her seasons aren’t regular or that her hormonal behaviour is lasting longer than the usual four to six days.

within the ovary can sometimes occur. These follicles don’t ovulate as normal – the ovaries tend to hang on to them for a little while and they can cause behavioural changes.

If the management options just aren’t working for you and your mare, there are some medical options you can try. Below is a brief outline of some of them – your vet will be able to advise you on the best treatment for your horse.

Regumate is synthetic progesterone. This drug works very much like putting your horse on the ‘pill’ and it should suppress any unwanted behaviour associated with being in season. It’s very effective and vets sometimes use it to test whether a mare’s problem is hormonal – if there isn’t much improvement in the horse, there may be something else going on.

The main downside is that it is expensive and there’s a small chance it can cause infection. This is because the drug prevents the mare from cycling, so she is not regularly clearing out her reproductive system. Great care must be taken that the drug does not come in contact with other horses or humans, too.

Ovuplant is a drug which is able to reduce ovulation in mares and by giving a double dose of Ovuplant, it’s possible to extend the period of time they are out of season for. It is also fairly expensive and has had mixed results, but it works very well in some mares.

A sterile glass marble can be inserted into the uterus to simulate pregnancy. This method works well in some mares, but not so well in others, and it does have its problems. Some marbles come out of their own accord and others can be difficult to get out. Plus, there is a slight risk of adhesions, which could cause an inflammatory response and cause the mare to have problems with breeding in the future.

A vaccination, which induces an immune response to inhibit the production of GnRH, has been successfully used in Australia for many years. It’s effective, but if you decide to breed from the mare, it can take a few years for her to start cycling again.
However, it’s not licensed in the UK. There is a product for pigs that’s been used in horses in some situations, but it should be discussed in-depth with your vet.