Colic can affect any horse at any time and it can be life-threatening. Vet Imogen Burrows, from Cliffe Equine Clinic, explains what signs to look for and what to do when it strikes 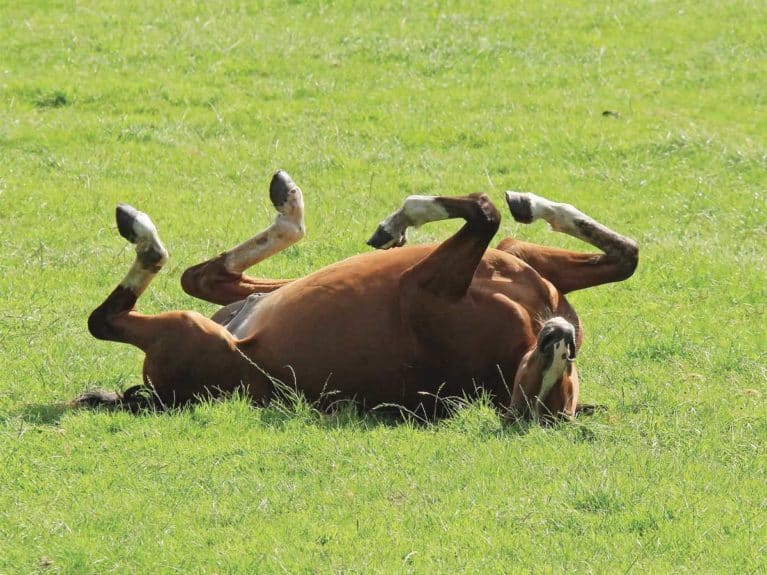 Colic is one of those things all horse owners dread and most horses will suffer from at some point in their lives. It’s certainly common for vets to be called out for this problem, with around 7% of horses coming down with it each year.

Many people think of colic as a condition in itself, but it’s actually just a term that describes abdominal pain or tummy ache and can have several causes. Horses have a limited number of ways they can express pain or discomfort and colic is a catch-all term for the behaviours generally associated with this type of pain.

Common signs associated with colic include…

The signs vary between individuals, depending on how stoic they are and the degree of bowel distention, inflammation of the intestinal wall and compromise to the intestinal blood supply.

Horses with an impaction usually appear dull, lose their appetite and won’t have passed droppings for several hours. Cases with a twisted bowel and an inflamed, bloated section of intestine that has a restricted blood supply are often in a huge amount of pain, responding very poorly to pain relief.

Did you know? Fortunately, the vast majority of colics are simple cases, resolving either without veterinary attention roughly 30% of the time or after one veterinary treatment. Around 10–15% of colics are repeat cases, with some horses having multiple episodes each year. Very broadly, colic can be separated into two categories – medical and surgical.

Medical cases are by far the most common, accounting for 90–95% of all colics. Spasmodic and simple ileus cases with no specific diagnosis account for 80–85% of all colics, and impactions occur around 10% of the time.

Surgical colic occurs when medical treatment fails and surgery is needed to resolve the problem. Non-strangulating obstructions or strangulating diseases requiring surgery account for the approximately 5% of cases remaining… Is my horse at risk?

If your horse has colic

It’s always sensible to take feed or hay away from your horse, although you can offer him water. Your vet will offer some advice on the phone while they’re travelling to you. Depending on the signs your horse is showing, they may advise you to take him into a paddock or arena and walk him steadily or, for safety’s sake, to put him in a stable and leave him
until they arrive.

When your vet arrives, it’s very useful for them to know…

Top tip – Owners often worry about when to call their vet for colic, but vets never mind receiving a call about a colicking patient and would much rather you rang to discuss the problem sooner rather than later, so get in touch as soon as you suspect colic.

Investigation into colic starts with a thorough clinical examination by your vet. Once they’ve assessed your horse’s level of pain, they’ll… Did you know? Sometimes colicking horses who are in a lot of pain need to be sedated so they can be examined and treated safely.

This appraisal will give your vet an idea of how severe the colic is and act as a guide to assess your horse’s response to treatment. Depending on the findings of the initial examination and how much pain your horse is in, your vet may also perform…

Treatment depends greatly on the type of colic diagnosed or suspected and, even then, every case is different so a treatment plan is created on a case by case basis. However, as a general rule…

The vast majority of colic cases are mild and respond to treatment very quickly and successfully. However, sometimes surgical intervention is necessary. Surgery is often successful, although the risk of colic occurring in the future is higher due to adhesions forming within the abdomen as a result of the operation.

Many horses have one bout of colic and never suffer again, however some are more prone to it. If your horse has three or more episodes of colic in a matter of months, it definitely warrants further investigation to find the cause.