Seen our brilliant dentistry special in the May ’12 issue? Read 3 case studies from preparing that special… 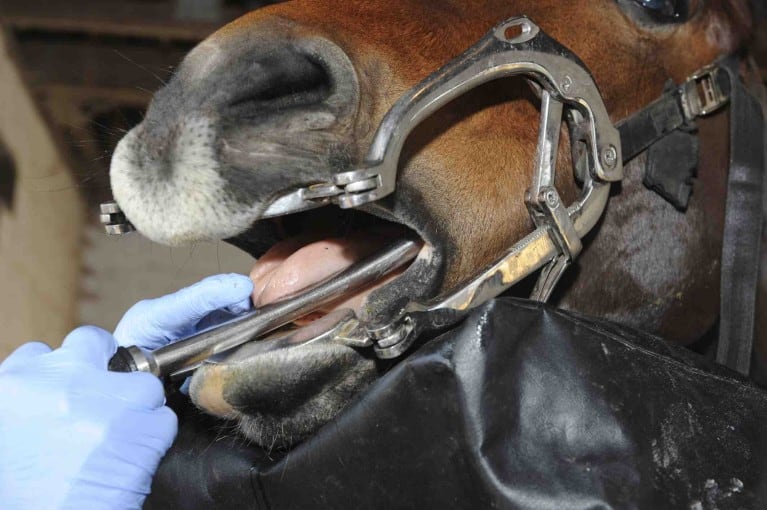 Millie is a Welsh Section D mare who is 18-years-old. This is just a routine check-up for her and her owner hasn’t noticed any problems. Chris says: “Millie appears to have some pulp disease. The tooth has fractured and that part of the tooth is dead. It’s difficult to tell how painful it is, but she is eating fine and chewing evenly on both sides, so that would suggest that it isn’t hurting her too much.

“She has an exposed pulp. Normally the pulp puts down a layer on the surface of the tooth to cover it and prevent pain. Then as the tooth wears down, that moves down with it. In this case, something has gone wrong and the layer hasn’t gone down, leaving an exposed pulp.

“This could cause a rotten tooth and sinusitis if it is left, because food could work its way up into the sinus and cause infection. To prevent that happening, I could fill the tooth. I can’t say for sure whether it will definitely cause her a problem in the future and whether she definitely needs something doing about it. It’s up to you whether you want to do it to safeguard against any future problems, so have a think about it and let me know if that’s something you decide to do.”

Tegan is almost three years old and this is her first dental check-up. Her owner tells Chris that she has noticed that she’s been quidding. He says: “Tegan has a retained cap that needs removing and two retained cap fragments where the cap hasn’t fully come away. I’m going to give her a little more sedation, as they need to be pulled out. I can see the permanent teeth underneath so I know that it’s safe to pull them off.

“The retained caps have pushed the permanent teeth into displacement, but now the caps have been removed, they will slot back into their proper place and shoudn’t cause her any further problems.”

Twenty-seven-year-old Bamber had a terrible tooth and sinus problem when Chris first saw him. He says: “When I was first presented with this little pony, I could smell it from about 30 feet away!

It had a nasal discharge that was just disgusting! The owner said he had had it for 10 years and that the vets had given up on it. They said it was totally untreatable and that he was just going to have to live with it.

Bamber looked like he had Cushing’s disease and inside his mouth were some horrible gaps in-between his teeth with masses of food stuck in them. In one place, the food was going up between the teeth into the sinus. I said that I didn’t think it was fair for him to carry on like that, and that I thought I could do something for him.

“Cushing’s disease always makes sinus and dental problems much worse, so I recommended getting that under control before surgery. Once the treatment for Cushing’s was under way, he came in for surgery.

We did it standing and we cut out a square flap from his skull, which is like a trap door to the sinus. We cleaned all the muck out and flushed it out for a few days. Then we looked at the teeth and used a novel bridging technique using bone cement to bridge the gaps between the teeth to stop food going up there. You’re never going to get the gaps to close, and if you pull the tooth out you end up with a bigger gap and you can have terrible problems with food going into the sinus. So we left in the slightly wobbly teeth and filled in the gaps.

“Unfortunately, after surgery the bone flap got infected. We sedated him, removed the bone flap and cleaned the wound up and it all healed up fine. He was doing brilliantly last time I saw him and the owners were delighted – he was like a different pony. They couldn’t believe he’d been suffering like that for 10 years.”