My Account
HomeExpert AdviceArticleEquine Rehab: How lungeing can help

Equine Rehab: How lungeing can help

Helping your horse move in the right way is an important part of a rehab programme, as Dr Katherine Nankervis explains 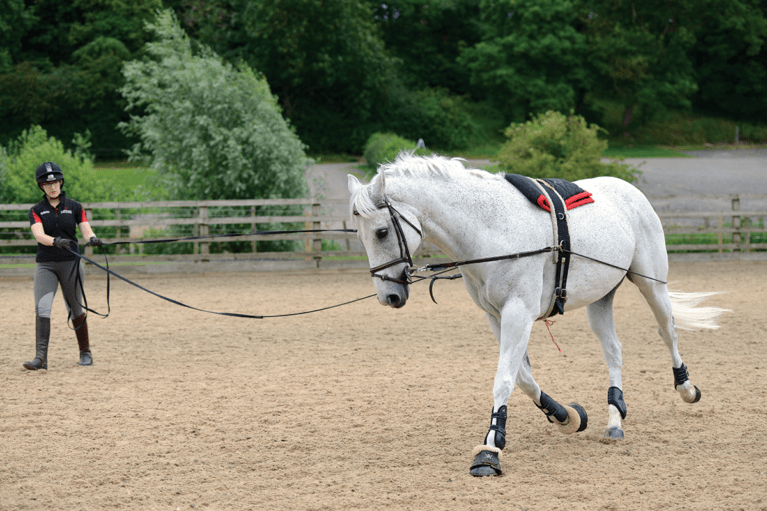 Helping your horse move in the right way is an important part of a rehab programme, as Dr Katherine Nankervis explains

Once your horse has benefited from veterinary treatment and physical therapy in whatever form was deemed most suitable for him, he’s ready to learn how to use his new body. The aim is to support the recovering injury, while prompting the development of more efficient muscle balance and movement, so it’s likely to incorporate a number of different methods of exercise, with the overall programme gradually increasing the difficulty and intensity. In addition to using high-speed and water treadmills (in part two), further therapeutic exercise, which can include lungeing, long-reining and in-hand walking, is a key part of a successful rehab programme.

When your horse is undertaking a rehab programme, you’re aiming to retrain his body to be able to access and harness the range of movement of key joints to the best of his ability. To do this, we need to find a method of exercise that encourages him to use a new and improved posture and pattern of movement, then reinforce this within short, but frequent, sessions. By keeping the sessions short and sweet, and by focusing on quality over quantity and duration, we make sure to avoid fatigue.

Checking out his moves

When thinking about altering a horse’s movement, it’s important to be careful that you’re not looking just at the aesthetics of his movement, but at the whole functional picture. To the human eye, something that looks regular and uniform is pleasing, but that doesn’t always mean it’s right. The change that needs to happen might not be what you, as an owner or rider, first expected to see – for example, even if your horse is working at Prelim level dressage, it might benefit him to work in a more shortened raised outline if we are specifically aiming to encourage flexion in his hindlimbs and behind his saddle. There’s no point trying to get your horse’s head down even further if he already has a downhill posture, because all that will do is push him onto his forehand.

Using a lungeing aid or piece of kit doesn’t produce or enhance your horse’s movement, it just limits undesirable in one way or another. So, if your horse hasn’t physically got the means to do what you’re asking, no amount of tack can do it for him. It’s also important to understand that using a lungeing aid won’t improve your horse’s injury, although if it’s used correctly, it can alter his movement in a positive way. For example, putting him in a Pessoa isn’t going to suddenly make your horse flex his back or go straight when he couldn’t before, but it could reduce his tendency to rush forwards when you’re showing him how he should be moving.

To discover more about the different lungeing aid and how to choose the right one for your horse, pick up your copy of March Horse&Rider, on sale 12 January, get your copy here