HomeExpert AdviceArticleEasy ways to get a clear round

Easy ways to get a clear round 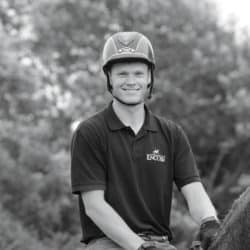 Struggling to ride a consistent clear round with your horse? Showjumper Daniel Moseley helps to get you on the straight and narrow 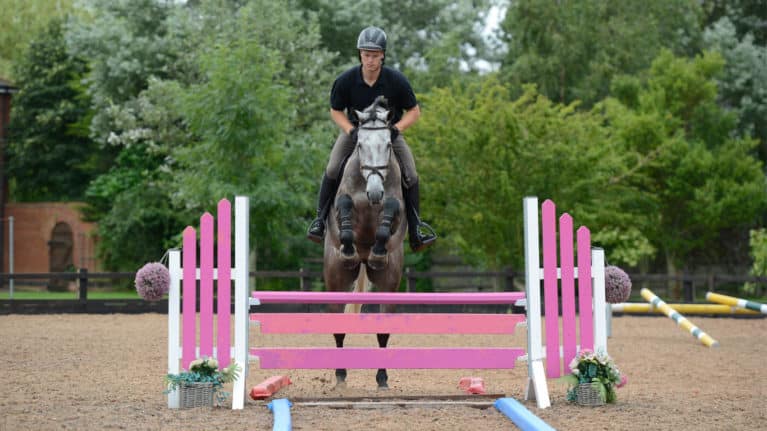 Straightness – or a lack thereof – is the biggest culprit where knocking fences is concerned. A straight horse will approach a fence firing equally from both hindlegs, which means that he’ll leave the ground with an equal amount of energy, power and balance on each side of his body. This means that he’ll be able to jump cleanly without leaving a leg. A crooked horse, on the other hand, comes into the jump unbalanced and offset, often running through one shoulder, which means he’ll tackle the fence at an awkward angle or from an incorrect distance and, unless he’s very lucky or athletic, he’ll bring the fence down. Luckily, straightness is something that you can improve with every ride, both on the flat and over fences.

Top tip – Working on your horse’s straightness isn’t just beneficial for competition success, it’s also crucial for maintaining his soundness. If your horse works straight, then he’ll build up his muscles equally rather than having a weak side that’s more prone to injury.

Focus on the flat

When jumping at home, start with the fences smaller than the height your horse would jump at a show. Jumping small fences allows you to focus on concepts such as straightness and softness while boosting your horse’s confidence. This is particularly useful for a sensitive type who might be overwhelmed or overfaced by jumping his maximum in every session, and means that you can make the approach to each fence the main focus. Once you’ve introduced new concepts over smaller fences, build up the height so you can comfortably jump a course that’s higher than you’ll jump when out competing. This will give you both the confidence to excel.

My horses do a lot of flatwork to help them to be straighter and more responsive to my aids. The main thing I aim for in these sessions is for the horse to be moving away from my leg, rather than being reliant on my hand. Incorporating simple lateral work, such as leg-yield, is a great way to fine-tune your horse’s reactions to pressure, and also teach him the difference between true straightness and bend.

Many riders go wrong because they rely too much on their inside rein. Asking for flexion with your inside rein might make it seem as though your horse is loosening up through his body, but it’s a false bend that doesn’t extend further back than his withers and causes him to drift out through his outside shoulder. Instead, bend should come from your leg aids. Ask for a turn with your outside leg, almost asking him to counter-bend – this will help him to straighten up onto his shoulder and, as a result, he’ll be connected between your hand and your leg.

Top tip  – Straightness into a fence comes from an active, forward canter. Don’t be tempted to micromanage your horse on the approach – he’s more likely to stay straight if he’s in front of your leg and moving positively. I like to use tramlines and V-poles to give my horses a visual guideline into a fence. So what’s the difference? V-poles are elevated – to set them up, place one end of each of two poles about a metre apart in the centre of a fence, widening out until the ends on the floor are level with the wings. Tramlines are poles that are placed on the floor, perpendicular to the fence. I like to use foam poles instead of jumping poles as tramlines, as they’re less likely to cause an injury if a young or spooky horse miscalculates the jump and lands on one. When you’re in the ring, one of the most common places to lose straightness and, as a result, have a pole down is in a related distance, where there’s enough strides between two fences for you to become complacent and for your horse to start wiggling down the line. This often happens because your horse has fallen onto his forehand and is no longer sitting on his hindleg. This exercise is a simple way to fine-tune your horse’s straightness and encourage him to aim for the middle of each fence.

How to ride it: Start with the fences small – no bigger than cavaletti – and approach in a balanced, active canter. Jump down the line, allowing the V-poles to guide you to the middle of the fences. This exercise will help you to feel which side your horse is inclined to fall out to and will also help you to identify if you’re uneven in the saddle.

Once you’ve identified which side your horse falls out to, block the sideways movement of his shoulder by asking for a slight counter-bend. For example, if he bulges through his left shoulder as you turn to the fence on the right rein, straighten him with your left rein and left leg, while supporting him with your right leg. You should also carry your whip on the side that he tends to fall out to, as this will encourage him to stay straight.

How to set it up: Place two small fences on a four-stride (approximately 18m) distance. Place V-poles on each fence to channel your horse into the middle of each fence.

What it does: The V-poles funnel your horse to the middle of each fence. The four-stride distance allows enough space for you to have to take responsibility for your horse’s straightness, without being so long that he’ll fizzle out or lose focus before the second fence. Because the jumps are small, you can both focus entirely on your approach, without having to worry about the height of the fence.

Top tip – If you feel your horse start to rush or fall onto his forehand, go back to schooling on the flat for a few minutes. Focus on transitions, which will help him to sit on his hindleg. You can also incorporate transitions while schooling over a course – just be sure not to pull him up in front of a fence, as this may encourage him to stop. If your horse has mastered the first exercise, you can up the ante and test his straightness by decreasing the width of the fences. This exercise will flag up any lingering straightness issues and teach you to be able to feel when you’re both straight, as you’ll only get a good jump over the second fence if you maintain your line throughout.

How to ride it: You need to make sure you keep your horse between your hand and leg the whole way through this exercise. If you’ve got control of his shoulders, then you’ll be able to stop him drifting out. The trick to this is to turn using your outside aids – so if you come onto the line on the right rein, for example, you should use your left leg and a supporting left rein to turn him, rather than tugging on your inside rein to turn.

How to set it up: Place two long fillers on a six-stride (approximately 25m) distance. Begin with V-poles on the fillers, then progress to tramlines before removing all guiding poles entirely.

What it does: This is a real test of straightness, partly because a filler is much narrower than a normal fence, but also because the six-stride distance allows more space for your horse to deviate from his line.

Top tip – If your horse really struggles to stay straight down the line, use tramlines set at the halfway point between the two fillers to help him stay on track. 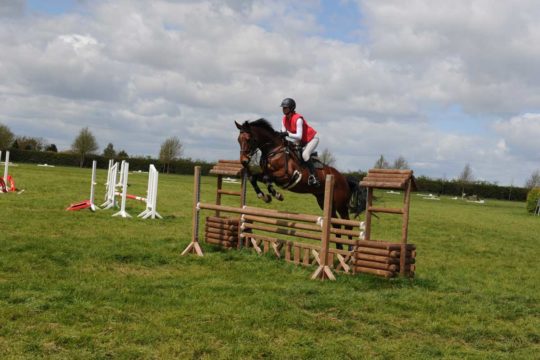