Posted in Riding Schooling and Training Groundwork and Handling 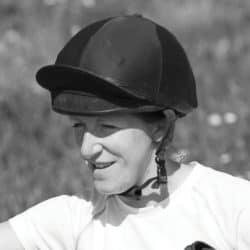 Fizz specialising in exercised-based rehabilitation for horses with musculo-skeletal injuries.

Whether you’ve been lungeing for years or want to give it a go for the first time, Fizz Marshall’s pointers will make it an effective workout for your horse 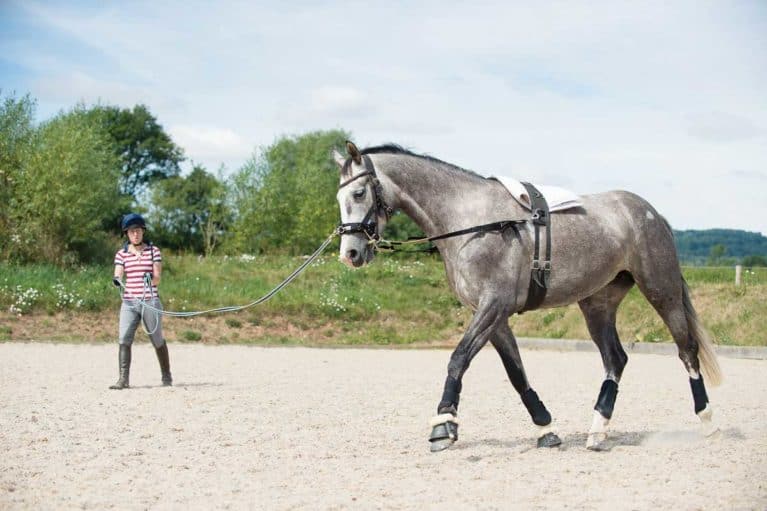 Lungeing is a really versatile form of exercise and benefits your horse in a number of ways. Whether you’re looking to loosen him up and give him a leg stretch or want to work on improving his way of going, it offers a means of riderless, weightless exercise where your horse has to do things for himself.

Whatever the purpose of your lungeing session, following a few basic pointers will help you make the most of the time with your horse.

Your lunge line is the only physical connection with your horse when you’re working him from the ground, so make sure you have
your knitting in order before you get started.

Organise your line so it’s laid across the same hand as the direction you’re starting in (left hand if starting on the left rein). Keep the size of your  loops small enough that their lowest point sits above your knee – this will ensure there’s no way you can trip over the line as you work him. Having your line evenly sectioned means you can send out a fairly consistent length each time you let go of a loop, which helps to prevent the line dropping on the ground between you and your horse.

It’s important to avoid the line touching the floor because it’s easy for you or your horse to stand on it, which can result in an accident. If the line is too low, he may even get a leg over it, which could cause him to panic. Once you have all of your kit clipped up loosely (see here for lungeing kit explained) and your line in order, it’s time to get cracking. One of the easiest mistakes to make when getting started is attempting to walk backwards away from your horse rather than asking him to walk forwards away from you. This might sound like a small thing, but it’s a really important trick to master. Walking backwards is ultimately a negative signal to your horse and is likely to encourage him to turn in and follow you rather than move away, which is what you want him to do.

However, standing in the middle of the arena and asking him to move forward away from you can leave you feeling vulnerable if he shoots off or kicks out. The best way to begin safely is to walk a small circle with your shoulders parallel to your horse’s body. Then, as he starts to step forwards, actively push your arm holding the line out and across in front of his nose to encourage him to move away from you. In this way you can create enough space between you to then ask him to move out onto the circle with less risk of being kicked if it all gets a bit exciting.

Don’t always start on the same rein. Alternating the rein you begin on will help prevent your horse becoming one-sided. It’s also a good idea to allow him to warm up in both directions before asking more of him within your session.

It’s important to allow your horse to take the line from you, rather than throwing it at him. This forms the basis of the elastic contact that’s necessary for quality work later on in your session, and also means that if he runs forward you have a good contact with him and can diffuse the situation quickly and safely.

Get the right shape

Once you’ve moved your horse away from you he can be pushed out onto a larger circle. Most lunge lines are long enough to allow a shape of at least 15 metres diameter, which is the minimum size you should aim to work on for the bulk of your session.

When lungeing, some people choose to pivot on the spot, however walking your own small circle allows your horse another few metres to work with at his end of the line.

Simply put, a bigger circle means less strain on your horse’s joints. You wouldn’t ride your horse on a 10-metre circle for half an hour, so why would you lunge on it?

One of the fundamentals of effective lungeing is establishing a contact with your horse as he moves around the circle. This allows you to control the amount of bend through his body and will help you to influence his frame. It’s essential if you want to tackle more advanced suppling exercises as he develops.

The key to this contact is the feeling that your horse is holding up his end of the line and is working in an even rhythm in each pace. Essentially, you want to feel as though there’s a spring at either end of the lunge line – one is you and the other your horse, meaning the middle part of your line is never left to drag down.

Don’t confuse speed with impulsion. Impulsion and power are inextricably linked, and power is the aim of the game. Meanwhile, excessive speed causes your horse to lose balance and fall in, leaving you feeling as though you constantly have to take up slack on the line.

Where do you stand?

Your positioning in relation to your horse is key to successful lungeing. Think of the whip as an extension of your arm and use it as as such. Rather than your horse seeing the whip as a threat or becoming desensitised to its presence, your aim is that he responds to it as and when you need to use it. Your arms make a triangle, with the lunge line and whip acting as extensions of them, and your horse’s body as its base.

Stay in line with your horse’s girth as he works around you. This ensures you continue to form the point of the triangle and helps you stay in a neutral position. Holding this position allows you to easily drop behind your horse to send him forward or move more into his eye line if needed. P is for posture

There are three aids available to you when working your horse from the ground – your voice and the whip are the first two, and you are the third. Where you’re positioned on the circle has a significant effect on your ability to direct your horse as he works, but your posture is equally important. Adopting a positive stance – with your shoulders square on to your horse and meeting his eye – will ensure he knows that your attention is focused on him and, therefore, that his should be on you. This can be very useful when asking him to move out on a bigger circle, as your body language reinforces the message being given by your other aids.

Take the chance to work on your horse’s free walk at the end of a lunge session. You’re much more likely to get an over-track in walk while he has no weight on his back and is keen to take the contact down and forward, having been working in an elevated frame up to that point. Ensuring he’s walking positively around you will help to train him that this is what you want when you’re back on board.

Being meticulous about keeping the triangle shape will help you intercept your horse if he tries to turn in, as you’re controlling him from in front and behind. Getting in front of his eye line gives him the opportunity to turn around, while dropping behind lets him cut in front of you and drop the contact on the line. If he tries to turn in, be quick to send him forward with your voice, and whip if necessary. You can drop back a little, too, to reinforce the message that he must focus on his work rather than looking for ways to avoid it. If he’s previously got away with turning in or is inexperienced, it can be a bit of a dance until you convince him you mean business, but stand your ground and he’ll soon understand he needs to focus, so stay confident and positive.

If your horse doesn’t respond to vocal encouragement to go forward or increase the amount of effort he’s putting into his work, reinforce your voice with the whip. Your horse’s engine is his hindquarters, so point the whip towards his hindlegs when asking for an upwards transition or more energy. Start by slightly lifting the end of the whip and following him with it – back it up with little flicks towards him if he doesn’t react. If you need a sharp response, a swift flick of the whip – no higher than your waist – will give a little crack that should get his attention. Be careful not to over-use the whip because it will desensitise a lazy horse, but instead mix in lots of transitions within and between the gaits, including direct transitions from halt to trot to prevent him switching off.

If your horse rushes on the lunge, the key factor is patience. Horses rush for all sorts of reasons, so think about what factors may be unsettling him. Some horses will run away from the lunge whip, so either tuck it backwards under your arm until he relaxes or, if necessary, drop it all together. Use your voice to ask for upward and downward transitions, and keep your tone low and calm, being quick to praise him when he responds. If he succumbs to the temptation to rush off, repeat a steadying voice aid and maintain a consistent contact on the line to keep him in an even, relaxed rhythm.

Just as it’s good practice to allow your horse to warm up thoroughly, warming down at the end is equally important. Detach any training aid you’re using and allow him to stretch his head and neck down. This is not only good for him physically but is also a reward for his hard work.

Another great groundwork exercise to try is long-reining, find out how to long-rein here. 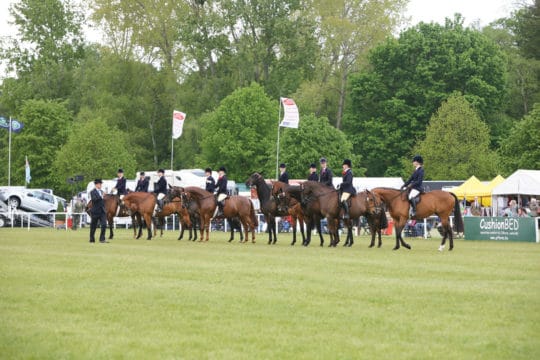 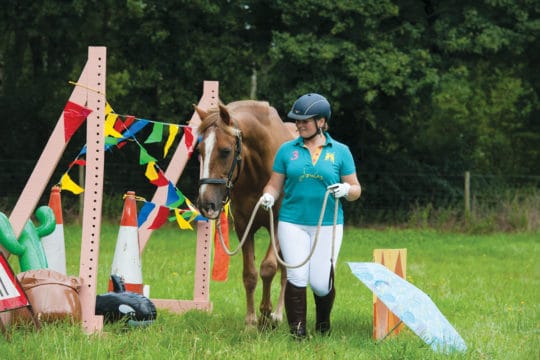 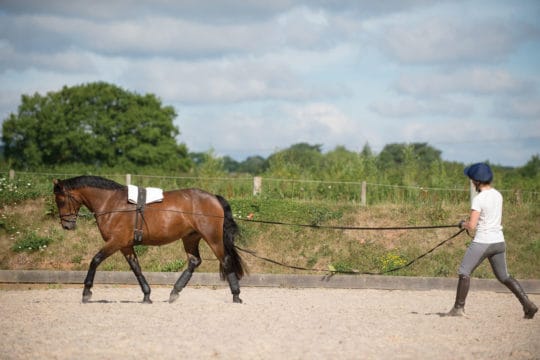