Success in the showjumping ring requires an easily adjustable horse. Tina Cook shares her simple exercises to create this quality 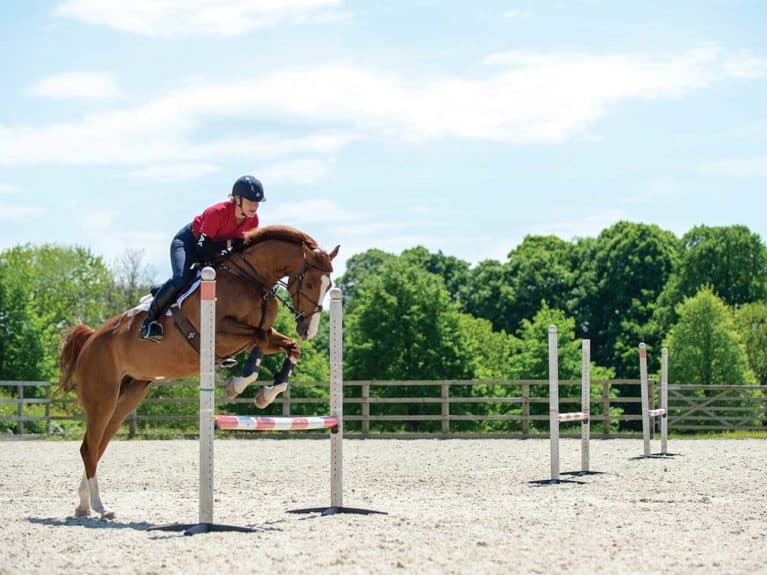 Jumping courses, both in cross-country and showjumping, are becoming increasingly technical – particularly as you move up the levels. In order to be successful, you and your horse need to be able to cope with tight lines, tricky striding, and the fences coming up thick and fast.

Luckily, the adjustability that this requires is trainable, and you don’t need lots of big fences or complicated training exercises to do it.

The majority of the jumping exercises I use at home, even when I’m working with my top-level horses, don’t involve big fences – instead, I work on improving their way of going. Once you’ve established technique and built your horse’s confidence, height becomes irrelevant because he has the skills he needs to tackle whatever you come across in competition.

These are some of the exercises I use regularly in my training.

Being able to land on the correct lead is key to producing a smooth, rhythmical round. Not only does this exercise teach this skill, but jumping on a series of curves also helps your horse to improve his balance and work both sides of his body.

Build a single cross-pole over X in your arena. This exercise works equally well on grass.

Your aim is to establish as controlled a canter as possible, with a light rein contact so your horse carries himself around the turn. Keep your circle large enough that there’s at least one straight stride on the approach to the fence. You want your horse to canter to the base of the fence so he pops over it – the idea isn’t to come round the turn and start lengthening so he stands off.

As you jump the middle of the cross-pole, open your hand and look in the direction you want to go on landing – it’s a figure-of-eight shape, so you’ll be changing rein. This prepares your horse and teaches him to pay attention to your body language for direction, using it as an indicator for which leg he needs to land on.

If your horse is a bit stiff on one rein, or has started to anticipate the exercise, turn in the same direction two or three times so you’re jumping on a circle. Then, go back to your figure-of-eight again. It’s important not to let him take charge – he needs to learn to wait for your instruction because when you’re jumping a course, he won’t know where to go next.

Ride the exercise five or six times, then give your horse a rest. Don’t overdo it, as he’ll make mistakes if he gets tired. Instead, stop and take a breather, then have another go.

Once your horse is able to change legs in mid air and is tuned into your body language, it’s time to add in some more fences. Using a three-loop serpentine, this exercise teaches him to keep moving forwards and look for the next fence. He’ll also need to develop a certain amount of agility, particularly once you start tightening up your line – great if he has a tendency to get his legs in a bit of a muddle.

Build three small uprights on the centre line, with the middle one over X. They don’t need to be big to start with – a little higher than cavaletti is enough. The aim is to ride over the three fences in a serpentine shape. Start with wide, sweeping turns, using as many strides as you need to get a straight approach towards the middle of the fence. Use the same light, bouncy canter you used in the previous exercise – you’re taking the principles you established there and applying them to a different fence layout. Again, open your hand and look in the direction you want to go as you jump each fence so your horse understands that he needs to land on the opposite canter lead to reach the next fence.

If your horse goes disunited, use bigger loops to help his balance.

As your horse gets the hang of the exercise, you can use progressively shallower loops to ride a slicker, tighter line, until eventually you’re jumping each fence on an angle. Because the jumps are an easy height, it’s unlikely that you’ll inadvertently punish your horse by having a fence down through making a mistake or becoming unbalanced in the turns. The beauty of this layout is that once you’ve mastered the serpentine, you can use the fences to ride lots of different shapes. Try…

Exercises that you can ride in different ways are great for adding variety to your training session, especially if you don’t have somebody on the ground to keep building new fences.

It’s really important to keep your training full of positivity. If your horse doesn’t understand what you’re asking, find another way to explain it or simplify the question. He needs the opportunity to figure out the right solution – developing these problem-solving skills at the most basic level will stand him in good stead when the fences become more technical. To give him the best chance of doing this, it’s down to you to get the pace and the line right, and present the question in a way that helps him to read and understand it. Help your horse learn in a way that sets him up for success.

Whether you’re showjumping or going across country, there will inevitably come a time when the distance between fences rides shorter than your horse’s natural stride. Not only does putting a pole between fences encourage him to make a better shape over them, because he’s looking down at the pole, but it teaches him to use his back and compress his stride before stretching over the second part of the combination. It also means he can’t treat the fences as a bounce when you shorten the distance – he has to take that stride in the middle to avoid landing on the pole.

Build a small vertical, then two strides (11m) to a pair of small oxers with one stride (7.5–8m) between them. Put a pole between the two oxers. Adding the vertical and making this exercise part of a grid helps you to get the right canter and stride into the first oxer, meaning that once you’ve set your horse up, you can sit quietly and allow him to take you through the combination. Avoid the temptation to fiddle with his stride or nag him with your aids – if you’re in the correct position and have set him up with the right line and pace, then it’s down to him to jump the fence.

Once you’ve ridden through the grid a few times, start to close up the distance between the oxers so it’s a shorter single stride. Do this very gradually – the idea isn’t to catch him out. However, if he catches the front rail of the oxer because he hasn’t shortened up enough, he’s got to learn to snap his legs up. It doesn’t matter if you knock poles down at home – doing this in training reduces the chance of it happening at a competition. Adjustability isn’t something that happens overnight – instead, it comes with regular, targeted training. Increase the difficulty of the exercises gradually over the course of several sessions so that you can grow your horse’s confidence and make learning an enjoyable experience for him.

With thanks to Connolly’s Red Mills for their help with this feature, redmills.co.uk 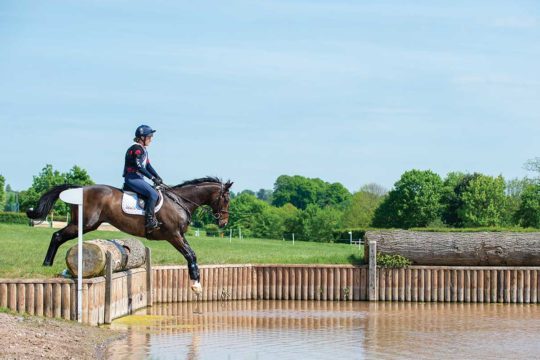