Sidebone is a common problem and many owners don’t even know their horse has it. Vet David Rutherford, from Fellowes Farm Equine Clinic, explains 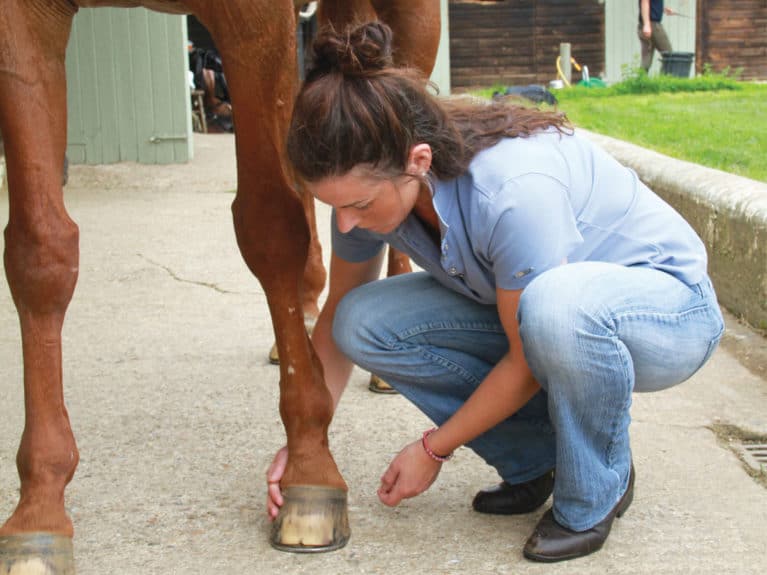 You may have heard of horses having sidebone before, but what exactly is it? Just above the coronary band on the inside and the outside of your horse’s pastern is a piece of firm but flexible tissue called the lateral cartilage. It supports the hoof wall and cushions the heel during weight bearing. However, sometimes the lateral cartilage mineralises and turns into bone, becoming hard and inflexible – a condition known as sidebone.

Sidebone is quite common and it…

It’s thought that there’s an underlying genetic predisposition to the development of the condition, but limb conformation, foot imbalance and repeated exercise on hard surfaces may also contribute to the problem.

Fortunately, sidebone only causes lameness in a minority of cases and it’s often an incidental finding during a vetting or investigation of other problems. If it does cause lameness, this usually only lasts a few months while the sidebone is forming or if established sidebone is fractured by an impact. Normally a hard bulge can be felt above the coronary band on the side of the leg, causing asymmetry in the pastern. Finding the source of pain

If your horse is lame, it’s important to determine whether the sidebone is to blame for this discomfort. Your vet will carry out nerve blocks and X-rays, but sometimes advanced imaging techniques such as MRI, CT or bone scan are required to determine if the sidebone is active and whether it’s the cause of lameness.

While it’s unusual for sidebone to cause lameness, if your vet has confirmed that it’s causing your horse pain, he’ll need treatment. Time and rest to allow the active, inflamed sidebone to settle down is important, which usually takes four to six months. During this time, your horse will need painkillers, anti-inflammatories and corrective farriery.

It’s vitally important that your farrier trims your horse’s feet in balance so that they land flat when he walks. Wide webbed shoes seated well back to the heels or straight bar shoes are commonly used to help horses with sidebone, often in combination with a cushioning material or rubber pad under the shoe to reduce concussion.

Ideally, affected horses should work on softer surfaces while they’re returning to exercise, and trotting on the road should be avoided. Overreach boots are helpful for protecting the area, because trauma to the sidebone can cause fracture, which makes horses very lame.

Looking to the future

The prognosis for this condition is usually good, although it very much depends on the size of the sidebone…

Neurectomy is where the nerves to the hoof are cut at the back of the pastern to permanently desensitise the horse’s foot. It’s not a common procedure as there are several potential negative side effects – for example, removing the signs of pain that indicate other problems, such as hoof abscesses, and the formation of a neuroma, which is a mass of nerve tissue that’s very painful – and it’s illegal to compete in many disciplines following the procedure. The last options are retirement or euthanasia if the lameness is ongoing and the horse can’t be made comfortable, although thankfully this outcome isn’t common Thank you. This was more informative than any other source, and more positive, too ?