Suspensory injuries are notoriously difficult to heal successfully, but there could be a new treatment on the horizon, as vet Dr Sue Dyson from the Animal Health Trust explains 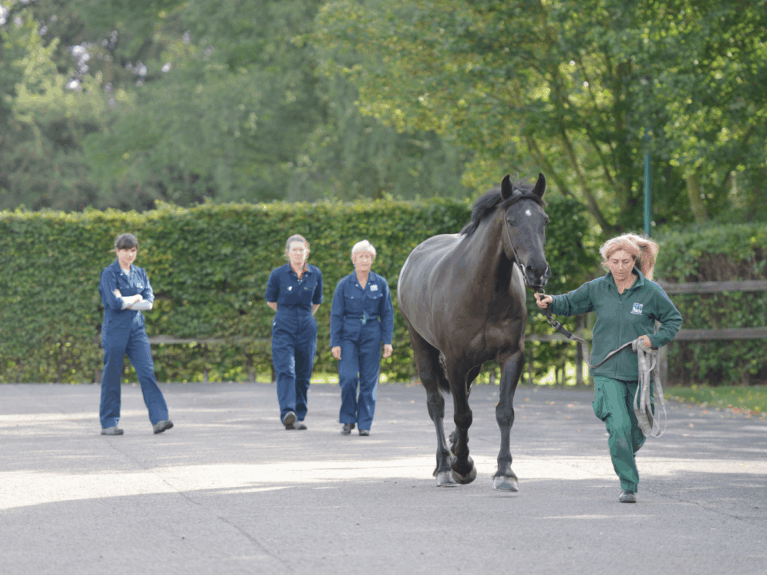 Any injury to your horse is devastating, but particularly a diagnosis of suspensory ligament injury, because they often take a long time to heal and can be prone to reinjury. How well your horse will recover from suspensory damage depends on which part of the ligament is injured and how bad the damage is, but severe injuries are often career limiting. However, if you’re clued up on signs of potential injury and can target a problem early, the chances of your horse making a good recovery are significantly increased.

Where is the suspensory ligament?

It sits at the back of the leg and starts at the top of the cannon bone in both the forelegs and hindlegs. About two thirds of the way down the cannon bone, it divides into two branches that run to the inside and outside sesamoid bones. There’s a close relationship between the branches and the splint bones, and with some injuries there may also be a fracture of the lower part of the bone. The fetlock joint is sometimes involved, too, and enlargement of the joint capsule with excess synovial fluid may indicate tearing of fibres involving the joint.

PSD and injuries to the branches are common in sports and leisure horses, and may occur in one or both forelimbs, or one or both hindlimbs. These injuries may be the result of a single traumatic event – for example, a horse jumping onto the side of a bank and pulling a front shoe off, resulting in abnormal loading of the suspensory ligament – or due to repetitive overload.

Injury to the body of the ligament is unusual in sports and leisure horses, although it can occur as a result of PSD or branch injuries. Suspensory body injuries are usually seen in racehorses.

Suspensory injury is a common cause of lameness in all types of horse, however there are certain risk factors…

Occasionally, young horses develop suspensory injuries in more than one limb, despite having done little work. These horses may be genetically predisposed to injury.

The signs of a suspensory injury depend on which part of the ligament is injured, but there are a few things to look out for… Forelimb PSD is usually characterised by a lameness that’s at its worst when the affected limb is on the outside of a circle on a soft surface. In the early stages, the lameness may improve quickly with rest, but recur when work is resumed. Branch injuries and hindlimb injuries have less consistent patterns of lameness.

Branch injuries can occur without detectable lameness in some horses, but in other horses the lameness is obvious. However, when the body of the ligament is injured, lameness is usually clear to see.

Because there are often no definitive signs, your vet will need to perform nerve blocks to determine the source of the pain. Once the area has been pinpointed, it can be assessed using ultrasound and X-rays. If the severity of the lameness is disproportionate to the amount of ligament damage identified on the ultrasound scan, it may be necessary to perform a bone scan or MRI to check the cannon bone hasn’t been damaged where the ligament attaches to it. If it has, the injury will normally take longer to heal. The operation involves cutting the main nerve to the ligament (neurectomy), and cutting the band of tissue that squashes the ligament between the back of the cannon bone and the splint bones (fasciotomy). However, a perfect cosmetic outcome can’t be guaranteed – some horses have a small curb-like swelling at the surgical site and sometimes a few white hairs. The length of recovery after surgery depends on the severity of the injury, but most are able to begin ridden work after two months, while more severe cases can take 6–9 months.

Some horses develop a thick rim of fibrous tissue around the injured branch that can itself be prone to repetitive tearing and these cases are particularly challenging to manage. There is some unpublished anecdotal information from the USA that the use of a high-frequency laser may be helpful in this instance. The Animal Health Trust has just acquired such a laser, but it will take several years before we know how effective it is.

Catching it early is key

As with any soft tissue injury, recognising the problem early and treating it appropriately is the key to successful management. This is because if injuries go unrecognised, other problems may develop, which can hinder your horse’s chances of recovery – for example, a proportion of horses who’ve had PSD in their hindleg for a while develop pain in the sacroiliac region, which can become a limiting factor for future performance.

In addition, the Animal Health Trust has recently reported on a group of horses who had injuries of the top of the check ligament on the back of the knee, which were associated with PSD. It’s thought that these check ligament injuries occurred as a result of the PSD. So far, these horses have responded much less well to treatment, emphasising the need for early diagnosis and appropriate treatment.

Suspensory ligament injuries are tough to prevent, but there are a number of things that will help lower the risk… Taking steps to help lower the risk of suspensory injury will always be beneficial and it could help prevent many other types of injury, too. But the most important thing is to be able to recognise when an injury has occurred so it can be treated promptly, as this is crucial for successful healing.

While recent PSD injuries in the forelimb can be managed with a relatively low risk of recurrence, injuries to the branches of the suspensory ligament can be much more challenging. However, it’s hoped that the new high-frequency laser treatment might be the way forward, offering hope to horses with career-limiting injuries.