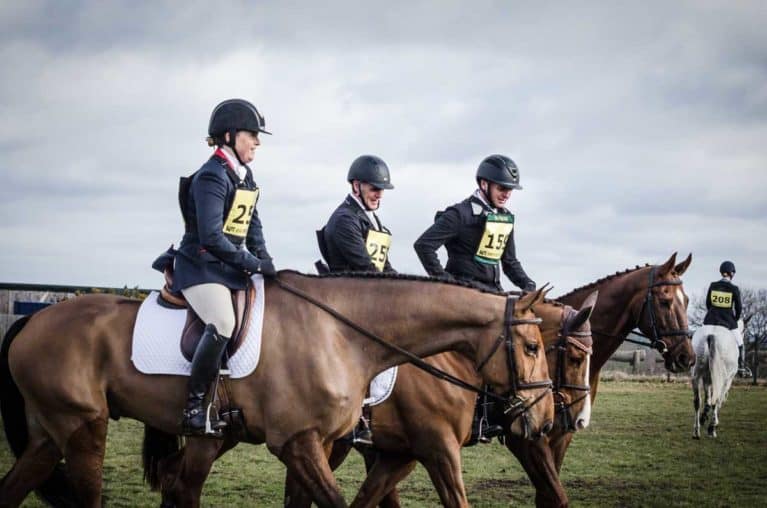 We’re on the final countdown back to something like normal now, with British Eventing set to resume operations from July 10 at Tweseldown Horse Trials in Hampshire. It might not be eventing quite as we know it – after all, ‘the new normal’ is just part of our everyday vernacular now – but for those of us who live for that cross-country adrenaline rush, there’s not much that could be more welcome. After a few months of daydreaming about being out and about, here’s what we’re really looking forward to as the season commences…

No matter how old you are, there’s nothing that feels more delightfully Saddle Club than after-hours in the tack room, scrubbing away at slightly gummy tack with the radio chattering away in the background. Even better is closing the tack locker door after 9pm, knowing that everything’s sparkling, nothing’s been left behind, and you’re now free to do that most essential bit of eventing prep – a supermarket sweep, leaving a heady whiff of leather grease, WD-40 and plaiting gel behind you as you ransack the choccy aisle.

The nature of your lorry park patter will vary throughout the day. Upon arrival, it’s bellowed hellos as though you’ve not seen one another in years. (In actuality, you saw one another the previous weekend in another field in the middle of nowhere, but so much can happen in six days, right?) As you ride past a friend’s box en route to the collecting ring, it’s a bit more high-pitched – “what on earth are we doing?! Stupid sport, this,” said with a laugh and a give-away twitch – and upon returning home from cross-country, it’s a bit like coming back from the war, regaling the horrors and the triumphs encountered in that far-off land.

With social distancing rules in place and enforced, the lorry park social scene might change a bit – there’ll be no nipping into next door’s living to sample a homemade batch of fruity gin – but there’s no need to worry that conversation will be killed off by a mere 1m distance. Eventers are possessed of an extraordinary natural volume, like grubby, sweary Barbra Streisands. All the world’s a stage, baby.

There aren’t many sports in which amateur competitors get to compete against their heroes, but eventing offers the golden opportunity for us mere mortals to pit our wits against Badminton and Burghley winners, Olympic heroes, and veritable legends of the sport. Nothing will make you feel as uniquely alive as spectacularly missing your distance to a warm-up fence and losing control on the landing side, all under the resigned gaze of Andrew Nicholson.

Starters are a bit like anaesthetists, in that each of them has their own method of relaxing their patient (erm, competitor) as they count down to go-time. Unlike anaesthetists, though, everyone has a favourite starter – the one that just gets your need to babble about the perfect Victoria sponge recipe you concocted last weekend in order to distract yourself from the half-tonne of hairy idiot you’re about to try to pilot over solid obstacles.

Many a writer has tried, but no one can quite encapsulate the sheer joy and the suspension of normalcy that happens when you take that first surging stride out of the start box. If that feeling of sudden boldness and joie de vivre could be bottled, it would be the world’s most potent high.

On any normal day, you’re a rational, functional adult, making sensible decisions and exhibiting admirable leadership qualities as you steer the Good Ship Adulthood. At an event, you’re getting lost between fences four and five because you got distracted trying to salute a magpie, lost your whip and nearly ran over a Pony Clubber on a course walk in the process.

Truly, this is the unsung adrenaline champion of eventing. Many hours are whiled away anxiously wondering if you should have used a Super Ballot rather than a regular ballot while waiting for an announcement that invariably comes out a full twelve hours later than expected. Those who’ve put in entries for eventing’s inaugural weekend back might be questioning if this is something they’ve missed right now, but admit it – doesn’t it feel delightful to lose sleep over something as extraordinarily inconsequential (relatively speaking, of course) as an entry?

What did people do before the advent of Facebook groups and Shoestring Eventing? Probably girded their loins and planned to just kick on at whatever they found on the day – but luckily for us, we can schedule in several weeks of overthinking instead. It starts when you’re planning your entries – every venue you’ve never been to gets the three-part assessment, with a social media stalk, a Shoestring ‘walk’, and as many shaky helmet-cam videos as you can stomach on YouTube. Then, once your entry’s in, you wait with bated breath for the 2pm course opening, upon which you either jump in your car with the CrossCountryApp fired up and waiting for action, or you refresh the #twittereventing Facebook page until your clicker finger gets a cramp. It’s a lot of anxiety for a bunch of 90cm lumps of wood in vague house shapes, but it’s part of the process and it mustn’t be skipped.

Going out eventing is a little bit like being at an airport: time stops meaning anything (except in that final mad dash to make it to your dressage test), calories don’t count, and money is inconsequential. This means that your quick trip to the on-site tack stand to replace a lost stud turns into a no-holds-barred £350 extravaganza, with ample justification offered for every purchase made. Of course, all this new stuff means that you need to put it all on and run around the lorry anticlockwise a couple of times before you mount up, otherwise it’ll be bad luck. But don’t worry – you can recoup the energy lost at the burger van. Extra onions, please, I have a three phases to survive and absolutely nobody coming within a meter of me all day.

The event is over, your pride and joy is tucked in the back with enough padding that you’d be willing to post him home with MyHermes, and you’re heading homeward with your fifteenth instant coffee of the day keeping you sane(ish) and awake(ish). Your road trip entertainment? Planning your social media run-down of everything that happened through your day, replete with the £200 worth of pictures and videos you’ve just bought and enough detail to rival William Fox-Pitt’s autobiography. You know just how it’ll start…