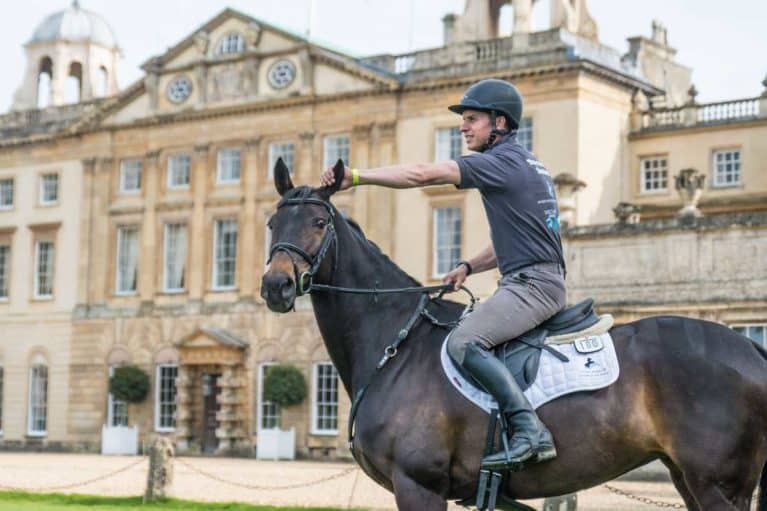 We’ll admit we’re all having a bit of a sulk here at H&R – after all, the beginning of May is meant to be spent in the middle of a field in Gloucestershire, battling for a shred of 3G and then giving up and giving in to the sights, sounds and stories of Badminton Horse Trials. Here are some of the things we’re feeling particularly nostalgic for…

Admit it – once you drive through those gates, the outside world simply stops existing. Your job? You couldn’t tell someone what you do for a living if they asked. Your partner? A vague and distant memory. Global political crises? Don’t be silly, there’s a leading horse in the hold box and that’s far more interesting.

Particularly pertinent if you’ve had to watch the first phase from home, itching to be in Gloucestershire. Once you get off the motorway and start wending your way down the A46 to the event, you can start to pick up signal from Badminton Radio, ushering you through the traffic jams and giving you a taste of the day to come. Suddenly, it all becomes very, very real.

Jumping a truck seems like the sort of thing that the village idiot might suggest after a few too many pints at your local, but no – it’s a real thing, and actually, the calibre of the competitors at Badminton makes it look easy. Perhaps not one to try at home, though.

If you find that you ride better after a few days away at Badminton, it’s no coincidence – after all, you’ve just been surrounded by the very best in the world, and it’s only natural that you’ll pick up on some of their technique, plus their gumption and gutsiness, without even realising it. For those who want to absorb as much knowledge as possible, there’s no better place to be than the fence line of the collecting ring, where top riders and top trainers convene to coax leaderboard-challenging performances out of their charges. Plus, we just really enjoy how tiddly our own courses look after watching a five-star.

Many people overlook the humble week-opener at Badminton, but that’s their loss – there’s grassroots action to catch, the first horse inspection in the afternoon, shorter queues to get in and easier access to the trade village. Those in the know arrive early and enjoy a wander around the village – you’re sure to bump into competitors out hacking or at the tiny village shop, which is staffed by some of the jolliest people you’ll meet through the week. After a little pipe-opener the best course of action is to head into the event for a coffee and head to the front of the house to enjoy it in the company of grazing five-star horses. Utter, utter bliss, and the day only gets better from there.

That is to say, cost and calories don’t count and it’s never a bad time for a tipple. So you fancy pheasant goujons and a double G&T for breakfast, having just dropped a deposit on a set of fillers reminiscent of a Disney shop on an acid trip? You’ll struggle to find anyone to judge you at Badminton.

We’re not talking about the Royals – although there’s plenty of those floating about, if that’s what you’re into. Instead, Badminton is the best spot in the world for unrivalled horsey celeb-spotting. Is there any better impromptu buzz than the one you get when you bump into Andrew Nicholson or Clare Balding at the coffee van? We think not.

Okay, so it might mean getting in at sparrow’s fart in the morning, but you’ll never regret it when you have to carry four lunge whips, ten 2-for-1 buckets, the entire contents of the Joules stand and your new fillers back after a long day of gin-quaffing.

There’s no better place to close out the day than at the lakeside bar, and there’s no better sight to see than a saturated pink sky cascading down over the big house. It’s almost as magical as the competition itself. Almost.

Somehow, no matter what happens, it always feels as though the Badminton trophy goes to the right person. There was Piggy March in 2019, who won her first five-star when Oliver Townend – her ex-boyfriend, no less – bypassed the optimum time in showjumping by a fraction of a second. Or Andrew Nicholson, who finally lifted the trophy on his 37th attempt, partnered by the unassuming Nereo. How about Michael Jung, who had won everything there was to win in the sport by 2016, except the coveted Grand Slam? It seemed almost inevitable that he’d take the title at Badminton and he did, giving us all the glorious thrill of living through a milestone moment in eventing history.

Whichever way the trophy goes, there’s always a story behind the win – one of incredible ups, colossal downs, tears and serendipitous moments, unlikely horses and extraordinary twists of fate. We can’t wait to be a part of the next chapter.