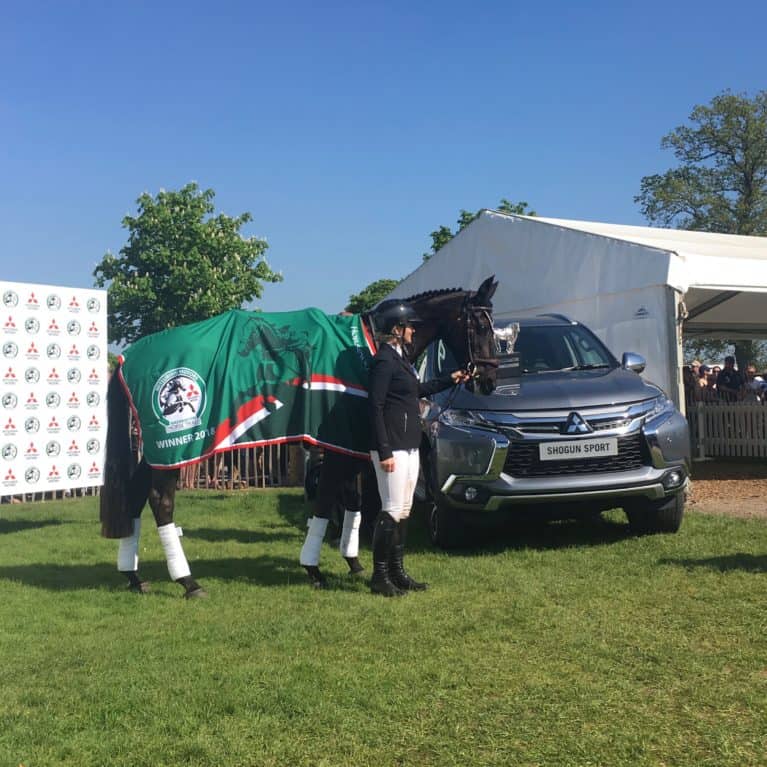 It’s been 11 years since a female rider won at Badminton – the last one was Lucinda Fredericks, riding Headley Britannia in 2007. Now, another all-girl combination has clinched what’s arguably the most coveted trophy in eventing.

To those who only keep half an eye on an eye on eventing, it may be surprising to hear that Jonelle Price has never won a four-star event before today. “I was beginning to wonder if it would ever happen,” she said after her winning showjumping round on super-mare Classic Moet (Molly). “But sometimes you’ve got to believe.”

A blindingly fast cross-country round – Jonelle and Molly’s trademark – had moved them up from 22nd place to become overnight leaders. However, the pressure was on and, thanks to an incredibly tightly-bunched field, they could only afford one fence down if they wanted to get their names into the Badminton hall of fame. A few rattled poles kept the crowd on the edge of their seats, but the pair turned out not to need their small buffer.

To put their round into perspective, this is the first time Molly has jumped a clear round at an international event since 2014. She and Jonelle also had most of last year off, as a result of Jonelle’s pregnancy and subsequent birth of her son, Otis.

Husband Tim, who finished 12th on Ringwood Sky Boy, was full of praise for his wife. “She pulled it off, she’s amazing. It’s an amazing achievement, but in the cold light of day, so much hard work has gone into this.”

Oliver Townend, who came to Badminton aiming to complete the final leg in the Rolex Grand Slam of Eventing, had to settle for the runner up spot with four-star debutant Cooley SRS. “He’s never jumped like that in his life,” he said after a beautiful clear round that saw them jump up from fifth place. “I’m still living the dream from winning Kentucky last week, there’s no complaints this end.”

He was also full of praise for Classic Moet. “I’ve never a seen another horse like her – I don’t think we’ll see another cross-country horse, mare or gelding, like that again. She’s a freak of nature, I’d give anything for a foal out of her.”

Ros Canter posted her best ever result at a top-level competition. She and Allstar B finished the dressage phase in third place and managed to carry this all the way through, despite an uncharacteristic pole down. “He was fantastic,” she said afterwards. “As I came out of the prize giving, it suddenly started sinking in what we’ve achieved and also what we could achieve in the future. We’ll be having a party when we get back home.”

In fact, Kiwi Jonelle was the only non-British rider in the top five. Oliver’s second horse, Ballaghmor Class, finished in fifth, while Gemma Tattersall and Arctic Soul pulled off their third clear showjumping round at Badminton in a row. “I can’t explain how happy I am,” gushed an emotional Gemma. “It’s a seriously tough course and he’s tired from yesterday, so I was prepared to have one down. I’m so proud of him.”

Before the start of the competition, there were many who expected Michael Jung would walk away with another four-star title. However, a fairytale finish to what will reportedly be Sam’s final visit to Badminton wasn’t to be. Two fences down dropped them from fourth to tenth, although the fact that the now 18-year-old Sam is still able to pull off such a high placing is just further evidence for those who deem him the best event horse ever.

As it happens, it turned out to be not just Sam’s final Badminton. After withdrawing him from the hold box at this morning’s vet inspection, Andrew Nicholson officially retired his faithful partner, 18-year-old Nereo, in front of a standing ovation in the main arena after the traditional parade of competitors. “In my mind, I was always going to retire him here,” he explained. “Apart from Michael and Sam, there aren’t many who’ve been here year after year and still been competitive every time.” Nereo will now partner Andrew’s daughter, Lily, who’s started riding him at home.

As the sun sets on another glorious Badminton weekend, here’s the final top ten…

As the sun sets on another glorious Badminton weekend, it’s important to reflect on everything that’s happened over the past four days. It’s been typically action-packed, filled with highs and lows, thrills and spills, personal bests and first-time finishers. Two of eventing’s all-time great horses, Nereo and Sam, galloped around the park for the final time. Ultimately, however, the weekend belongs to one lady and her incredible mare. During the final press conference, Jonelle was asked to sum up her win in three words. “Dream come true,” was her eloquent answer.

Big shout-out to the team at Equiratings for all their top Badminton stats this weekend. If eventing-related numbers float your boat, check out equiratings.com or follow them on social media.