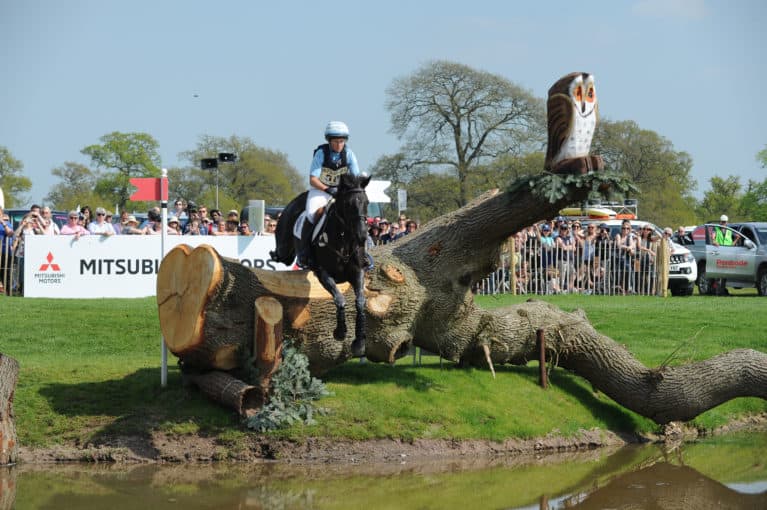 Badminton’s most famous phase provided a day of high-octane excitement that kept things exciting right until the very end. H&R reveals the high points of the day

Cross-country day at Badminton was one ruled by time penalties. With nobody achieving the time limit of 11.49 minutes, it became a balancing act of minimising time penalties while respecting the sticky, holding ground.

One of the first combinations out of the start box was Andrew Nicholson and Nereo, who won here last year. They clocked up 7.2 time penalties, rising them to 12th with a score of 37.5. ‘The ground’s soft, but it rode as I thought it would’, was Andrew’s summary of the course. “It’ll be a big test for Sam [La Biosthetique-Sam FBW, Michael Jung’s ride].”

It wasn’t just Andrew was interested to see how the former Badminton champions fared – all eyes were on Michael and Sam as they left the startbox. Sam was very keen to be off, but the round that followed wasn’t quite the smooth showing we’ve come to expect from them. That being said, it was still a lesson in effective cross-country riding that resulted in one of the quickest times of the day. “We’ve had nicer rounds,” said Michael, “but it’s a great feeling when you see how much he still loves it. It’s nice to sit on him and just enjoy it.” This was likely in reference to the fact that he’s made the decision not to run Sam in any more team competitions.

Ros Canter and Allstar B built on Thursday’s personal best dressage score with their fastest ever top-level cross-country round, preserving their third placing. “I’m so proud of him,” gushed Ros. “It’s the first time he’s ever had to dig deep, but he kept going. He just stepped over the Vicarage Vee – what a star!”

It was no surprise to many that the rider who came closest to the time limit was the ever-speedy Jonelle Price, who cruised round on Classic Moet to add just 0.4 penalties – or one second – to her dressage score of 27.6. They’d previously been lying in 22nd place, but rocketed into the lead. “She’s some mare,” said Jonelle after their round. “She’s not everybody’s cup of tea as she has a funny way of going, but she’ll do for me.”

Grand Slam-hopeful Oliver Townend had finished the dressage in the top spot with Ballaghmore Class. The penultimate cross-country rider of the day, he needed to be no more than 17 seconds over the time to hold onto his lead – he came home in 18. This put him on an equal score to Jonelle, with 28.0. However, given that Jonelle was closer to the optimum time and there are no tied placings going into the showjumping, she now overtakes Oliver to become overnight leader.

Here’s the top ten going into the final phase…

There’s not even a pole separating the top four riders, meaning that a clear round is essential to not dropping down the leaderboard. There are also many more combinations nipping at the leaders’ heels, so the competition is likely to come down to the wire. You can find out how it all pans out by checking the Horse&Rider website and social media feed.