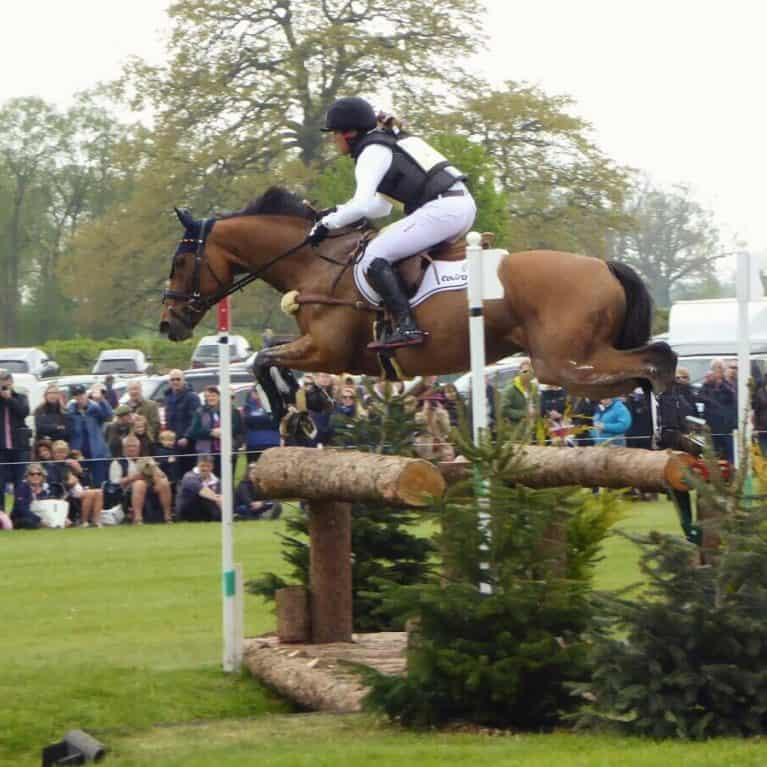 “It’s a proper course,” laughed Andrew Nicholson after his first ride of the day, aboard Rosemary Barlow’s Qwanza. It’s not often you find yourself holding your breath when ‘Mr Stickability’ tackles a fence, but he proved true to his nickname and demonstrated the benefits of years of experience when the mare deviated from her line mid-course. “Well, I had to add in a stride, but I kept going!”
Not many have been so lucky today over Eric Winter’s immense course. It’s been a morning of movers, shakers, fallers and plenty of time penalties but those that have completed have done so with huge smiles and exclamations of gratitude to their mounts. One such rider is Lissa Green, daughter of eventing legend Lucinda, who makes her Badminton debut this weekend aboard the diminutive – albeit strong – Malin Head Clover. The pair had an unfortunate 20 jumping penalties, and picked up an assortment of time penalties, but Green was thrilled to have crossed this formidable four-star off her list.
“The whole round was hairy, but I’m absolutely buzzing,” she said. “You can’t showjump this course – you’ve got to go in and attack it, and have fun. It really is just so much fun!”
Her huge smile and high spirits could only be matched by those of Alexander Bragg, whose early ride with his first horse, Zagreb, has put him into 2nd place at the halfway point. Bragg, who played rugby before his wife’s pregnancy left her horse without a rider, praised the sport for its familial spirit.
“It’s a true community and I’m so glad to be here. I can’t describe the adrenaline I’m feeling.”
The star round so far undoubtedly belongs to the indefatigable Michael Jung, who piloted La Biosthetique Sam FBW to a clear round inside the time – the only rider to manage this so far. Taking calculated risks, he made what has proven a diabolically tricky course look easy, and currently holds the lead. He credited his team with his success.
“I’m lucky to have a great team, a great girlfriend and a great horse who I trust so much,” he said. He rode with JungBerry – one of the Wilberry Wonder Pony family – strapped to his back in an homage to Hannah Francis.

Keep us bookmarked as we bring you further news through the day, as well as a detailed round-up after the completion of the day’s competition.