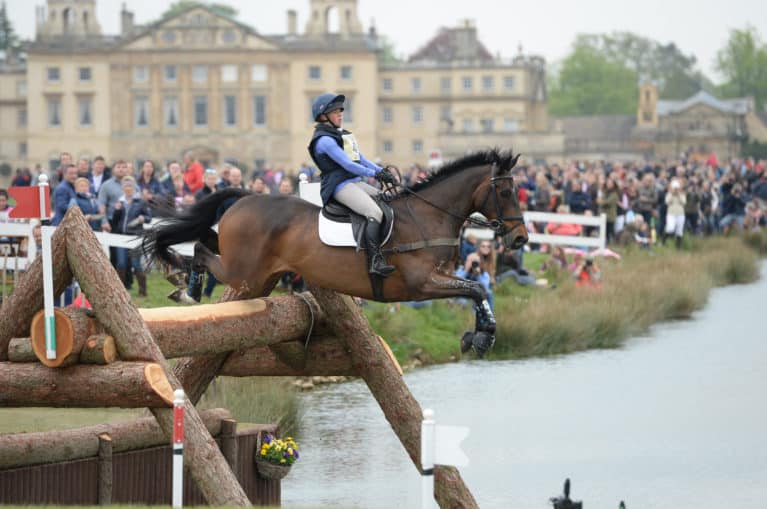 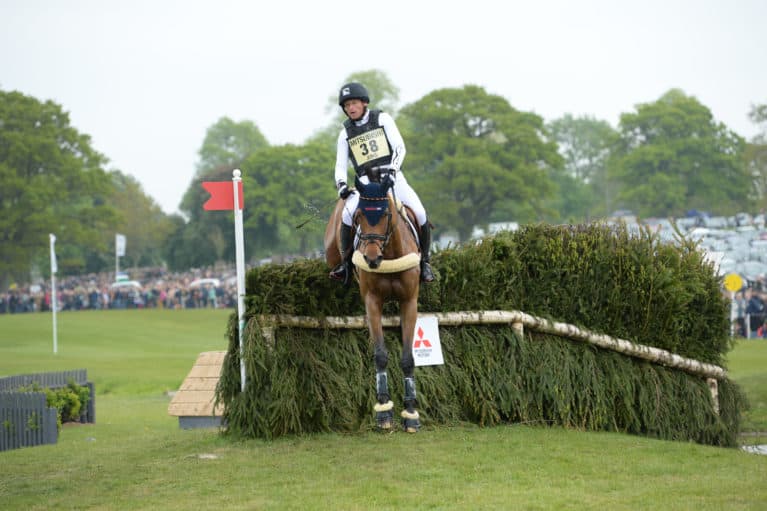 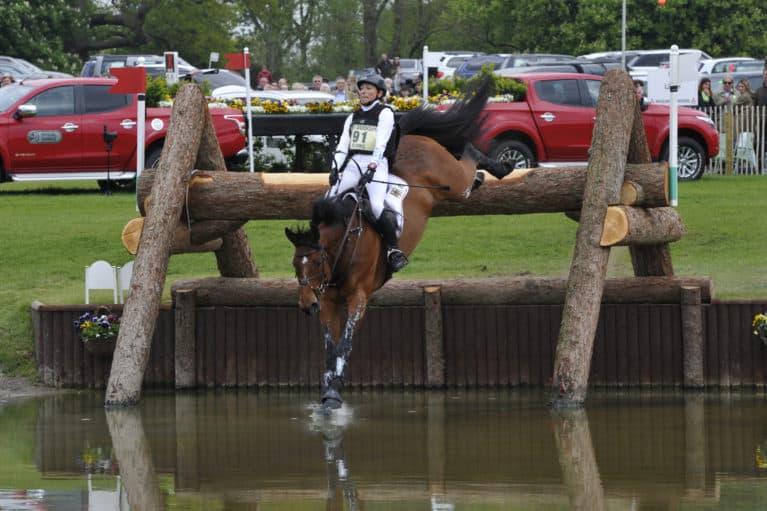 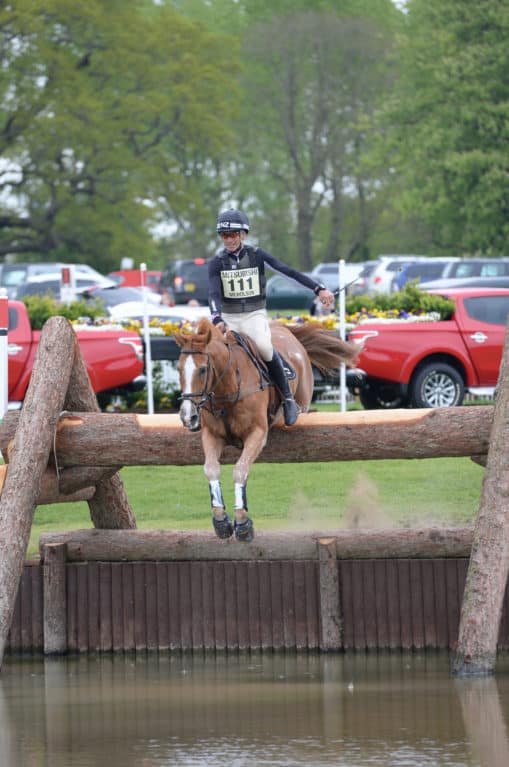 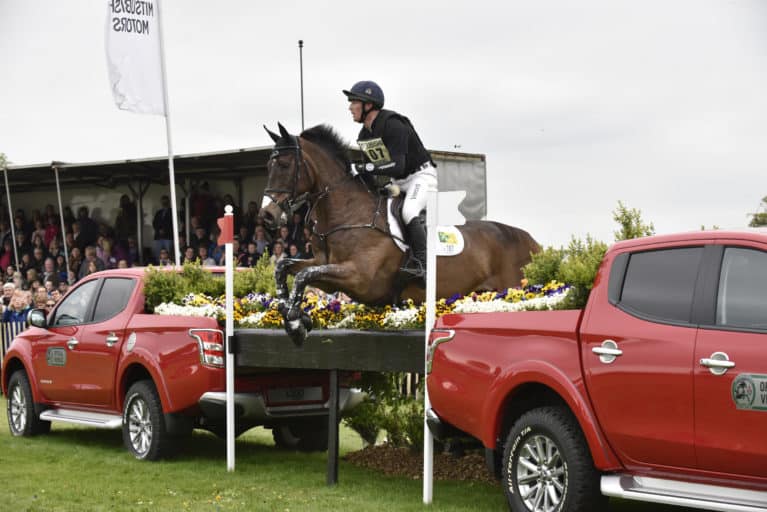 Cross-country day was to be vintage Badminton, as riders who had been pre-emptively ruled out of contention after the first phase climbed a staggering number of placings to threaten the leaders, and others who had been tipped as fail-safes notched up mistakes and unfortunate glances to drop out of the running.

81 combinations left the start box to tackle Eric Winter’s challenging course, but only 49 of those would complete – and only 32 of those without jumping penalties. By the end of the day, only two riders would complete within the optimum time – Michael Jung, in second place, and Tim Price, whose exemplary display of top-class cross-country riding would move him up from 34th after dressage to 4th.

“Did that look easy? It didn’t feel easy!” he laughed. “You’ve got to fight from the moment you leave the start box. What Xavier Faer lacks on the flat, because he doesn’t really put himself together, he makes up for when he’s galloping. He’s the right type for going at speed around a big course like this. He can help you out and think for himself, which is great fun as a rider because it means that we don’t have to do all the jobs. He did that today, definitely.”

Price’s great round was a welcome one, as it comes on the back of a string of bad luck that he, and his devoted following, has been hoping to see him overcome.

“I’ve been fed up with a few lacklustre performances recently, and I just thought that this horse had this round written all over him, but I had to go for it. So I decided to do that rather than the usual recipe, which is to start them out and take the time to find your rhythm. The ground was so good today that I decided to just go for it, and he just got better and better as he went.”

Jung’s round earlier in the day was nearly foot-perfect, and while he took risks by angling difficult lines they paid off in shaved seconds, allowing him to cruise home easily.

“It was a tough course and you had to concentrate from the beginning,” he explained. “If you had a problem there was never an easy fence afterwards to give the horse a positive feeling, so you needed to have a good rhythm and that positive feeling the whole way, and you needed to feel that your horse had enough energy to jump the big fences and verticals at the end.” Jung’s partnership with the indomitable La Biosthetique Sam FBW has been much-discussed – after Olympic, World and European gold medals, as well as the Rolex Grand Slam win, it’s hard to imagine what sort of question would prove too difficult for the pair to answer.

“I know Sam very well – he’s a fantastic horse. He’s very clever and concentrated,” said Michael. “He was a bit strong in the beginning but he came back to me in a good rhythm. He trusts me, and I trust him, and that partnership is the most important thing, because then you can be brave and take risks.”

Jung and Price were two of the several riders who tackled the course with a Wilberry Wonder Pony mascot attached to their backs. The stuffed pony is an homage to the late Hannah Francis, a young eventer whose incredible tenacity, optimism and courage in the face of a terminal cancer diagnosis created a rallying point in the equestrian community which has continued on in the form of the Wilberry charity. Another supporter today was Gemma Tattersall, whose Wilberry looked distinctly windswept after hitching a ride aboard the fast and feisty ex-racehorse Arctic Soul.

“He’s nuts, which is why he’s so good at cross-country,” laughed Gemma, who was disappointed to be joint-67th after a tense dressage test yesterday. Her quick clear, with just 4.4 jumping penalties, moved her up to 12th at the end of today’s competition. “There’s a lot of pressure when I ride him – people say ‘he’s the best cross-country horse in the world, of course you won’t have a problem!’ Well, yes, he is amazing – but he’s big, and he’s strong. He’s 17.1hh and I’m only 5’5, and that strength requires piloting. He’s not an easy ride! For the first time, I was tired – last year, I wasn’t at all, but this year’s course was so tough and intense that even he was tired near the end. We all had to fight for it today.”

Oliver Townend also saw a drastic reversal of fortunes on his second ride of the day, the four-star debutant ODT Ghareeb. His earlier ride, Samuel Thomas II, had added 26.8 penalties to his dressage score, moving him to 28th place, and Oliver rode assertively to earn a positive clear round aboard his second horse. His classy round moved him an incredible 40 places up the leaderboard to 7th place.

“He tried, and he tried, and he tried,” said Oliver. “And fair play to him – he feels like he’s come through the finish with a smile on his face. I’m so proud of him, for the owners as much as anything. He isn’t the most straightforward horse, and he’s not easy, but we’ve had him for a long time.”

Perhaps one of the most popular riders on course today was Ireland’s Jonty Evans, who was lying in 3rd place after the dressage with his Rio partner Cooley Rorkes Drift. The pair gave a masterclass in top-level cross-country riding until an unfortunate glance off 21C, the final element of the Joules corners, pushed them out of contention for a top placing.

“You needed to make a positive five strides between the two corners to make it, but I made a slight mistake – I thought I’d got the five strides dead right, but unfortunately I added a little extra one at the end and he just couldn’t get there – it wasn’t his fault,” explained Jonty. “He was absolutely fabulous. These are called three-day events for a reason: there are three days, and if we can finish with two good days and one not-so-good day then we’ll be feeling positive. He was so good today, particularly through the Mirage Pond, where he gave me the feeling that he’s not just silly brave – he’s clever, too.”

Another crowd favourite who came to grief on course was overnight leader Chris Burton, who notched up 20 penalties at fence 15, the Hildon Water Pond. The penalties marred an otherwise quality round.

“It’s really disappointing, of course,” he said, “but it’s just one of those things that happens very quickly – we just got tangled. He’s a good horse and he tries very hard, so I’m very proud of him. I think he’s got bigger things ahead of him – I’m not too worried about him.”

“When I came into the finish I was so proud, because he felt so full of himself and was showing no tiredness at all. In the last downhill, he was increasing him speed and I had to remind him to wait – there are more fences coming! He was so bold, taking it all in his stride. He loves it!” said Ingrid. “Every event rider has a dream – to ride at Badminton is something, but I’ve been to win? I’ve come second twice now, and I said to myself that I’d come back until I win it. Never give up!”

There was some confusion surrounding Ingrid’s placing after her round, as the ground jury added 11 penalties onto her 3.2 time penalties, citing a broken frangible pin. She contested this, and upon further review, the extra penalties were dropped, giving her a 0.4 penalty lead over Michael Jung.

“When I saw the penalties I thought it couldn’t be true – he’s such a sharp jumper and I hadn’t seen anything, or heard anything falling. I’m very happy; there’s a big difference when you add in those 11 penalties.”

Ingrid is feeling positive ahead of tomorrow’s final phase, in which she and Horseware Hale Bob OLD are particularly strong. “We’ve done a lot of training; now I just hope that he’ll come out tomorrow thinking about what a good jumper he is.”

Hot on Ingrid’s heels was perennial favourite Mark Todd, who cited the advantage of having two horses in the competition.

“This morning, we thought that the Hildon Pond would ride as three strides and three strides. But it’s proved all day that you really have to sit quiet and let them fiddle for the four and the four coming out. So I did that – it didn’t feel comfortable, but these horses want to jump and they want to try for you.”

Finishing on just 6.8 time penalties on his second ride of the day, NZB Campino, he now occupies both the 5th and 9th positions on the leaderboard.

“He’s a very experienced horse – even though he put me in the fence the last time he came here,” he laughed. “I was able to just cruise along with him. He’s not super quick and the amount of turns on this course doesn’t necessarily suit him, so he couldn’t have gone any faster or jumped any better – I’m delighted.”

Todd, who is outspoken in his views on the development of the sport, felt that Eric Winter’s course had, overall, been a success, although he questioned a few decisions.

“He’s got some of the distances a bit wrong – coming out of the water, it shouldn’t have been maybe one stride, maybe two. There shouldn’t be any trick distances,” he said. “Overall, though, it’s been brilliant – you’ve seen less-experienced people go round, but they’ve ridden sensibly and they’ve got their horses home, but you’ve seen other horses have a bit of trouble early on and get a bit nervous. But this is Badminton: it’s a four-star event, it’s not a three-star, and I think there are some combinations here who shouldn’t have been here. Everyone has to raise their game if they want to come to Badminton.”

The final rider of the day was Andrew Nicholson on the seventeen-year-old Nereo, who moved up to 3rd place going into the final phase despite losing several studs on course.

“He’s a big, powerful horse and when the ground is hard like that he’s prone to slipping,” he explained. “It wasn’t a big problem; it cost me perhaps one time penalty.” In a top three this close, however, that one penalty would have put him just 0.2 penalties behind the leader.

It’s been as exciting as eventing gets today, but the competition isn’t over yet – keep H&R bookmarked as we bring you live tweets from the final vet inspection tomorrow morning at 8.30am, following by live coverage and full reports from all the action as the showjumping plays out throughout the day.

THE TOP TEN AFTER CROSS-COUNTRY