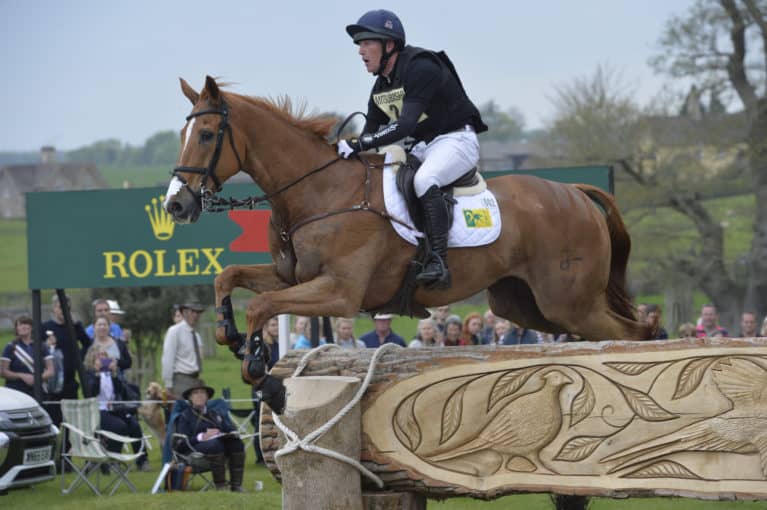 Eventing fans and supporters gathered in their masses at the King’s Head Hotel in Cirencester on Wednesday evening to join an elite panel previewing next week’s Mitsubishi Motors Badminton Horse Trials. The panel, which featured Badminton director Hugh Thomas, new course designer Eric Winter, leading showjumping trainer Ros Morgan, and top event riders Oliver Townend – himself a former winner of the event – and Andrew Nicholson – who is yet to take the Badminton title – were ably commandeered by fellow competitor and compere Jonty Evans. The panel was joined by a full house of eventing aficionados, who were offered the inside scoop on this year’s event, beginning with the hottest topic – Eric Winter’s ‘chunky’ new course.

For Eric, who has designed the three star course at Blenheim for the past 10 years, Badminton represents the pinnacle of the sport. “I’ve been walking the course for 10 years and thinking about what I would do if I had the chance to design it,” he admits. “I wanted to build a gut-feel track, rather than one that was influenced and developed by other people’s opinions. When word got out that I’d taken on the job, people were constantly approaching me and telling me what they would do and the changes they would make. I had to follow my own instincts and build the course I wanted to build.”

Keen-eyed fans may have noticed an omission in this year’s cross country course – the iconic Vicarage Vee, which returned last year after an absence, has been removed again. The decision to remove it wasn’t based on the difficulty of the fence but, rather, on some essential housekeeping: “The ground had given way on the far side, and the whole thing needed revetting. It’ll be back next year,” promises Eric. In the meantime, he hopes that this year’s course, which will reward “proper jumpers who are good in the air and riders with balance and rhythm who feel and adjust as they ride,” will provide a serious test without any catastrophes. “I want to build something that people can’t necessarily practice in the school. I want the way they read and ride the ground between fences to make a difference. I think that every course I build should influence how riders train their horses. For me, the perfect Badminton would be 50% of starters clear, with six within the optimum time and no fallers,” he explains. “But you’ll never make this sport risk-free, and I think that with the ground as it is, you won’t have those six within the time, either.” As for his Saturday plans? “I’ve booked myself a place in the disabled lavatory – you can come and check on me on Sunday!”

One rider who’s looking forward to tackling the new course is former Badminton winner Oliver Townend. “I’ve ridden a lot of Eric’s courses over the years, and I’m a fan of some of his ideas,” he says. He has three horses entered in the competition this year, but hasn’t yet announced which two he’ll ride in the competition. “They tend to make the decision themselves,” he says, “and they’ve very nearly made it!” Despite his record at the Gloucestershire competition, and his great start to the season with wins at Burnham Market and Ballindenisk, Badminton still has a special significance to Oliver. “It’s where it all starts as a kid – for me, it’s above even the Olympics. But you can’t change too much when you’re preparing for it – you have to treat it as just another event. You have to know what preparation works for your horse and stick to it.”

Olympic eventer and legend of the sport Andrew Nicholson agrees, and is pragmatic coming into his 36th trip around the Badminton course. “I’m very happy with how Nereo and Qwanza are going – but I’ve been happy before, and still not managed to win!” Qwanza is owned by Rosemary Barlow, who also owns three-time Burghley winner and now-retired Avebury. “Qwanza certainly has a big job to keep up with Avebury, but she’s a joy to ride,” he says, and then, with a wry smile – “luckily, I’m a natural with mares!”

Leading trainer Ros Morgan was successful as a Junior and Young Rider, before turning her attentions to showjumping. Now, she helps top eventers including Sam Griffiths, Jonty Evans, and Andrew Hoy master the final phase. This year, she’ll have five riders and seven horses in her charge, and her position on the sidelines offers her a unique perspective on the competition.

“The hardest part is the mix of emotions when you’re helping multiple riders. A few years ago I was coaching Sam Griffiths and Paul Tapner. Sam won, with Paul losing his lead. On the one hand, I felt this great thrill and elation for Sam – on the other hand, I felt so much empathy with Paul.” Her experience through the years has allowed her to create training plans that work for her riders as individuals. For Sam, who performs best when he can visualise a successful round that he’s ridden in the past, she told him to pretend that he was riding into the 1.30m class at Wales and West. He did, and produced the round that won him the competition. To formulate her winning plans, she keeps logs throughout each rider’s season, which can then be used to track weaknesses and counteract them.

“I’m a big fan of lists!” she laughs. “I’ll make note of every mistake a pair has made throughout the previous season, and then when we walk the showjumping at Badminton we can refer back to it. We then know where that particular pair is likely to have trouble and we can make a plan that takes that into account and minimises the risk.” But, she concedes, there are so many untrainable factors at a big event. “There might be deep mud, the horse might lose a shoe, his mouth might be sore from pulling on the cross-country the day before. I try to implement training exercises that teach the horses to solve these problems but sometimes you just have to ride the horse you’re on.”

And ride they will, when the 75 confirmed competitors begin the first phase of the competition on 4 May. How do Andrew and Oliver plan to cope with their competition nerves? That’ll be a stiff gin and tonic, please – but make it slimline; they’re athletes, after all!

The King’s Head Badminton Preview Evening was organised by, and held in aid of, Watershed RDA, which offers riding lessons and support for disabled riders around Cirencester. For more information, visit watershedrda.co.uk.

Catch the Mitsubishi Motors Badminton Horse Trials next week, and be sure to visit the Horse&Rider stand in the World of the Horse Pavilion to meet the team, win great prizes, meet some famous faces and nab the best subscription rates around.