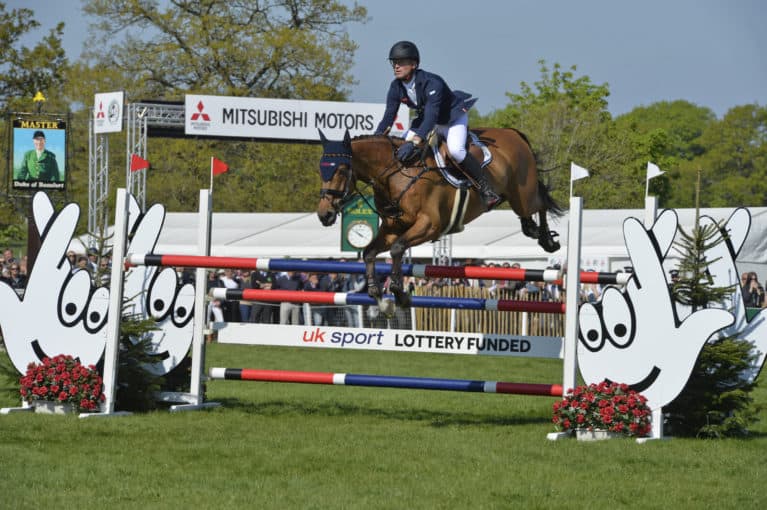 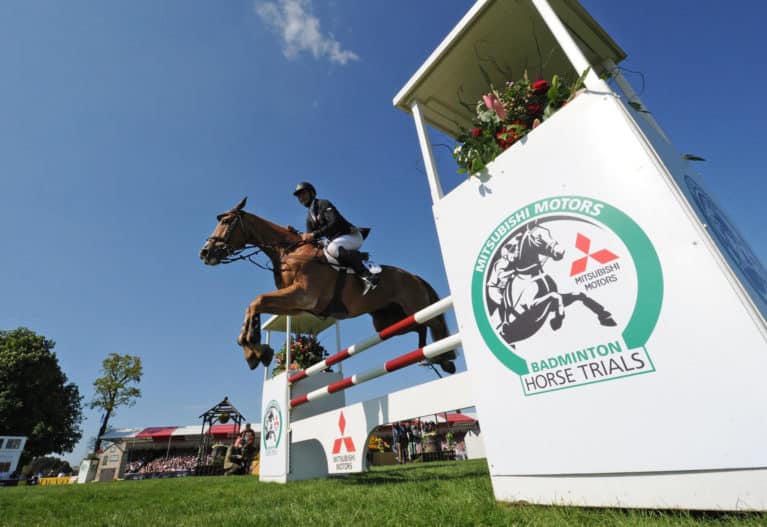 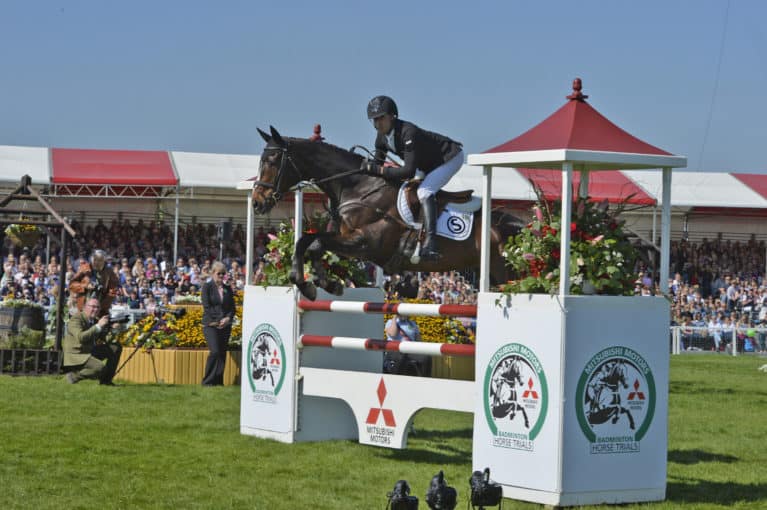 The 2017 Badminton Horse Trials has been a showcase of the ups and downs of three-day eventing, and today’s showjumping final was no exception.

With less than a penalty point between them, there was no margin for error in the top three. But if this year’s competition has proven anything, it’s that nothing can ever be taken for granted in eventing – not even impeccable prior form.

Indefatigable Kiwi Andrew Nicholson has long been a regular at Badminton, with his two rides this week giving him a record total of 37 rides around the course – but the top spot on the leaderboard has always remained elusive. He rode into the ring on his second ride of the day, the seventeen-year-old Nereo, sitting in third place, just 0.8 penalty points behind the overnight leader, Ingrid Klimke, and 0.4 behind second-placed Michael Jung. Both riders are known for their incredible consistency in the final phase, and both were expected to deliver clear rounds, with the tight time being the forecasted influence on the final placings. When Andrew laid down a fast clear, clocking up just one time penalty, the pressure was on the Germans to deliver.

But it wasn’t to be. Michael Jung and La Biosthetique Sam FBW rode into the ring as the clear favourite, but the normally undefeatable partnership had an uncharacteristic rail to put them onto 44 penalties. Ingrid Klimke had to deliver a double-clear to clinch the win. At the ringside, Andrew waited with his supporters and family, breath bated to see if she would manage it.

She would not. An unfortunate rail down led to the unravelling of her round, and she and Horseware Hale Bob OLD notched up a total of 16 penalties, pushing her to 9th place and giving Andrew the win that he’s been chasing since his debut here 33 years ago. It’s made even more special as it comes just two years after a catastrophic fall that nearly paralysed him.

“When I came second at Burghley I felt as though I’d won it, because it wasn’t that long before that I’d thought I’d never ride again,” he said. He had walked the showjumping course with Michael Jung earlier in the day. “That’s what makes this sport great – we all help each other.”

He also received help from his children, who kept a close eye on the scores throughout the competition.

“They’re very good at following the scores and letting me know what I have to do to win!” he laughed. They’re also quick to call him out for his competition superstitions: “They asked why I was wearing these particular boots – I told them that the last time I wore them at a competition, I was third after cross-country with Nereo, Michael was in the lead, and I won. They looked at me like I was telling fibs!”

So what does it feel like to finally win Badminton after coming so close so many times?

“To wait so long for it, and to be so near and not make it and to slip back down again is pretty hard, but you’ve got to keep coming back. I’m so lucky to be in that position and to have that dream, and now – it’s an unbelievable feeling.” To win aboard his long-time partner, Nereo, is even sweeter. “I’ve had him since he was four years old, and he’s always been one of my favourites. He’s had to work very hard – it hasn’t been natural for him in the dressage, and while he’s a lovely galloper he has a big stride, so the undulating ground is hard for him. But he tries to please and he gives 100% every single time. When I was recovering from my neck injury, he and Avebury were the main reasons I had a go at riding again. You’ve got to have something to motivate you. We’ve got a great team – the owners, the horses, my children – and to have Nereo in that team is unbelievable.”

Michael Jung, occupying second place, rates La Biosthetique Sam FBW as one of the best horses he’s ever ridden. “He’s a brilliant horse – he’s very strong, and healthy, and absolutely nice to ride. I’m a little unhappy about the mistake but it was, for sure, my mistake, so in the end I think we had a really great week and I’m really happy about how we feel in the cross-country. That was really unbelievable – how strong he is, even at seventeen.”

New Zealand’s Tim Price was thrilled to finish in third place aboard Xavier Faer on the horse’s Badminton debut. His quick clear, with just one time penalty, attests to the hard work put in by both horse and rider at the Sunshine Tour in Spain over the winter.

“I’ve had him for the past two and a half years, and he’s been a bit spooky and quirky, but I’ve always thought of him as a Badminton horse. He’s a fantastic galloper and jumper and that’s what he showed both yesterday and today. I was expecting him to go well across the competition, but it’s always unexpected to be sitting here at the end of it.” His stellar result here will hopefully signal the beginning of a reversal of the ill fortune that he’s suffered recently. “I feel like I’ve been a bit of a low, but this is a nice way to start the season, and now I can take that confidence through and enjoy what’s to come.”

Ros Canter finished as the best Brit in fifth place. “I never even thought I’d get to Badminton, so to finish as best Brit in my first proper attempt is just amazing. I’m so proud of the horse. It’s hard to believe in yourself until you get the results to prove it. It’s just such an exciting rollercoaster.” Gemma Tattersall followed closely behind in 7th place with Arctic Soul, who will now enjoy a brief holiday before coming back into work. Oliver Townend had four unfortunate rails to drop from 7th to 16th in what was nonetheless an incredible first Badminton result for ODT Ghareeb.

Badminton may be the biggest week of the year, but the season stops for no man, and it’ll be all systems go for the competitors as they return home to crack on with the hard work of producing a string of event horses with forthcoming three-stars and – for some – the European Championships in mind. We wish all the competitors the best of luck throughout the rest of their seasons.

5 Rosalind Canter and Allstar B (GBR)

8 Yoshiaki Oiwa and The Duke of Cavan (JPN)