My Account
Home News Burghley 2018: Kiwis cause a leaderboard shake-up on the second day of dressage

Burghley 2018: Kiwis cause a leaderboard shake-up on the second day of dressage 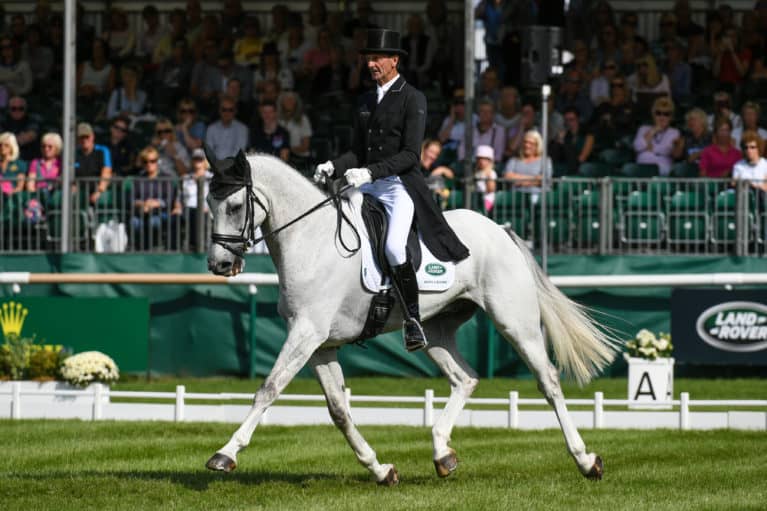 It’s well-known that Burghley isn’t a dressage competition, but that hasn’t stopped today’s riders making their mark on the leaderboard. Here’s what’s happened

After holding the top spot for the whole of yesterday with MHS King Joules, it took until the last session of the day for Oliver Townend to finally be overtaken – and it happened not once, but twice.

First to topple him was one of eventing’s most popular figures, Mark Todd. After a few navigational errors yesterday with NZB Campino, spectators were on the edge of their seats to see if ‘Toddy’ could get it right on his second attempt. Instead, they were treated to a flowing, classy test from Kiltubrid Rhapsody, who’s still very new to four-star level.

“He was very good,” enthused Mark afterwards. “Not everything went to plan in the trot work, but for where he is in training, I don’t think he could have done better.” A score of 26.4 shot them into the lead.

His compatriot, Tim Price, took to the ring not long afterwards and throw his efforts into the Kiwi campaign for Burghley domination.

“Toddy didn’t have another error of course… b****r!” was his response to the fact he fell just 0.5 penalties short of taking the lead, instead slotting into second. Ringwood Sky Boy was picked up for ‘a few quid’ as an unruly six-year-old and, although Tim spent several years trying to sell him, he now wouldn’t be without him.

Some might question why this talented bay gelding isn’t booked into a plane to the World Equestrian Games at Tryon, but Tim claims he’s a specialist Burghley horse and says he has high hopes for a good result this weekend.

While Oliver Townend may not be sitting at the top of the pile anymore, he’s still managed to have all three of his rides in the top ten. Cooley SRS went in during the first session to earn 29.4, and Oliver says that the horse is ‘the happiest he’s ever been and isn’t afraid to tell us!’. Last year’s winner, Ballaghmor Class, was the last test of the day and, while he wasn’t able to replicate the score that propelled him to the top of the Badminton dressage leader board, he was still able to do enough to slot into fifth.

Oliver will have a busy day tomorrow running all three horses, but if he’s able to keep all three on their dressage tests as he hopes, he’ll be ‘doing backflips’ – something, we’d love to see!

The leaderboard is incredibly tight going into cross-country, with just ten penalties separating tenth and 64th place. With many riders concerned about their horses tiring on the long gallop up Winners Avenue, time penalties could be what really separates the field as the sun sets on Saturday night.

Here’s the top ten after dressage…