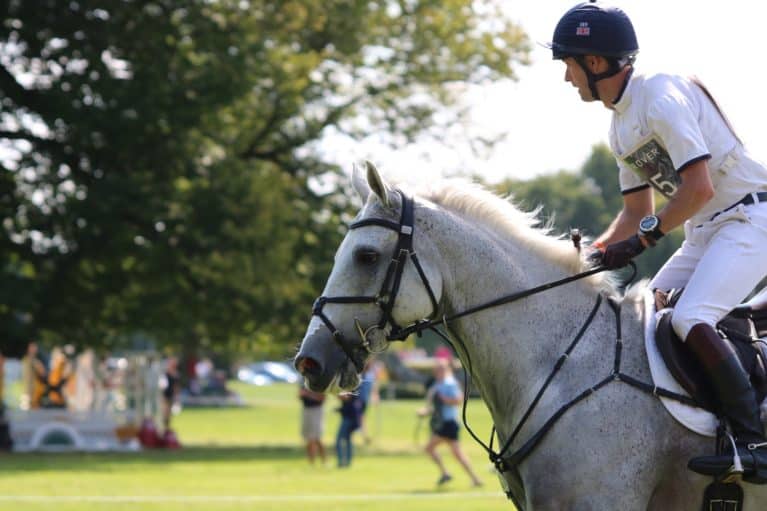 While Burghley’s cross-country course can never be described as a walk in the park, this year’s huge fences, tricky lines and tight time made it the toughest yet. Find out what happened

When asked beforehand what they thought of the Burghley’s infamous cross-country course, the first reaction from most riders was ‘it’s huge!’ In fact, Oliver Townend went as far as saying it’s the biggest, toughest track he’s ever seen. But after completing it, many were pleasantly surprised.

“I loved it,” declared Andrew Nicholson. “There aren’t any hidden traps and it’s great that you have the option to change your plans if things didn’t go right.”

Harry Meade pointed out the Trout Hatchery as a particular highlight. “I didn’t know what would happen, so I had to right on the seat of your pants – it’s not a fixed showjumping exercise hidden behind cross-country fences.”

In the end, though, it was the time allowance of 11 minutes and 11 seconds that proved to be incredibly influential. “I didn’t think anybody would make it,” the long-standing course builder said in the end-of-day press conference. “When Oliver Townend’s first horse didn’t get it, when Toddy’s first horse didn’t get it, I thought this might be the first Burghley on good footing where nobody gets the time.”

The first rider to come close was Piggy French, who was runner up here last year with her ride Vanir Kamira. Doing their bit for girl power, this formidable duo sailed home just three second over. “She’s a fabulous little mare,” enthused Piggy afterwards. “You could strap a monkey to her and she’d jump the fences.” That assessment, however, seriously undersells the talented rider in the irons, and Piggy admits she does have to regularly balance ‘Tilly’ to keep her off her head and back in balance.

With so many horses coming home tired and over the time, Vanir Kamira was still full of running as she crossed the line. “I’m kicking myself for those three seconds when she finished so well,” said Piggy. However, it was enough to push them up to third place.

Not far behind them, though, was Harry Meade and Away Cruising, who added just 1.6 time penalties to their dressage score. This is the grey gelding’s second trip to Burghley and Harry is delighted with his performance. He admits to riding conservatively, as he didn’t think the horse would go as well as he did, and was surprised to find he stayed on his markers without slipping back in the latter stages of the course. He finished on the same score as Piggy but, as she was closer to the optimum time, slots in behind her into fourth.

In wasn’t until well into the afternoon when the time was finally beaten, and it came at the hands of Tina Cook and Star Witness. After a disappointing dressage the day before – a phase which is never this horse’s strong suit – Tina knew the only way she’d be able to get near the top ten was to go clear inside the time.

“I had to push him, he’s not a typical Thoroughbred and I knew I wouldn’t be able to make up the time in the latter stages,” she said afterwards. “He came up with the goods and cruised home, but I think he only had another 30 seconds of running left in him. He knows Burghley well and loves it here.”

The King of Burghley, five-time winner Andrew Nicholson, once again proved himself worthy of his crown – both his rides finished inside the top ten. First out was Jet Set IV – while spectators would say it was a smooth round that made the course look easy, Andrew claimed it was a bit more ragged than he’d expected. “He pulled hard and was unsettled by the crowds, but he’s got plenty of pace, he’s brave and he’s naïve. He’s a class horse for the future,” was his assessment.

His second ride, four-star debutant Swallow Springs, is apparently the chalk to Jet Set IV’s cheese. While Andrew claims his stablemate can jump higher, Swallow Springs is the galloper of the pair. This was reflected in a clear round inside the time. “He’s a proper one,” grinned Andrew. “Jet Set IV is more genuine, but Swallow Springs has class. He might be young, but I rode him like he’s a four-star professional.”

Somebody else who was channeling their inner four-star professional – although some might argue that he’s already that in his own right – was Ballaghmor Class. “He felt like Avebury (Andrew’s three-time, back-to-back Burghley winner) out there,” said Oliver Townend after they pulled off the fastest, and final, round of the day. “It’s unbelievable! I didn’t think he’d have the speed, as it’s not in his pedigree, but it’s clearly in his mind.”

Although he claims his round with Ballaghmor Class was his favourite of the day, Oliver can’t be too disappointed with the two that preceded it. All three horses sit within the top 13 after pulling off fast clear rounds, although MHS King Joules (10th) and Cooley SRS (13th) did earn some time penalties.

“Nailed it!” was Tim Price’s reaction when he brought Ringwood Sky Boy home just one second over the optimum time to take the lead after cross-country. “This place is an old friend, he’s an old friend. I know how to ride him and he knows himself under duress, it was just a nice day at the office. The time was in the background – you’ve got to focus on your horse – but I knew if I wanted to preserve my place, I had to take every line, every corner.”

Tim had learned a lot of those lines from his earlier round on Bango, which was a lesson in flowing, economical cross-country riding. “The plan was to be a bit nippier, but it’s a tricky course that keeps you thinking, not galloping. It’s nice to be sat on something so scopey – he’s not been out for a year because he’s been brought back slowly from an injury, but he’s a true Burghley horse. I’m so happy.”

Ringwood Sky Boy’s round leaves Tim at the top of the pack going into the showjumping, but without even a fence in hand over those snapping at his heels – exactly the same position as his wife, Jonelle, was in at Badminton in the spring. Tim will be hoping to replicate her success and add his own silverware to the family trophy cabinet for this season, so he’ll need to bring his A game tomorrow.

As all three of the leading riders were quick to point out in the press conference, eventing is a sport that needs to be taken one day at a time. Just one fence separates the top four riders, so clear rounds will be essential tomorrow if they want to put in a bid for the Burghley trophy.

Here’s the top ten after cross-country…