My Account
Home News Catching up with the Dengie Ambassadors

Catching up with the Dengie Ambassadors 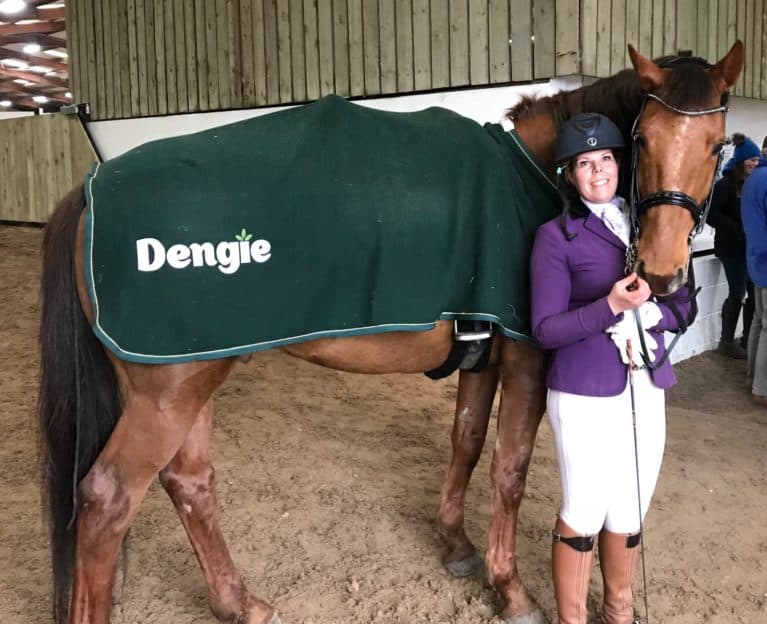 Competition success and a Dengie visit

Taz is looking and feeling super on his Dengie diet, and we’ve been making the most of it since our last blog.

We’ve been out competing on the team for Three Valleys Riding Club, coming 2nd in the Medium. This means we’re now qualified for the Riding Club Championships at this level, which is very exciting.

We’re also qualified for the Area Festivals at Elementary and Medium, and we only need a few more points towards regional qualification. This included trips to Richmond Equestrian Centre and Northallerton Equestrian Centre, where we won our Medium test. Taz is feeling super, and getting better and better.

Claire Akers and Jo Harrow from Dengie visited us with the weighbridge to check how Taz is getting on with his Dengie diet. They both said he looked super and it turned out he’d lost 2kg since his last weigh-in. Claire, Dengie’sPerformance Horse Nutritionist, recommended a change to his Hi-Fi ration and suggested increasing the amount of Performance+ balancer he’s fed to help support him in his hard work.

One of my other horses, three-year-old Leckie, also had a weigh-in because he’s fed on Dengie products, too. As a young horse, it’s super-important to me that he’s nutritionally supported from an early age. His balancer ration had a slight adjustment, too, but that was all. They’re both very happy ponies and I’m very lucky to be supported by such a super team.

Our next adventures are the Riding Club Championships, Area Festivals and regionals, so wish us luck! Charlie and I have made some big changes since our last blog. As I briefly mentioned then, we had moved to a new yard, which is both fantastic and sad. For the past 10 years I’ve been lucky enough to keep my horses at home and Charlie had become quite accustomed to hanging over our neighbour’s fence and asking for treats. I think both Charlie and our lovely neighbour are really missing each other.

The flip side of this, though, is that we have an arena… with floodlights! This means riding after work is no longer a challenge. Charlie and I have spent the last two months focussing on flatwork, and poles, poles and more poles. The work is paying off, though, and the difference is really starting to show – he looks and feels much stronger.

I have also, after much consideration, taken his shoes off for good. Throughout the winters he’s become a chronic shoe-puller and my farrier was coming out nearly every week to replace a lost shoe. After Charlie pulled three off in a day, I had had enough. Fortunately, his Dengie diet is barefoot friendly and, as well as having a really shiny coat, he also has lovely, strong feet, so he’s definitely getting all the right stuff.

We’re introducing jumping again, too, starting small, and will hopefully be out competing again soon. I’ve got my eye on a few competitions coming up soon, so wish me luck and watch this space! So, our competition prep for the Petplan Championships in April isn’t going quite to plan!

I managed to have a few dressage training sessions in January and February, then got to our first show of the year.  As we hadn’t been to a show for a few months, I decided just to do the one class. Sherbert took it all in his stride and behaved brilliantly – even though we didn’t get in the top placings, I was very pleased with how he went. I’ve been working on getting Sherb to carry himself more and not lean on me, which is going well but there’s lots more to work on

Then, the Beast form the East struck! It’s very rare for Cornwall to get snow, but when we do, everything seems to come to a standstill. Someone also crashed into my car, so I had no towing vehicle for a couple of weeks, which unfortunately put a halt to training and shows.

With the evenings very gradually getting lighter, I’ve managed to fit in a couple of short hacks after work this week and I’m really looking forward to lighter evenings and, hopefully, some dry weather!

Being fuelled by fibre really suits Sherbert and his temperament, and he’s looking and feeling great on his Dengie diet.