When Brooke partner AHTCS (Animal Health Training and Consultancy Service) set off on a survey of welfare standards at one of the brick kilns in Nepal's Kathmandu valley, they didn't expect to find nearly 40 animals in a desperate state. 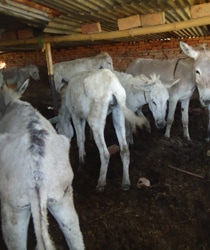 Of the 39 animals discovered at the off-season kiln, 17 were dead at the scene and the remaining 22 were in a terrible state.

The feed and hay mangers were empty, there was no water, and fresh faeces had signs of internal parasites.

The extent of neglect was such that 4 of the animals were unable to stand on their own. The team promptly started treating and caring for the animals as well as cleaning out the stables.

The next task was to find the owner of the kiln to see why the animals had been left in such appalling conditions.

Typically brick kilns only operate in the dry season and shut down during the rains. Most animals return with their owners to their original homes but the cost of transportation is high – as much as £14 each.

The owner told the team remorsefully that he was in a financial crisis and because of that he was unable to take his animals with him or even provide enough money to feed them.

In this case, he left them with two carers who did not have the means or incentive to care for them as they themselves had financial problems.

But thanks to the Brooke, the animals are now being provided with enough food, clean drinking water, and medical care for over a month, until the season starts again and the horses, ponies and donkeys can be seen to.