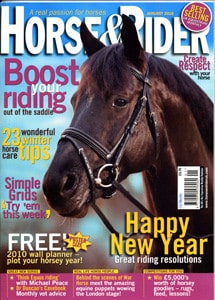 Horse&Rider Magazine has been voted ‘Consumer Magazine of the Year’ at the 2010 Independent Publisher Awards, at a glitzy ceremony at London’s Vinopolis on Tuesday 7 December, 2010.

Fighting off stiff competition from other shortlisted consumer titles, including Food & Travel and Spear’s, Horse&Rider proved victorious in the most anticipated category of the awards. Although Horse&Rider was shortlisted for the same award in 2009, this is the first year in which the UK’s best-selling equestrian monthly has won the title.

Said Nicky Moffatt, H&R’s Editor: “The whole team at Horse&Rider is thrilled to have fought off strong competition to win the 2010 Consumer Magazine of the Year award. This is a fantastic representation of all the hard work carried out by our brilliant team.”

More information and photos from the awards