There can be few sporting events that provide the spectacle, excitement and allure of the Grand National. 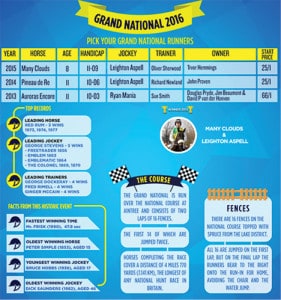 Watched by over 500 million people worldwide and with prize money of over £1 million to be won, the National is the career-defining focus for the world’s premier jockeys, trainers and horses: the jewel at the centrepiece of the British racing calendar. The true magic of the Grand National, however, lies in its mass appeal, as people from all walks of life, many of whom do not watch racing at any other time of the year, come together to delight in the buzz of the “Big One”. This is so much more than a race!

The World’s Most Celebrated Race

First held in 1839, the Grand National is widely regarded as the ultimate test of stamina, perseverance and strength, with a 40-strong field aiming to complete 30 tough jumps over a distance of four miles. Many of these jumps, such as the notorious 6ft9 drop of Becher’s Brook and the almost 90 degree Canal Turn, have become almost as famous as the race itself, having clocked up their fair share of pile ups and falls over the years. The difficulty of the course, combined with huge prize money and the participation of the cream of the horse racing elite, have all made the Grand National an event where dreams are made and legends are born. Ever since the iconic Red Rum became the only horse in history to win three Grand Nationals during the 1970s, spectators the world over have been captivated.

This year’s festival kicks off on Thursday 7th April, as Aintree Racecourse plays host to a breathtaking three-day horse-racing extravaganza.

For a current list of the runners and riders, click here for 2016 Grand National betting odds courtesy of William Hill online. The site also includes early betting prices and all the information you could ever need to know about this year’s Crabbie’s Grand National Festival.

The glamour of Ladies’ Day (8th April) and a host of top-quality, high-octane races such as the Topham Steeple Chase and the Sefton Novices Hurdle will all set the stage for the Grand National itself, which takes place on Saturday 9th April at the new time of 17:15. The 2016 race promises to be a thrilling affair, with some of the premier UK and Irish horses battling it out over the tough Aintree course to finish the jump racing season on a high.

Last year’s victor, Leighton Aspell, who won with outsider odds of 25-1 on the Irish-bred Many Clouds, will be hoping to repeat his success, however, the 2016 field also includes a clutch of strong contenders, who will hope to emerge triumphant on the big day.

The Ones to Watch…

Many Clouds is still in fine form, despite his last race at Kelso being abandoned due to a waterlogged track. Having given a host of other top thoroughbreds, such as Don Poli and Smad Place, tough races recently, the 2015 winner still looks to be the one to beat and you can see all the odds here – bit.ly/Grand-National-2016.

It certainly won’t be a walkover, though. Kruzhlinin is also a horse on top of his game, having romped to victory at Kempton in January this year, as is Shutthefrontdoor, who finished 5th in last year’s Grand National and The Last Samuri, a sprightly eight-year-old who has recently won at Doncaster. And with last year’s runner up Saint Are determined to go one better this time around also in the mix, this year’s Grand National is shaping up to be one of the most thrilling in recent years!