My Account
Home News Leaving a Legacy: Recordbreakers at Badminton

Leaving a Legacy: Recordbreakers at Badminton 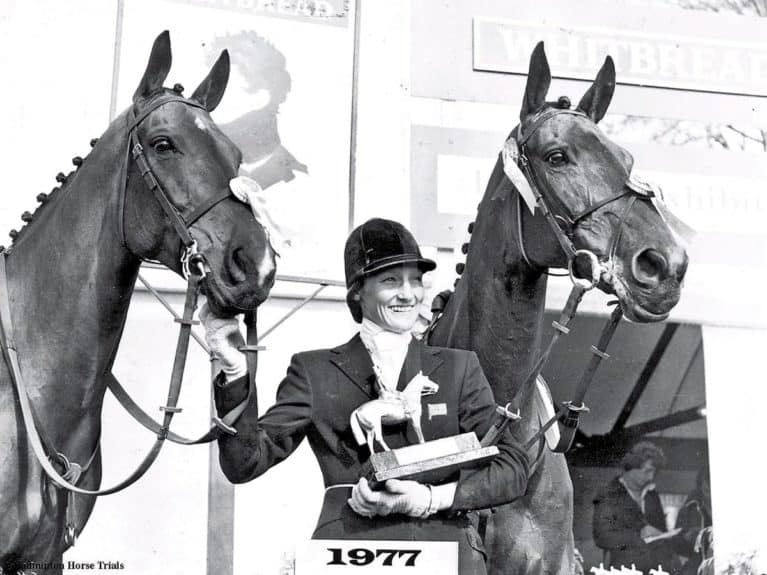 The Youngest (Human) Winner: 1969 winner Richard Walker can rest assured that his record will never be beaten – these days, much stricter qualification trajectories mean that few riders under the age of 20 make it to this level. But Richard was a mere 18 years old when he lifted the trophy, having scuppered his competition aboard his 15.1hh Pony Club mount Pasha.

“I was probably like a 17-year-old Boris Becker at Wimbledon,” he said last year, the fiftieth anniversary of his win. “It’s not until you’ve got a bit more experience that you know enough to be concerned!”

The Youngest (Equine) Winner: Golden Willow, ridden by John Shedden, boasts a double legacy at Badminton – he wasn’t just the youngest-ever winner, at a mere five years old, he was also the first winner. He took the title in 1949 when the event – and the idea of tough qualifications – were both in their most embryonic stages.

Although Thoroughbreds remain popular in eventing, and many riders profess their allegiance to ex-racehorses, Golden Willow’s career trajectory went the other way round – he began as an eventer, won Badminton, and as a six-year-old, began a rather misguided and ultimately ruinous career as a racehorse. Though Shedden advised against it, certain that the horse’s hot-headedness and tendency to bolt would be ill-suited to life on the track, Golden Willow’s owner felt that the prize money her horse was earning as an eventer was insufficient in comparison with his accomplishments. Unfortunately, Shedden was proven right – Golden Willow’s career would end as it had scarcely begun after bolting in training and suffering a catastrophic tendon injury.

The Oldest (Human) Winner: When Mark Todd retired from the sport of eventing in 2000, he did so having accomplished more than most riders can even dream of – he’d competed at five Olympics, winning back-to-back individual gold medals and even competing in two disciplines at Seoul in 1988. He’d won Badminton three times – including on his first attempt in 1980, a rare feat that hadn’t been managed since Richard Walker in 1969, and has only been done once since, by fellow Kiwi Jock Paget in 2013. Todd had also won Burghley five times and been named the FEI Rider of the Century. It was to be a retirement well earned.

Except, of course, for the fact that there was no keeping the affable rider away from the sport he loved. After a challenge from a friend at a party, he reappeared several years later to take a crack at the 2008 Olympics. After that, he decided to stay on for over a decade longer, and in 2011, he won his fourth Badminton, age 55. He retired again in 2019, and assures us he won’t be back again.

The Oldest (Equine) Winner: Until 2017, Mark Todd could also claim a snippet of glory in this category – it was his Horton Point, who won at the age of 16 in 1994, who topped the equine age stakes. But Andrew Nicholson’s Nereo changed all that, winning at the ripe old age of 17 and retiring the following year. It was certainly a vintage year for vintage horses – Michael Jung’s La Biosthetique Sam FBW, who finished second, was also 17.

The Smallest Winner: Two overgrown ponies share the distinction of being the smallest to win Badminton – and there’s every chance they shared a dodgy measuring stick, too.

Our Solo took the title in 1960 with Australia’s Bill Roycroft up. The diminutive stock horse, who scarcely made 15hh, had been bred for pony racing – a lucrative industry in 60s Australia. When he tiptoed over the maximum height allowed, however, he was sold to drive cattle from town to town and broken to drive, too. As was the norm in those days, he would free-range around town with a long rope around his neck, foraging for grass under garden fences.

As a nine year old, Our Solo was bought by Bill for a pittance and played polocrosse with a friend for a while before Bill, who stood at 6’2 and thought he’d be much too tall for the little horse, began to jump him. Because horses carried weights while eventing in those days, Bill worried that the 11 stone 11 burden would be too much on Badminton’s long roads and tracks phase – and so their win came after he opted to hop off and run alongside his horse in this pivotal section. That year he also helped the Australian team to a gold medal at the Rome Olympics before retiring back to his formative career as a stock horse.

In 1968, history would repeat itself when Our Nobby, who only measured 15hh by way of a bribe to the vet, took the win with Jane Holderness-Roddam (neé Bullen) in the irons. 20-year-old Jane – dubbed ‘The Galloping Nurse’ – took four days off from her work in Middlesex Hospital to tackle what was just her third three-day event with Nobby. Curiously, it was Bill Roycroft who taught her how to school through water, as she explained to Country Life:

“Bill taught me how to get my horse, Our Nobby, to jump into water by galloping him over a line of cavaletti first. At my first Badminton, in 1967, I was green with fright and my older brother Mike [Bullen] teased ‘You’ll never get that lop-eared creature round’, which made me kick on in determination. I might have failed my nursing exams that month, but at least I’d got round Badminton.”

The Tallest Winner: Four horses hold the honour of being the tallest to win Badminton, but they aren’t, perhaps, as colossal as you may imagine. Major E. A. Boylan’s Durlas Eile, who won in 1965, Captain Mark Phillip’s Columbus, who won in 1974, David O’Connor’s Custom Made, who won in 1997 and Chris Bartle’s Word Perfect II, who won in 1998 were all 17hh.

It’s rare to see horses much bigger than this competing at the top level – eventing requires a high degree of adjustability, and many riders prefer to ride smaller, catlike horses. Of course, there’s one notable modern exception – Alex Bragg’s fan favourite Zagreb tops out at nearly 18hh, and with four top five results at the level, the 16-year-old gelding is waiting in the wings to try to make this record his own.

The Most Wins: There’s just one queen of Badminton, and she might well be named the queen of eventing. Lucinda Green was just 19 years old when she won the first of her six titles at the Gloucestershire event, each earned on a different horse. That first one came aboard her Pony Club horse Be Fair, who was the accidental result of a hopped fence and an illicit liaison, and who Lucinda drove to the competition in a tiny horsebox converted from an old ice-cream van.

In 1976 she won her second Badminton, this time aboard Wideawake, but the victory was marred by tragedy – as she waited to begin her lap of honour, the ostensibly healthy horse reared up suddenly beneath her, staggered forward, and died. The cause was never discovered.

Lucinda’s 1977 victory nearly didn’t happen – she nearly turned down George, her mount, because of his topsy-turvy competition record. But her father, who was in the terminal stages of a cancer diagnosis, encouraged her to take the horse on and give herself a focal point. He would join them in person at that Badminton, where he took on the role of leading George around in the ten-minute box, and sadly passed away in the months after their win.

When she took her fourth win in 1979, Lucinda assumed that she’d never be so lucky as to win again, and she wrote a book called Four Square commemorating her extraordinary string of victories and the horses who had helped her to them, including unlikely champion Killaire. She was, of course, totally wrong.

It took four years, but in 1983 she topped the leaderboard again, this time with Regal Realm.

“He had an incredible jump, but did everything with his head in the air – he was so ewe-necked that when he galloped along his ears were in your mouth,” she said of the horse.

Her sixth and final win came with part-bred Welsh pony Beagle Bay in 1984. Now, Lucinda can reliably be found at most events, either competing her own horse, helping her daughter, Lissa, who made her Badminton debut in 2017, or working as a busy member of the media army.

The Most Completions: His horse holds one record, and now Andrew Nicholson takes the final slot on our roster. The intimidatingly talented Kiwi has five Burghley wins, a Kentucky win, a Pau win and a shelf full of medals to his name but incredibly, a Badminton victory eluded him until 2017, when he won with Nereo on his 37th attempt, just eighteen months after a crashing fall that nearly ended his career. Note that that’s 37 completions – the number of starts that Andrew’s had since his debut at the event in 1984 is even higher. We’re tired just thinking about it.

Best Dressage Score: Australia’s Andrew Hoy and mount Darien Powers looked unassailable when they posted a 30.8 in 2000 – a 20.5 in today’s scoring. But in 2019, Oliver Townend smashed that record to pieces when scoring a 19.7 aboard Cillnabradden Evo, and also became the first person ever to sit first and second after dressage. Even more impressively? His flatwork prowess comes, in large part, from studying DVDs of the greats in action.
“Normally I’m struggling away with a set of mirrors and the floodlights on, but that’s just what we do,” he explained with a wry laugh. “I don’t actually have a dressage trainer, embarrassingly – I have the set of mirrors, and I have some DVDs, so you could say I’m pretty close with Carl Hester.”