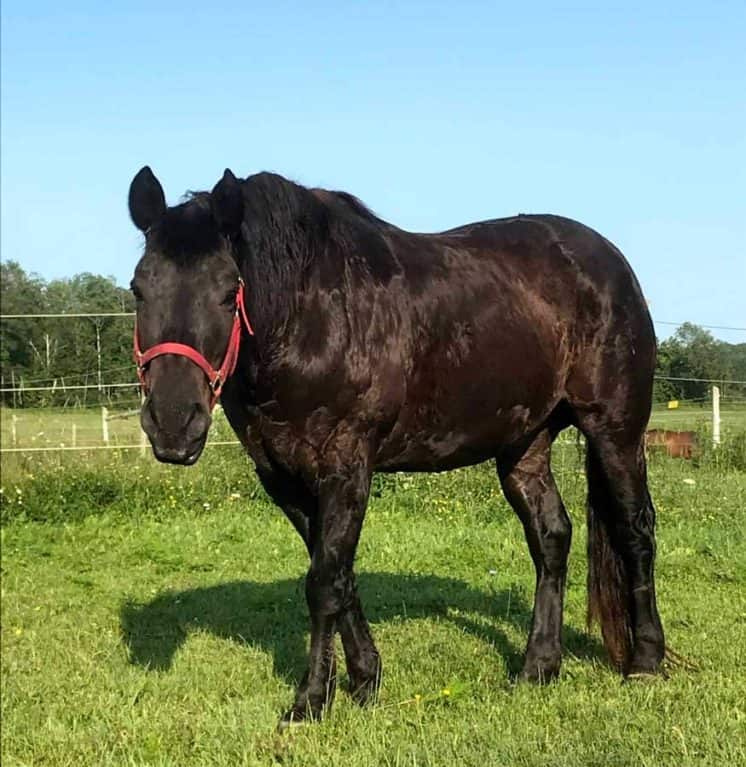 When 18-year-old Libby arrived at the Canadian Horse Rescue and Re-Homing Society, Andrea White had no idea what condition she’d be in, but the last thing she was expecting was a diagnosis of laminitis

Libby is an 18-year-old registered Canadian Horse in Ontario, Canada, who was entrusted to the care of Karli and Andrea White at the Canadian Horse Rescue and Rehoming Society (CHRRS) to find her a new home. They had no knowledge of what condition Libby was in, other than a picture of her in a field with a pasture mate – she didn’t look to be in terrible condition, so finding her an adoptive home would have been easy.

However, when Libby stepped off the trailer after a three-hour ride from the only home she likely had ever known, there was a feeling of shock and heartbreak seeing her condition. Her coat was long (it was 16 June, and her winter coat should’ve been long gone), her feet were overgrown and cracked.  She was experiencing a lot of pain in her feet but her personality shone through and Andrea and Karli adopted her anyway. Andrea and Karli’s first step was to fix Libby’s nutrition. “We got Libby on a probiotic immediately and some low non-structural carbohydrate (NSC) supplements. At the time we didn’t realise how important this was for her, it’s just a normal thing we do with our horses,” Andrea recalls.

The second step was to take off address Libby’s hooves. “This was done in two sessions,” Andrea says. “Since Libby had obviously not seen a farrier in a very long time, it took well over an hour to get her trimmed up properly. Two trims and we were heading in the right direction – or so we thought.”

Libby was vaccinated, had her teeth attended to and her blood work was done, which diagnosed Cushings and insulin resistance (IR). But she was still very sore, so it was time for X-rays to investigate further.

Andrea continues: “Libby had X-rays that would break your heart – X-rays that in former times would’ve been a death sentence. I knew by the look on my vet’s face that this would be a long shot in saving her life. We had to try though, we owed it to her, and Karli and I weren’t going to give up without trying. So, we began our journey with laminitis.” Libby was placed in casts in August and Andrea was told to keep her in a stable with deep bedding and as little movement as possible. Her legs and hooves were iced with ice boots twice a day and with ice gels in between – four times a day she had something cold on her feet, to help alleviate the pain.  However, it was clear that the casting wasn’t comfortable.

Libby stayed in her stall 24 hours a day for the first four weeks until she started showing that she could move better. Andrea continues: “As soon as we could, we allowed her to wander the barn while her stall was cleaned and then back in again until the next day. Another four weeks went by and then she was casted again, which meant another four weeks of discomfort. She was lying down for hours, just to take the weight off her feet. But again, she slowly started to move a little better so we could start to let her out and about.

“My heart was breaking, but I wasn’t prepared to give up. Throughout this time, I learned a lot about laminitis – how to help manage it and aid recovery. What I found was that what works for one horse does not work for them all. Libby was no different and we had to take our cues from her.” “I knew that traditional shoes weren’t going to work for her. There was too much separation and the way Libby handled a trim indicated that she wouldn’t do well being shod. My daughter and I looked at many other possible approaches and that’s when we came across FormaHoof. It would give her the support she needed and the comfort she wasn’t getting from casting. Don’t get me wrong, casting did what it was supposed to do, returning her coffin bone to a more regular angle. Casting started her on the road to recovery, giving hoof wall support while the new, healthy hoof grew in. However, had I known about FormaHoof, earlier, I would have considered that route first.”

After two rounds of casting, it was time to Andrea to consider her options – among them., FormaHoof. After with her vet and farrier, the starter kit was purchased with the plan to do X-rays again and, on approval from the professionals, remove the casts and apply the FormaHoof. “What I saw on the X-rays was a significant improvement, even though I’m not versed in reading them,” Andrea explains. “After five months, I could see in front of me the results of putting her through what we did. Her back feet were good enough that they didn’t require any further casting at all.

“We put Libby in FormaHoof after the casts came off. After a trim and more X-rays, I have to say, I felt joy seeing her walk around the next day. It wasn’t perfect, as she was once again adjusting to new angles and learning to adapt, but after many years of neglect I felt we’d made significant progress.  Her pain medication requirement dropped significantly. We let her out almost immediately to walk around the barn and it wasn’t long before we took her outside and let her enjoy the outdoors, even just for a short while. She rolled, probably for the first time in months. She seemed so happy and thoroughly enjoyed walking around and stretching her legs.”

Light at the end of the tunnel

“The second application went much smoother than the first as we had a better handle on the process and the excess hoof that been trimmed away meant her feet were smaller and better fitted the moulds,” Andrea continues. After two applications, Libby was allowed to go barefoot and finish growing out her hooves. With the stretched laminae gradually reducing, a four-week farriery schedule was implemented to keep her comfortable. “She’s out for the day now and only comes in at night with the rest of our herd,” finishes Andrea. “I’m looking forward to the day that we can find out what she knows and hopefully she can be an ambassador for the Canadian Horse Breed and FormaHoof!

“If I ever have to travel the laminitis road again, I wouldn’t hesitate to put the horse in FormaHoof. It’ll be my go-to from here on out.”