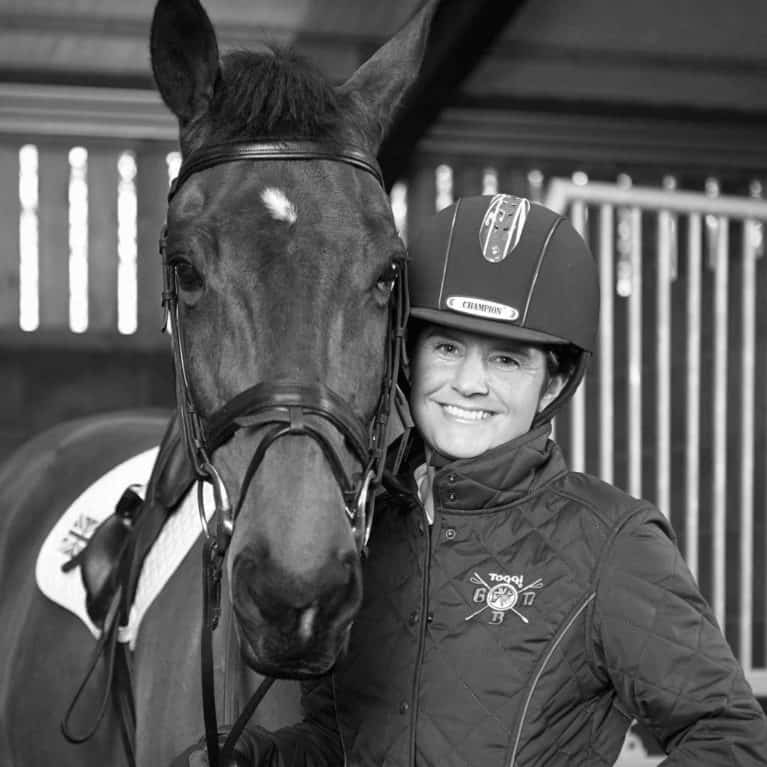 I’ve ridden for as long as I can remember and my first pony was called Sunny, but was also fondly known as Bunions! He was 12.2hh, grey and fluffy, and we did all Pony Club activities together. We were lucky to have him in our family for six years. I didn’t really take up eventing until I was 15, despite being a self-confessed eventing geek. I would wander around all the big events with my camera and I was completely in awe of Mary King – I found it very weird when I started competing against her.

I first had the honour of wearing the Union Jack in 2001 at the Young Rider European Championships in Belgium. It was a very proud moment for me. Eight years later, I went to my first senior European championships in France. I was called up at the last minute with my ride Some Day Soon and wasn’t expecting to win a medal, but I won silver! Of all the horses I’ve ridden, I’m most proud of Jakata. We bought him thinking that he was a nice horse, but never expected him to be as good as he was – together we competed successfully at four-star level.

I was selected for the British team competing at the London 2012 Olympics with two horses, Jakata and DHI Topper W. I won the test event at Greenwich with Topper on our dressage score of 34.7, more than 10 points ahead of Pippa, who finished second. This made everything so much more real and exciting so I was absolutely devastated when I had to withdraw both of my top horses in quick succession due to injuries. My dreams were shattered and missing out on competing at London 2012 was a big disappointment – I’m not sure I’m over it, even now! The best piece of horsey advice I have ever received was from dressage rider and trainer, Ian Woodhead. He told me to ‘Sit down on your bum and make it happen!’ and I will never forget it in my training or in competition. Before the cross-country phase at an event, I like to watch a rider that I really respect go round, so that I can see how the course rides. But I also think that ultimately, if you don’t have confidence in yourself and your horse, then you shouldn’t be there.

Eventing is what really makes me tick. I love it because I don’t have a least favourite discipline. Each of my horses has elements that they’re stronger in and phases they prefer, and that’s what makes each phase enjoyable. If I wasn’t an eventer, I have absolutely no idea what I’d do. This is what I’ve always loved and I don’t think I could do anything else.

His brain is the most important thing when I’m looking for a new horse. He doesn’t need to be fantastically talented in any particular phase to excel in eventing, but he must be trainable. With the changes to the sport in the last decade, there are more warmblood horses competing, but you still need a light, balanced, athletic horse with a good brain to make a successful eventer.