Friday 17th February 2012 saw the legendary Monty Roberts and his protégée, Intelligent Horsemanship founder, Kelly Marks put on a much-anticipated demonstration at Royal Leisure, Henfield. Monty, who lives in California, is 77 this year so his transatlantic trips are likely to become an increasingly rare treat for the British public. 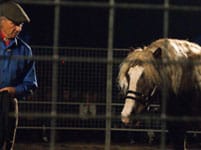 Over 1200 people crammed into the arena to witness the original ‘horse whisperer’ in action. The buzz of anticipation was heightened dramatically when 10 minutes before the great man was due to start we were plunged into total darkness due to a power failure in the local area. Kelly’s Intelligent Horsemanship team dealt with the situation fantastically well, generators were found and flood lights positioned so that the show could begin just 20 minutes later than scheduled.

“You are about to see something no crowd has ever seen before.” Monty told us as the first half of the show began in semi-darkness. In fact, the poor light only served to heighten the experience of watching Monty at work.

With the audience shrouded in gloom and relatively indistinguishable, it felt as though you were peeking in on a private conversation between Monty and each of the two horses he worked with in the round pen. It was like watching someone when they don’t know that you’re there, as Monty chatted seemingly to himself and the horse about everything and nothing.

Monty’s image and voice is all part of his magic. He dresses like a cowboy in his Sunday best, in beige jeans with a royal blue shirt, topped off with a farmer’s flat cap and a tan leather jacket. His voice is like liquid chocolate with a soft Californian lilt, if he read audio books I’d buy them all. Back problems have made his stance slightly stiff and awkward, and as he moves about the pen urging the horse away from him it is apparent that his hard life has taken its toll. He is charming, endearing and has such an easy way about him that you forget it’s not just you and him having a chat over coffee rather than a sold out show.

Monty’s techniques of join-up and the way he communicates with horses through his body language are now widely practiced and accepted training methods throughout the world, though this wasn’t always the case.

The equestrian community is one steeped in traditions that are often difficult to break away from. New ideas and methods are often frowned upon and viewed with suspicion. ‘I had threats on my life in the early days,’ Monty told H&R. ‘A number of times I have had to be air-lifted to safety.’ Watching him now it is clear just how popular Monty and his language of ‘Equus’ has become.

I was fortunate enough to meet one of Monty’s most loyal fans as we got settled before the show. Rosemary Rodway and her son Andrew have been coming to Monty and Kelly’s UK shows for 13 years. Rosemary is 80 years old and confined to a wheelchair but her love of Monty, Kelly and their horses keeps her coming to the shows. “I have never had a horse or even learned to ride, I just feel a real connection with them – I just love horses,” Rosemary told H&R. Both Monty and Kelly greet Rosemary by name and stop to chat with her as they set up. “During one of her shows last year, Kelly rode over to me on her horse and gave me a bunch of flowers. It was a wonderful moment.”