Over 100 Horses Rescued from Meat Farm in Amersham

A nation of animal lovers watched in horror as over 100 horses, ponies and donkeys were rescued. Mel Rutherford follows the equines' first steps on the road to recovery 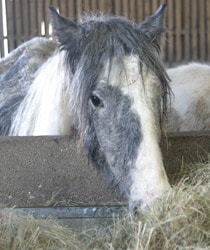 Tiny Nora stamps her donkey-foal hooves and nudges impatiently at her mother’s side. A dutiful mum, Lola stands for her nursing baby who, once satisfied, totters over to where I’m crouching nearby, sniffing at my outstretched hand.

Mum immediately moves closer – albeit more tentatively than her six-month-old foal – to steer her away. And who can blame her? Lola has every right to be wary. Food, water and care are not things she associates with humans.

It has only been a short while since the headlines were swept with harrowing images of the emaciated equines found in Amersham. Difficult scenes for anyone who loves animals to witness. Looking at 14 of the most critical cases, it’s even harder to see how anyone could neglect these lovely – and surprisingly forgiving – animals.

Just as the rest of the nation was shocked and saddened at the widely-publicised Spindles Farm rescue in January this year, everyone at Horse&Rider was in disbelief at how anyone could treat one animal, never mind 131, with such indifference.

“We’d love you to come and see the ponies!” enthused Susan Lewis, Marketing Manager at the Horse Trust, shortly after. So, on a frosty morning at the end of January, after donning several jumpers and numerous pairs of socks, I soon found myself in Buckinghamshire, on the long, winding driveway to the Horse Trust.

When the RSPCA realised the extent of the difficulties they were faced with at Spindles Farm, the nearby Horse Trust was the first port of call. “The RSPCA asked if we could set up some sort of emergency quarantine and take some horses in straightaway,” explains Susan, preparing me with a cup of coffee and a warm welcome.

And how are the new residents? Expecting bad news, I had armed myself with enough tissues to soak up a flood. “They’re eating for Britain!” Susan reassures me. So the Kleenex stayed in the office as, relieved, I went to meet the ponies who had so captured the hearts of the nation.

It was a rain-soaked Friday evening when an unexpected call came through to the Horse Trust from the RSPCA. “It all happened very quickly after that,” Head Groom, Charli Pardon remembers, still a bit shocked.

“When we got the horses off the lorry, they couldn’t even manage the step to the stable – you had to push them up. A couple just collapsed once inside.”

So I’m not sure what to expect as I approach the barn housing the rescued equines. But before I even get a chance to step into the foot bath, I hear a wonderful sound – the munch-munching of contented ponies.

From being given just days to live by the RSPCA, with non-existent condition scores and one weighing no more than a Shetland pony, the 14 equines taken under the wing of the Horse Trust have surpassed all expectations. Within the space of just one month, “they have almost doubled in size, you can definitely see the difference,” says Charli. “They even recognise me now.” And as if on cue, a soft whicker comes from one of the heads buried in the mountain of hay piled at the edge of the barn.

Compared to the conditions they were living in previously, the large straw-filled shelter must seem like the equivalent of the Dorchester’s Harlequin Suite. Room service is pretty good, too.

“They’re going through six bales of hay a day!” Charli tells me. And who can blame them? Although she explains it took a while for the ponies to get used to this plentiful supply of food. “Some of them didn’t actually know what they were supposed to do – they just looked at it.”

But two-year-old Bill seemed to cotton on to the whole munching lark pretty quickly. “He likes to chew everything, whether it’s your arm or the fence!” laughs Charli.

Still wary of human attention, the horses need more than just hay. Charli tries to spend as much time with them as possible, doing a bit of grooming and general handling. “But as the colts get stronger, it can get quite interesting going in with them!” she says.

While most colts would prove a handful, the eight taken in by the Horse Trust were anything but feisty when they arrived. Although some of them had to double up in the few spare stables, Charli remembers: “They were so fed up with life, they just seemed happy to be with each other.”

If the dramatic rescue and extra animals hadn’t created enough work, it was only the beginning of the herculean effort to get these equines well. It was only the next day that work really kicked off. After veterinary checks, blood tests, faecal swabs and worm counts, “we treated them for bots and worms. And they were all weighed – just preliminary care to make sure they were all healthy, and to find out exactly what they had, if anything,” explains Charli.

What they had turned out to be salmonella poisoning and anaemia – quarantine, therefore, was a priority. So it helped that the Horse Trust’s resident vet – and Chief Executive – has ‘Veterinary Surgeon to the Queen’s horses’ on his CV.

“Brigadier comes down every day,” says Charli, “and, more often than not, after hours, too. He’s especially fond of Ben, who he’s got a real affinity with.”

I understood both the privilege and the responsibility of seeing the animals up close, taking every precaution possible to respect the quarantine. Biosecurity and the integrity of the quarantine is a major concern, and Charli explains: “When I work down here in the mornings, I work right through, then change clothes. If I’m on the main yard in the morning, I make sure I come here afterwards. We use Vircon J-Fluid and wash our hands – all good hygienic measures, which we’ll continue until we’re sure that the animals are absolutely healthy.”

None of the rescued equines are out of the woods yet, however. But there is hope. “I think they must all be mentally strong,” says Charli, “to accept that kind of treatment and still have that will to live, to still sit up and say, ‘We’re going to give this a go’.”

“It was very emotional,” says Charli of the night the animals arrived. “Everyone involved, from the lorry drivers to the RSPCA people, was just in bits.

“But when I walk in to feed them and they all whinny at me, I feel privileged to be able to look after them and see their journey.”

And what a journey. Where it will take them no one knows just yet, but they will never fall back into the wrong hands, as the Horse Trust will retain ownership. Says Charli: “It would be lovely to see the younger horses rehomed and become somebody’s number one, somebody’s best friend. They deserve to actually have a life. They deserve a second chance.”

I drove back down the long, winding driveway much more optimistic than when I arrived. The animals’ journey has not been easy and it isn’t over yet, but the hard work is paying off.

“I haven’t had a proper day off for nearly four weeks,” Charli tells me, without an ounce of resentment in her voice. And, seeing the horses happily munching in the barn, I believe her when she says: “But who cares? When you walk in here in the morning and see this lot, that’s thanks enough.”