Earlier this week, our Paralympic equestrian team was announced by the British Paralympic Association. 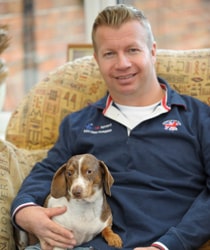 The 2012 team is hoping to continue our Paralympic success – we topped the medal table in Beijing with five gold medals, including team gold. Four of the five chosen riders will be part of the team riding at Paralympics 2012.

The chosen five have a combination of both youth and experience, with first-time selections for Sophie Wells (Grade 4 rider) and Natasha Baker (Grade 2). They will join experienced Paralympians Lee Pearson (Grade 1b), Deborah Criddle (Grade 3) and Sophie Christiansen (Grade 1a) in the hope of winning medals on home turf this summer. Anne Dunham has been named as first reserve, and both Lee and Sophie have direct reserve horses.

The British team have won team gold at every Paralympic Games since the sport was introduced in 1996. No pressure then! Paralympic Equestrian Team Leader David Hunter isn’t worried. “Great Britain will be sending what I believe to be one of the strongest and best-prepared squads to the Paralympic Games,” he says.

Craig Hunter, Chef de Mission of Paralympics GB adds: “These athletes have excellent track records, both as individuals and in the team event. I can’t wait to see how they perform in London and I hope the British public will show their support for our riders by cheering them on!”

To watch an interview with Lee Pearson on his medal hopes, click here.