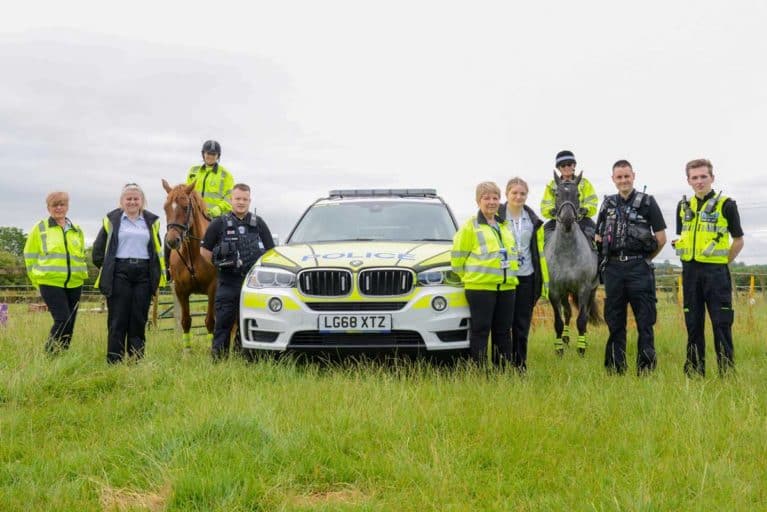 A police initiative helping to keep horse riders safer on the roads saw advice given to 12 drivers on the latest patrol with mounted police volunteers.

Riders from the Northamptonshire Police Volunteers on Horseback (VOH) scheme joined the force’s Safer Roads Team (SRT) to take to the roads in Mawsley and Nobottle as part of Operation Close Pass, a road safety initiative promoting safe passage of vulnerable road users by vehicles.

Equipped with radios, the horse riders were on the lookout for motorists who failed to slow down or give them enough room when overtaking or passing them.

Those who failed to slow down to the 15mph limit recommended by the British Horse Society, or pass with enough room – which should be at least as much as would be given to a car where possible – were stopped by SRT officers and given educational advice on why passing horses wide and slow is so important.

PC David Lee, of the SRT, said: “Horses are large animals which have evolved to run from danger, and a car, motorbike or cyclist shooting past at speed, or passing too close, can pose a real risk to everyone involved.

“Taking time to slow right down and pass horses with plenty of room, whether overtaking or going in the opposite direction, keeps drivers safer, as well as protecting the rider and their horse. Even if they can’t safely take a hand off the reins to say thank you, they’ll really appreciate it.

“Most of the drivers who passed our VOH riders did so respectfully and safely, which was great to see. Those who didn’t were either going past wide enough but too fast, or slow enough but too close, and some were waiting to pass too close behind the horses, because they just didn’t appreciate the risks of what they were doing.

“The patrols’ purpose was to educate people and it was great that everyone we spoke to was so receptive to the advice we gave, which’ll help keep drivers and vulnerable road users safer in the future.”

He added that riders are encouraged to make sure they and their horse are easy to spot by using high visibility clothing and accessories, and to thank considerate drivers whenever it is safe to do so.

Further Operation Close Pass patrols with the VOH are set to take place in the autumn.