My Account
Home News Redwings' strangles outbreak one year on

Redwings’ strangles outbreak one year on

Reflections on one of the most challenging times in charity’s 30-year history and introducing Redwings’ strangles survey. 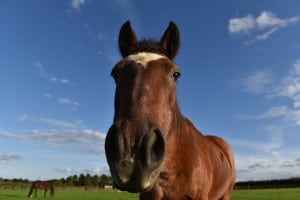 On 19th February 2015, a resident horse at Redwings Horse Sanctuary was confirmed as having strangles. Although the charity is highly experienced in managing and treating strangles in rescue cases, this was the first time in 23 years that the Sanctuary had an outbreak in one of its resident herds.

From the first identified strangles case at Redwings’ Piggots farm in Norfolk, there ensued an eight-month battle to combat the disease. At the height of the outbreak 24 horses showed varying degrees of clinical infection and tested positive for strangles, many more required testing and nine quarantine zones were in operation across the charity’s Norfolk farms resulting in an expenditure of over £4,000 a week to contain, manage and treat the disease.

Commenting at the time of the outbreak, Redwings Head of Welfare Nic de Brauwere said: “We have extremely stringent quarantine procedures in place and every horse that comes in to the Sanctuary is screened and cleared before they join a farm like Piggots. It just shows that no system or test is 100% effective.

“We are very proud of, and invest a lot of time, care and resources into understanding strangles and organising our quarantine systems to be as effective as possible and so if we can get an unexpected case amongst our residents at Redwings, I believe that it shows that anyone can. Having the understanding and practices already in place meant we could respond to our outbreak quickly and manage it effectively.”

It is this message of “if it can happen in a Sanctuary with rigorous quarantine procedures, it can happen to anyone” that has inspired Redwings to ramp up their efforts in encouraging others to #SpeakOutOnStrangles. Indeed, it was the charity’s prerogative to themselves speak out, by issuing a statement on the outbreak as soon as the first strangles case was confirmed.

“It’s time to ditch the strangles stigma,” commented Redwings Chief Executive Lynn Cutress, “and ensure that horse owners know how to identify and react to symptoms, and deal with an outbreak.

“Although our herd is now free of the disease, our battle rages on to remove the shroud of shame and secrecy, or sometimes just pure ambivalence, associated with strangles – which sadly allows the disease to continue to exist under the radar.”

Supporting Redwings during its strangles outbreak, Dr Richard Newton, Head of Epidemiology and Disease Surveillance at the Animal Health Trust (AHT), said: “The Animal Health Trust has worked closely with Redwings for over two decades on better understanding the persistence of Streptococcus equi, the bacteria that causes strangles. This work has been very important in preventing introduction of the infection into many populations of horses and ponies around the world, including the large population of resident animals found at Redwings for over 23 years.

“The AHT’s scientists and diagnostic laboratory staff worked closely with Redwings’ veterinary surgeons and staff in 2015 in devising and conducting laboratory testing protocols in order to clear this rare incursion of the disease onto Redwings’ own sites and we have together again learned valuable new lessons. The AHT applauds Redwings openness in publicising that it had strangles and its thoroughness and timeliness in dealing with the problem and returning its population to a strangles-free status – we think this is a great example for others in the horse sector.”

One year on, Redwings is launching a strangles survey, which aims to understand horse owners’ perceptions of the disease and their current approach to infectious disease prevention and control. Together with Redwings’ in-house team of veterinary surgeons, the survey has been developed in collaboration with experts at the AHT and the University of Liverpool.

Dr Claire Scantlebury, Research Fellow at the University of Liverpool, said: “We know that strangles is a common and often troubling infection in horses. We hope to capture the practical experiences and views of horse-owners, so that we can shed light on how owners, vets, and the equine industry can work together to better control strangles in the future.

“I am hugely pleased to be involved in this collaboration, this is an exciting example of putting research into practice, aimed at developing practical advice for the equine sector.”

Spearheading the survey, Redwings Education and Campaigns Manager Andie Vilela said “We’re all talking about strangles in tack rooms or in social media circles, but let’s have an open conversation about it. Tell us your experiences and your thoughts on improving how strangles is dealt with by completing our survey and help us make combatting the disease a reality”.

With support from the British Horse Society, SEIB insurance, the AHT and the University of Liverpool, the charity has high hopes for a great response to the survey.

“We are interested in hearing from horse owners regardless of their experience of strangles,” explains Andie. “Every respondent is incredibly important to us, so everyone who completes the survey will receive a free healthy treat from Dr D’s Tasty Treats for their horse or pony. They will also receive a 15% discount on purchases of Safe4 disinfectant, which is proven to be effective against the strangles bacteria.”

The strangles survey will open online here – www.redwings.org.uk/strangles-survey – from 08 April to 08 June 2016.

The survey is completed anonymously and all information supplied will be kept on password protected computer databases and not used for any other purpose beyond this study.

“Silence spreads strangles. The British Horse Society is keen to echo the message that keeping quiet in a strangles outbreak runs the very high risk of the disease being spread and more horses suffering from this debilitating and highly infectious disease. We urge all horse owners to complete the Redwings survey to help provide key information and experiences involved with strangles”.

“We’re all about healthy horses, so we are delighted to support this survey by rewarding anyone who completes it with free treats for their horse. Strangles awareness and prevention is a crucial issue for horse health, which is too often overlooked so it’s fantastic that Redwings is highlighting this issue.”