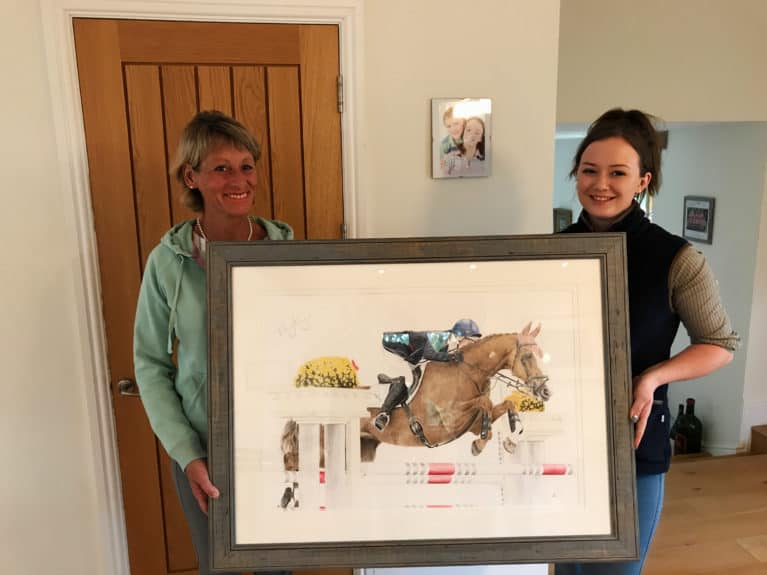 Jenna Green is a nineteen-year-old artist suffering from CFS/ME. She recently completed a piece featuring event rider Mary King at the Land Rover Burghley Horse Trials, using a picture taken back in 2010. Mary was kind enough to collaborate with Jenna by signing the piece, and 30% of all proceeds from the original sale will be donated to the ME Association. A further 40% of all profits generated by prints and merchandise sold will also be donated.

Jenna has suffered from myalgic encephalomyelitis (ME) since she was around seven years old, but had always dreamt of becoming an event rider – Mary has been one of her biggest idols since she was young. However, as Jenna’s condition developed, she was forced to stop doing the things she loved, including riding, and had to leave school before sitting her GCSEs.

In February this year, Jenna decided to have a go at drawing. “If I couldn’t ride horses, why not create pictures of them,” she says. Jenna’s art gained popularity, and she realised that it may be worth doing a piece to help raise money for ME.

“I knew that Mary’s daughter, Emily, had symptoms of it when she was younger, so I thought that getting such a legendary event rider on board would help to raise awareness. I didn’t expect anything to come from it.” Luckily Mary immediately agreed.

“Fortunately, Emily managed to recover, but many people aren’t this lucky,” says Jenna. “By selling the signed piece, we’re hoping to not only aid in recognition for the illness, but also help other sufferers feel a glimmer of hope upon realising that if Emily can get better to the degree she has, then anything’s possible!”

Approximately 250,000 people suffer from this condition in the UK. The ME Association is working towards providing not only more support for sufferers, but also better diagnostic testing and research. While the NHS and other medical bodies have only just accepted CFS (chronic fatigue syndrome) as a neurological condition, they still don’t have the understanding to treat patients properly.

To see more of Jenna’s work, head over to her Facebook page.