I don't know about you, but I'm not sure I have any nerves left after the eventing exploits over the last few days. There has been furious nail biting in the equestrian community as we scrabbled around for mobile phone internet, non-shuddery web coverage and red-button TVs for minute-to-minute coverage of the London 2012 Eventing. 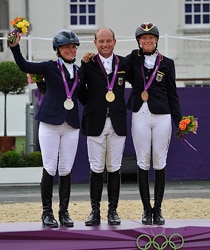 And it’s been important to watch every single minute, as high-standards across the board led to a point-by-point fight at every stage. By the showjumping, we were all sitting in the H&R offices on the edge of our seats, hopping up and down to check the designated viewing computer. Our greatest team yet captured the team silver, but how did it all unfold?

How proud were we when all our riders rocked their dressage tests? Yes, okay, there were a couple of minor slips here and there, but hey, that’s working with horses for you. The real surprise was Japan’s Yoshiaki Oiwa, who rode a stunning test on Noonday de Conde and swooped in to take the first place position with a score of 38.10.

Mary King was the highest placed British rider after the dressage, sitting a comfortable 12th on 40.90; Tina Cook was 14th with 42.00; William Fox-Pitt was joint 17th with 44.10; Zara Phillips was joint 24th on 46.10 and Nicola Wilson was joint 39th on 51.70 – we were pretty well-placed in a field of 74. A particular well-done has to be given to Tina and Miners Frolic in this phase for riding through torrential rain, thunder and lightening and still gaining a great score. Then, can you believe it, they stopped play due to ‘bad weather’? But we’re British, we’ll keep a stiff upper lip about it.

Despite commentary deriding Sue Benson’s cross-country course as too easy, it threw up significant challenges for the all the riders. The terrain and winding nature of the course certainly seemed to take its toll of the horses – it certainly took its toll on me when I walked it and that definitely wasn’t at a galloping pace!

There were fifteen falls in total, and we particularly felt for first-placed Yoshiaki Oiwa who parted company with his horse at the huge drop fence. We had our hearts in our mouths at Mary’s ‘handbrake off’ approach to the cross-country with Imperial Cavalier champing at the bit and felt for William when Lionheart seemed to tire further into the course. But all in all, our riders were flying and we finished with all five riders within the top 22, and Tina and Mary particularly well placed in 5th and 6th respectively. They were both within 3 points of the joint leaders – just one pole down in the showjumping. New Zealand’s Mark Todd did a foot perfect cross-country, until the very last fence that is. Going through it, he showed us that even the top rider-horse combinations found the course tiring, and we clapped him just as loudly as we had our British riders.

As the final day dawned, Germany were leading on 124.70, we followed close behind on 130.20, Sweden were in third at 131.40 and New Zealand were in fourth with 133.40. It really was all to ride for! As all the teams sent forth their riders, the places chopped and changed. We moved into team and individual gold, and out again. Then we dropped to bronze as Sweden’s last rider crossed the finish. A fantastic ride from Tina pulled us back into silver medal position – our third medal of the Games – and the crowd went wild (as did we in the H&R offices)! I’m only sad that the horse-sport virgins haven’t been able to accidentally happen across the tension and get hooked!

It’s been hard enough to catch the coverage when you have a vague idea of where to look. Perhaps the rest of the equestrian sport will get a boost in coverage over the next few days after our medal win? We can but dream!

Let’s hear it for the girls!

As only three riders from each country are allowed to compete for the individual medals, Tina (clear in the first jumping round!), Mary (tiny time penalty) and Zara (who had an unlucky fence and a tiny time penalty) qualified to fight it out for the individual medals. Because of this, William, although finishing in the top 25, missed out on the chance of riding for an individual place – such are the perils of being in such a strong Olympic squad!

Zara was our first rider and she couldn’t have done any better on High Kingdom, jumping clear, finishing within the time and racing right to the top of the leaderboard (cue lots of jumping around and screaming from the H&R team!) I hope it’s clear to all the doubters why she was chosen for the team! Tina came next and had an unlucky two poles with Miners Frolic, knocking her out of contention for a individual medal, but definitely not dampening her success as part of the team medal success.

Deep inward breath taken, we braced ourselves to watch the great Mary and Imperial Cavalier, gasping as he pulled into all the fences – who would have thought he’d have so much running left. Much more than we did, watching the Olympic coverage so closely is tiring stuff. Alas this time an individual for Mary was not meant to be. An almost imperceptible brush from Imperial Cavalier’s legs brought down the top of the gate, but the rest of the round went perfectly. As it turns out, this one fence wouldn’t have made a difference, as German rider Sandra Auffarth finished in third with a score that was just out of reach for Mary, even with a clear round! In the final rankings, Mary was 5th, Tina was 6th and Zara was 8th. Remember, this is in a field of 74 of the top eventers in the world – what an amazing feat!

All our riders rode their hearts out and were rewarded with a much deserved team silver, which Zara (along with the rest of the team) amusingly received from her mother, Princess Anne. After such a gripping few days, H&R is not sure that we can take much more pressure. Thank goodness for our Wednesday breather before the dressage starts, although our nails won’t have grown back by then!