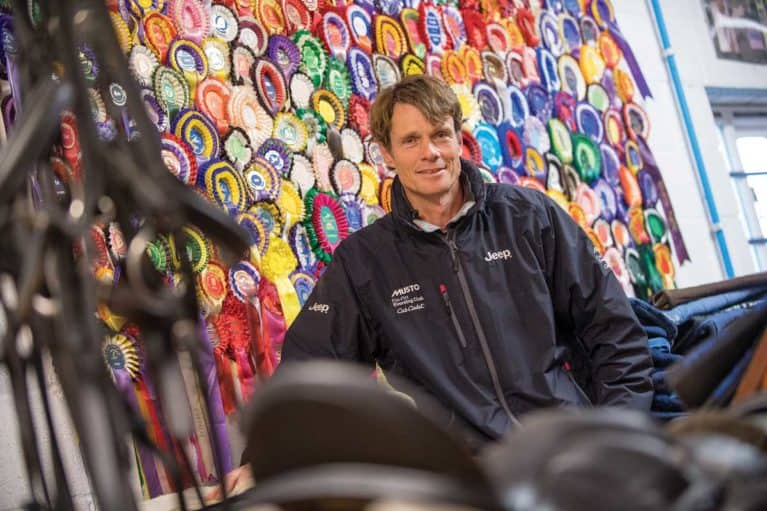 Hometown: Hampstead, London and Nonington, Kent, but now based in Sturminster Newton, Dorset

I’m not a natural winner, I’ve just learnt how to win,” says William, belying a successful international eventing career that has spanned over three decades. His accolades within that time are remarkable – in 2011, he became the first rider ever to win five of the world’s six CCI**** events and his record-breaking six Burghley wins sets a tremendous precedent for those who wish to follow in his footsteps.

The best bit? He’ll happily stick the kettle on to chat about what’s helped make him of one of eventing’s brightest stars.

The riders who have influenced me most

When I was growing up I very much looked up to Lucinda Green, Richard Meade, Ginny Elliot and, more latterly, Mark Todd. Lucinda was my heroine – I loved the way she approached the sport and she wasn’t just a rider, she was a real personality. She still is, actually – she’s an example to everyone about energy, and the power of positive thought and enthusiasm. I was also lucky enough to be in a team with Ian Stark, which was incredible.

In my generation, I admire the real horse-thinkers – Pippa Funnell and Tina Cook are riders who put their horses first and can really get inside their heads. The best horse I’ve ever ridden

Tamarillo would be the most extraordinary, talented, out-and-out superstar, and I felt that anyone could have won Badminton on him, but then Chilli Morning was remarkably good, too. He’s a very level-headed competition horse, and he really suited me, even though he’s a stallion. The best piece of advice I’ve ever been given

It has to be, quite simply, ‘never give up’. It’s easy to give up and sometimes, with certain horses, you’d be stupid not to, but more often than not, trying and trying again is what produces eventual success.

The horses I’d love to ride

I’ve always rather loved Andrew Nicholson’s Nereo – I admire his courage and continuity, and the fact that he can win Badminton, aged 17, after the career he’s had. He’s some machine.

I’d be too big for Michael Jung’s La Biosthetique Sam FBW, but I’d love to have a sit on him because he’s an amazing horse in the sense that he’s so ordinary – he’s neither an amazing mover nor an amazing jumper, but my goodness he’s a doer. It’s just in him to be so trainable and to want to win. I’d love to feel both how ordinary he is and how accurately he’s been trained. The stand-out moment of my career

I’ve been lucky and have had a lot of very happy moments, but winning my first Burghley in 1994 on Chaka was a real stand out. I was a bit of a new boy, I was quite young and Chaka was quite a new horse to me. Off we went to Burghley and suddenly I found myself in the lead.

When you’re young you’re full of unrealistic ambitions, so I’d probably have told you I always thought I was going to win, but I just remember thinking, ‘I’ve done it now and I never have to do it again – I’ve justified all my mother’s investment and energy, and I’ve justified being given this horse’. On the other hand, the saddest moment of my career was the next year at Badminton, when Chaka was in the lead and failed the final horse inspection. There are many ups and downs. I like to spend time with my children and try not to start riding until 9am so I can do the school run. I’m also into breeding chickens – my mother always had them and we have lots running around at home. Bantams, Frizzells – they’re just a good distraction.

The career I could have had

It would always have been horses. I think I’d have been in the racing industry – probably as a trainer or maybe as a bloodstock agent. I love horses and I think I can appreciate quality in a horse. I don’t really know why I’m in this sport – it’s just the way I was pushed!