The horse novel heroines we still secretly want to be 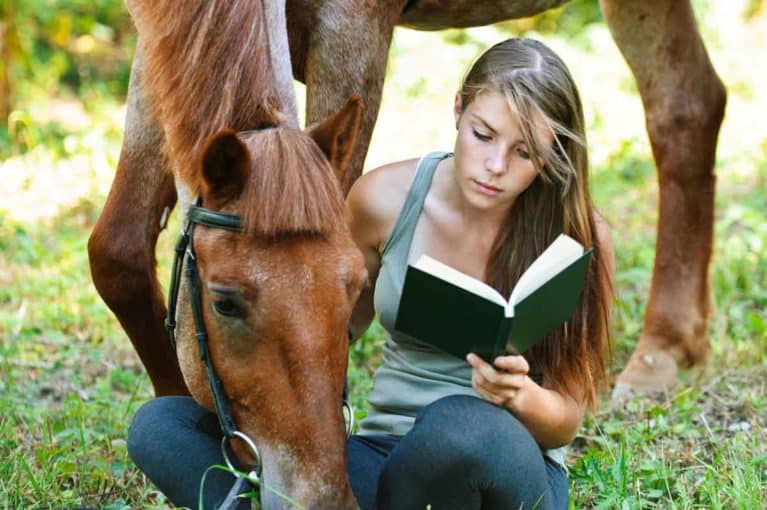 Is there any pleasure in life more simple than curling up with a good (or, okay, compellingly rubbish) horse book? We don’t think so. But if your reading habits have secretly shaped your riding life, you’re not alone – so we’ve rounded up the leading ladies whose lives we’ve coveted the most…

Fenella Maxwell in Riders – Who among us didn’t learn some of life’s most valuable lessons – for better or for worse – from the pages of a paperback Jilly Cooper? It’s hard work to find a copy of this bible of, erm, riding that doesn’t look rather worse for wear, and that’s because it’s de rigeur for teenagers to pass their copy around to everyone in their circle until, of course, a savvy mum or DC finds and confiscates it. Those of us who discovered Riders at that pivotal age wanted desperately to be like pony-mad, occasionally bratty Fen, who leapt into the eyes of the British team selectors with the help of an equally bratty pony named Desdemona. Pass us a Pimms and a bottle of Fracas, darling.

Stevie or Carole in The Saddle Club – It’s a truth universally acknowledged that, no matter how many decades have passed since your days aboard ponies, a well-thumbed pony novel or twenty are allowed to remain steadfast on your bookshelf. One of the best-loved of the genre is the expansive Saddle Club series which, for all its inaccuracies and improbabilities, probably spurred on a fair few of your own misadventures. Though the Club was a trio, there were two members in particular that every girl wanted to be like: you were either an aspirational Carole – truly, madly, deeply devoted to everything equine and the one most likely to make a career in the industry, or you were a Stevie – mischievous, prone to a prank or two, but harbouring an unshakeable talent in the ring. No one really wanted to be newcomer Lisa with the overbearing mother nor – heaven forbid it – unpleasant Veronica, though we’ll forgive you for coveting her designer jods and natty tweeds.

Jinny of Finmory – Graduates of the Saddle Club who wanted something a little meatier, but weren’t ready to relinquish their stash of pony paperbacks, turned to Patricia Leitch and her Jinny of Finmory series. Set in the rugged Scottish wilderness and tangled up in threads of folklore and gypsy magic, the series followed the feisty titular character and her impossibly tricky Arab mare, Shantih, rescued from a cruel travelling circus. Half bonkers adventuring, half riding across untamed countryside to a tiny village school, it was – and is – the dream series for anyone who’s ever dreamed of giving up on society in favour of a life spent with horses.

Sarah Brown in International Velvet – National Velvet, its almost totally unrelated (and separately authored) predecessor might be the better piece of literature, but Bryan Forbes’ unabashedly ‘70s fever dream of a book – and a film – made several generations of teenage girl believe that they could make it to the Olympics after approximately three days of hard graft, just like Sarah. It also put those self-same girls off the idea entirely if it would involve putting their beloved horse on a plane.

Molly Watson in In the Pink – There’s a touch of the Bridget Jones about most horsey women, and never has it been more neatly encapsulated than in Molly’s diaries. For those working in the city, it’s a blissful daydream to imagine abandoning London life in favour of a ramshackle cottage, an unsuitable horse or two, and an off-the-cuff devotion to hunting – no matter the comical disasters that crop up along the way. Actually, scratch that – for those in pursuit of a Peppermore, a rare and particularly high-quality specimen of hunting gentleman, perhaps it’s more enticing to be like sister Bee, swatting away ravenous hoards of men with names like Odious Daniel.

Riding Course Summer was one book I returned to time after time. Pure joy. I think it is by Patricia Leitch, but not sure as it was way back. I still read it though if I find the time.

Oh I loved the Jinny series so much! The Saddle Club too, but I felt a natural affinity to Jinny and loved the sense of folklore magic and adventure