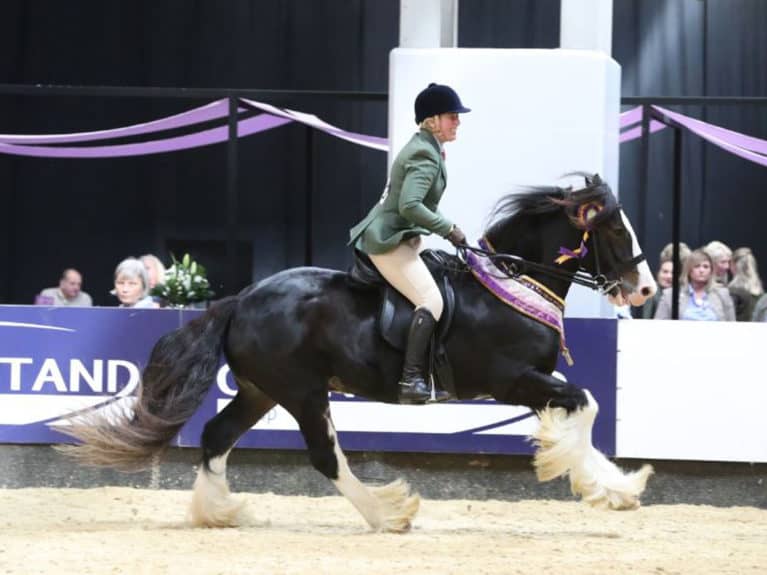 It’s with great excitement that Horse of the Year Show (HOYS) are introducing a brand-new class for 2019. In support of the SEIB Search for a Star series (SFAS), which has proved a popular addition to the timetable since it was introduced in 1998, HOYS will this year welcome purebred traditional cobs to compete in the SEIB Traditional Horse/Pony class. At each of the five SEIB qualifiers, one solid and one coloured horse will go through to HOYS, meaning a total of ten traditional cobs will have their time to shine at the UK’s most prestigious horse show.

Event Director for Horse of the Year Show, Emma Williams, said “We’re delighted to be opening up the opportunity for more horses and more riders to be eligible to compete at HOYS, which is so widely recognised as the pinnacle of the showing year. Up until now we’ve not had a class available for solid coloured traditional cobs so this will provide them with the opportunity to compete amongst the highest calibre of competitors, along with their coloured counterparts. The success of the new addition will determine its longevity at HOYS, therefore we’d like to encourage as many amateur riders as possible who enjoy competing their traditional cob to make the most of their opportunity to compete under the spotlight at HOYS.”

SEIB’s Marketing Manager, Nicolina MacKenzie said, “This brand new competition will support the SEIB SFAS ethos of providing opportunities for grass root riders with their beloved horses and ponies.  We’d like to say a big thank you to HOYS for their continued support of the series and for giving true amateur riders a shot at the big time. Nearly 20 years ago, HOYS allowed SEIB to take ex-racehorses there for the first time – and look what a success that class has become. We hope and believe that traditional cobs will prove to be as popular.”

Long-standing SEIB SFAS judge Richard Ramsay said, “This is a really interesting addition to Search for a Star. The traditional gypsy cob qualifiers deserve plenty of support and I’m very much looking forward to judging the classes.”

This new SEIB SFAS competition for traditional cobs offers an incredible opportunity for the type. Whatever colour they happen to be, they’ll have a chance to compete at HOYS.  Nicolina continued, “Traditional cobs come in such a glorious range of colours and to date the coloureds are the only sector that has been represented.  This new series will give all traditional cobs, including the solid coloured horses, a pathway to display their beauty and talent.”

The new SEIB SFAS competition for traditional cobs is open to registered cobs only. Horses and ponies will have to have a TGCA passport or have theirs over stamped by the organisation, to prove that they meet the breed standard.  However, as always with SEIB SFAS, no competitor has to be a member of any organisation.

This new competition will follow the standard rules for SEIB SFAS, which are strictly enforced. The first qualifier of the season takes place at Osbaldeston Riding Centre on the 14th April. Leading equine Insurance brokers, SEIB Insurance Brokers set up SFAS over 20 years ago so they could offer a unique competition opportunity to many of their amateur rider customers. SEIB has a long association with the showing world and is renowned for supporting many equestrian events and activities in addition to SFAS.

HOYS takes place this year from 2 – 6 October 2019 at the Resorts World Arena, the NEC, Birmingham for another year of breath-taking displays and unbeatable competition. Tickets and a full timetable of events will be released in February.

To stay up to date with the latest HOYS news and to be the first to know what’s happening, sign up to our newsletter here, hoys.co.uk/newsletter-sign-up/