Want to take your horse and your riding to the next level? Trainer, rider and FEI dressage judge, Stephen Clarke FBHS, has some great exercises for flying changes and pirouettes 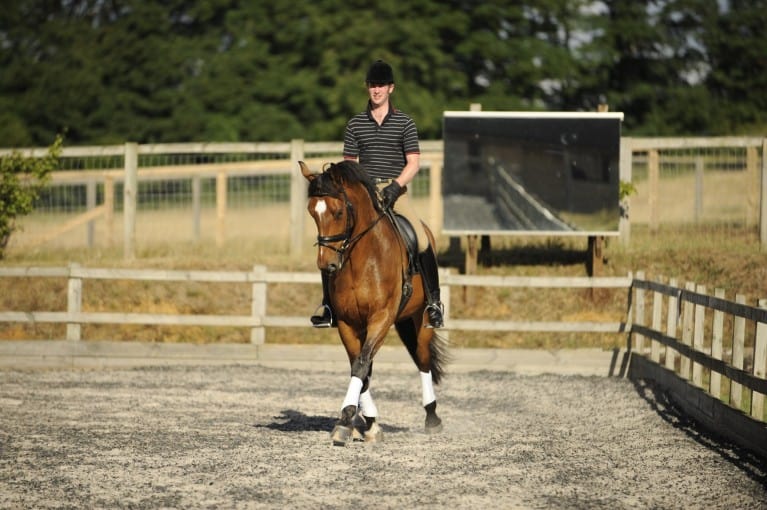 Flying changes and pirouettes may seem like movements carried out by high-powered dressage horses, but anyone can have a go. In fact, the earlier a horse learns flying changes, the more it becomes second-nature.

Similarly, once your horse understands what is required for walk-pirouettes, the foundations are there for when he develops the strength to perform the movement in canter.

Here, Stephen helps two horse-and-rider combinations work on flying changes and pirouettes – and you could find the exercises he suggests useful, too.

Eleven-year-old Dickens Chance (aka Comet) is a home-bred Hackney x Hanoverian, owned by Stephanie Powell-Richards. He qualified for the National Dressage Championships at Novice level in 2006, then spent most of 2007 training at home.

Comet has difficulty understanding flying changes, so Stephen suggested some exercises to make clear what is required.

The reason Comet doesn’t perform flying changes is simply because he doesn’t understand what Beth is asking of him.

I’d like to show her some exercises that will help explain to Comet what he has to do – perfecting the changes can come much later.

Make a canter-walk transition, then, after a couple of strides, ask for left canter. Move back on to the right rein and maintain counter-counter, then walk before asking for right canter.

Repeat this exercise several times. This is important in helping Comet understand that after counter-canter, he should switch to canter on the correct lead.

Now Comet is prepared to make his first flying change. Try this exercise to initiate the reaction…

Ride a 20-metre circle on the right rein in counter-canter, making sure your horse is straight and balanced.

Staying collected in the counter-canter, push your horse into the left rein to get a small, supple, right flexion.

Balance your horse before using your schooling whip to give him a sharp tap as you ask for right canter. Because the outside hind makes the first step in canter, make sure your whip is in your outside hand, to activate this leg.

On first attempt, Comet only changed his front legs (left), making him disunited. This is not a problem – he now understands that something has to happen. I’m not interested in getting the changes perfect at this stage, just in getting the idea into his head.

On second attempt, Comet changed with his hind legs, too, though he ended up going slightly sideways. It’s important to keep your horse straight throughout, so this doesn’t happen.

If your horse makes mistakes, don’t worry! Comet tries hard and this is what matters. Play with this exercise and take your time – there’s no rush!

Seven-year-old Hanoverian, Don Amore (aka Peter), is a working stallion and was Reserve Champion in the British Warmblood Society’s Stallion Grading 2005.

He has great dressage potential – last year, he competed at the British National Championships at Novice and Elementary levels, and is currently working on flying changes and towards more advanced movements, such as canter pirouettes. Stephen suggests some exercises to help develop both of these.

If you’re ready to perfect your horse’s flying changes, it’s important to choose a suitable point in your schooling session to work on them.

Doing some lateral movements first will help, as you can use these in your schooling exercises to help with the changes…

Perform canter half-pass, then remain in counter-canter on reaching the track.

After a couple of strides of counter-canter, change the flexion to the inside and ask for a flying change by using your left-canter aids.

Really concentrate on keeping your horse straight before, during and after the movement – horses new to flying changes can often fall out through their outside shoulder during
the transition.

Try riding the change at B or E – these are ideal places, as they allow you to really work
on straightness.

Peter already has a good understanding of flying changes, so Lynn can start to work on perfecting them. Although Peter is working toward more advanced movements like canter-pirouettes, it’s important not to ask too much, too soon.

True canter-pirouettes require a lot of strength – which Peter has yet to develop. Therefore, I’d like Peter to learn to sit back on activating hind legs, in order to build foundations for the movement.

Canter-pirouettes can take years to perfect, as horses need to be well-developed, both muscularly and in their training.

In order to perform a pirouette correctly, the horse needs to learn to sit back on activating hind legs.

Not ready to tackle canter-pirouettes?

Walk-pirouettes (also known as ‘turn on the haunches’) are a great place to start and even the most inexperienced horse or rider can have a go.

They are great for building co-ordination in the rider, and improving collection and engagement in the horse.

The movement involves the horse making a small circle with his forehand (shoulder), keeping his hind feet marching and more-or-less on the spot, and maintaining a clear, four-beat walk throughout.

Large quarter-turns are often asked for in Elementary dressage, and require only a small degree of collection and basic outside-leg control. Here’s how to ride it…

Sit in the same position that you would to ask for inside bend.

With your outside hand, use gentle half-halts as required.

Make small, rhythmic nudges on the girth with your inside leg to create impulsion.

Keep your outside leg behind the girth to guard the haunches, then make small, rhythmic nudges to maintain tempo.

Try this exercise as a good introduction to the movement…

On the left rein, come down the long side of the school in canter and exaggerate travers to the left.

Ride a small circle in travers position – this is really just a huge working pirouette and the beginnings of a true pirouette.

Really let the travers come through on the circle, then ride out of the ‘pirouette’ back along the long side of the school.

Repeat this on the right rein when you’re ready. This is really just paving the way for more advanced work, so only do small amounts of exercises like these in early training.

Now, take the pressure off and allow your horse to stretch down in canter – but watch he doesn’t slither on to his shoulder. Trot when you’re ready and allow the whole of your horse’s body to stretch through.

Try not to ask for too much sideways in this movement, until your horse learns to come back and sit on those activating hind legs – that is real lightness from engagement. 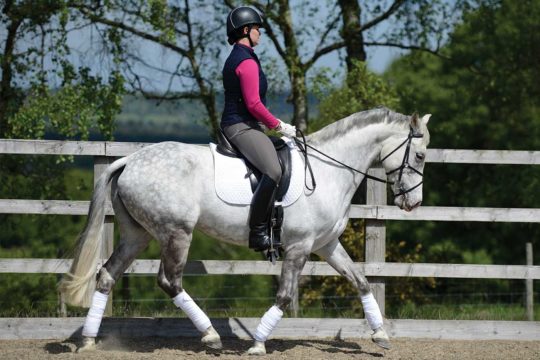 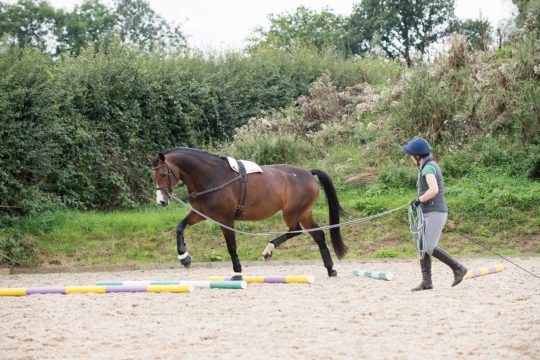