An Idiot Aboard – Endurance Challenge

Peter Wilkes, MD of leading equestrian manufacturer Vale Brothers Ltd, will be taking on the challenge of riding in the 40KM Endurance Ride at Royal Windsor Horse Show. This would be a challenge for most experienced riders, let alone Peter, who has set himself the challenge to complete the ride after having ridden only 30 times! 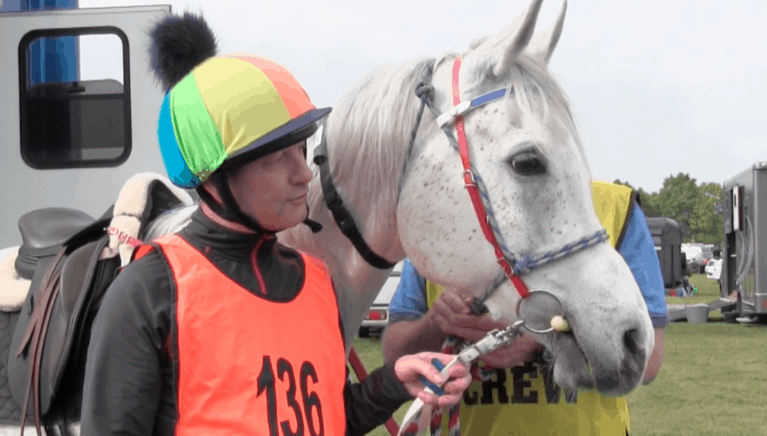 After being inspired by the British Equestrian Trade Association’s (BETA) 2016 campaign ‘Take up the Reins’, Peter Wilkes, MD of Vale Brothers Ltd, set himself a personal challenge. This was to learn to ride and compete in a 1m showjumping class – all in just 20 lessons. In October, Peter completed his goal with just one – or was it two? – unscheduled dismounts. Peter was aged 54 at this point.

The easy option would’ve been to ‘hang up his boots’, bask in the glory (or lick his wounds!) and pursue a slightly less challenging pastime. Instead, Peter has chosen to push his body to the limits – easily done! – by entering a 40km endurance race organised by Endurance GB at Windsor Great Park on 12th May. Peter has got through the ballot system and has now set his sights on getting a Grade 1 in the event.

The ride at Royal Windsor will be Peter’s 30th time horse riding.

Having taken a break after the showjumping challenge, Peter’s endurance training needed to be fairly swift and intense due to the time constraints. The ‘less is more’ approach probably wasn’t the best idea, but a lack of practise isn’t likely to put him off. His ride on the beach and a quick whiz around Wolverhampton race course will teach him a trick or two – but that’s another story!

Peter’s equine partner is an Arab called Billy who has been kindly loaned to Peter by his endurance rider and owner Charlie Chadwick. Charlie has an impressive record of endurance achievements including representing Team GBR at the 2016 European Championships, and he will ride alongside Peter at Windsor. Billy is an experience endurance horse and likely to know a great deal more about competitive racing than his novice rider ever will. Did someone mention heart rate? Perhaps it’s Peter’s that will need to be monitored…!

The high-profile fixture attracts professional and amateur riders from all around the world and is scheduled to take place in the grounds of Windsor Great Park during the Royal Windsor Horse Show.

In order to give Peter an incentive to complete his task intact, he is raising money for two charities – the Royal Drawing School and Midlands Air Ambulance.

He would like to raise as much money as possible for these worthy causes, whilst at the same time trying to promote riding to newcomers and in particular, partners of existing riders. If you would like to support Peter in what will be a very challenging ride – especially for a novice rider! – please consider donating to his chosen charities online at: