Checking your horse’s vital signs regularly will help you establish a benchmark for monitoring his health. Use our handy guide to keep a record 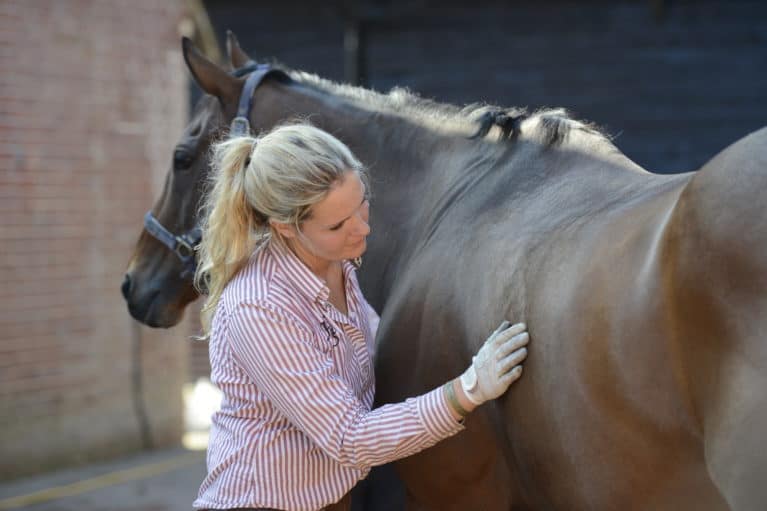 Navigating your horse’s health can seem like a bit of a minefield – what’s a major concern? What’s not? When should you call a vet?

Knowing what’s normal for your horse means you can spot a change and seek professional help if needed, before it becomes a major issue. Check your horse’s vital signs once a week and keep a record of them, then check them again if his behaviour changes or he seems under the weather.

Why? Your horse’s respiratory system is a well-oiled machine, allowing for maximum output with minimum effort – essential for hard work, fastwork and jumping. Laboured breathing or a very high respiratory rate is a clear indicator of a problem in the lungs or a pain response.

What? A healthy respiratory rate is very slow, as your horse’s lung capacity is much greater than that of a person. At rest, he should take 10–20 breaths per minute, but this rate increases when he’s working hard or when he’s investigating an object by smelling it.

How? Observe your horse’s ribcage and belly, and count his respirations by the movement of his sides. Alternatively, hold your hand near his nostrils to feel the breaths. Count the number of breaths over 30 seconds, then multiply by two. An inhalation and exhalation count as one breath. Why? Just as in humans, a high temperature can indicate illness or infection.

What? A healthy adult horse should have a temperature of 37.2–38.3°C – taking it regularly will help you establish what’s average for your horse. Keep in mind that temperature can be affected by hot weather or exercise,
so take it when your horse is at rest.

How? Your horse should be tied up or held throughout the process, and you should stand safely to the side. Use a small amount of petroleum jelly on the end of the thermometer as a lubricant and insert it into his rectum at a 45° angle so it touches the wall. Don’t remove it until it beeps. If using a mercury thermometer, shake it gently before inserting and leave it in for 60 seconds.

Why? A healthy horse at rest has a slower heart rate than a person. An increase in beats per minute can indicate fear, excitement, pain or illness – ordinarily, the higher the heart rate, the more severe the problem. A slower-than-average heart rate is only a concern if it’s not the norm for your horse, so it’s important to know what to expect when you take it.

DID YOU KNOW? Arrhythmia – or occasional missed beats – is rarely a symptom of a serious problem, but if it’s paired with a change in behaviour, speak to your vet.

What? Ordinarily, a resting horse will have a heart rate of 28–44 beats per minute. An extremely fit horse – for example, an upper-level eventer or a racehorse – will have an increased level of aerobic fitness and the capacity to circulate more blood with every heartbeat, meaning that his resting heart rate may be considerably lower. A heart rate of 20 may not be abnormal in this type of horse.

How? If you have a stethoscope, hold it just behind your horse’s left elbow and count how many heartbeats you hear in 15 seconds. Multiply this number by four to calculate the beats per minute.

If you don’t have a stethoscope, you can take a reading from the mandibular artery. To do this, place your fingers under your horse’s jaw, in the space between his cheeks. Feel around the inside of his cheekbone until you find a large, rope-like structure – that’s the artery. Press down lightly until you can feel the pulse. Only take a pulse reading with your index or middle fingers – your thumb has its own pulse, which can be difficult to differentiate from. Count how many beats you feel over 15 seconds.

DID YOU KNOW? Your horse’s heart rate is different to his digital pulse, which is taken just below his fetlock and can indicate a problem in his hoof if it’s bounding.

Why? Your horse’s gums are the largest canvas on which to observe his mucous membranes, which are present in the lining of his nostrils and his eyes, too. Your observations can give you an insight into his circulation and hydration levels.

What? In a healthy, hydrated horse, the mucous membranes will be salmon pink and moist. His capillary refill time, or the time that it takes for the delicate blood vessels of his gums to fill, will be less than two seconds. Extremely pale gums can be an indicator of anaemia or extreme blood loss, while red gums can be caused by toxicity or shock. Gray or blue-tinged gums can indicate more severe shock or illness, and yellow gums are associated with liver problems. A capillary refill time of more than two seconds can indicate a circulation problem or dehydration.

How? Lift your horse’s upper lip so that you can see his gums and observe their colour. To check capillary refill time, press on his gum with your thumb for a couple of seconds. When you take it away, the area should be pale. Count how long it takes to return to its normal colour. Touch his gums to check whether they’re dry or tacky, which will help you ascertain his hydration levels. Why? Your horse’s digestive tract is a complex machine that must be kept ticking over for maximum efficacy. The golden rule of feeding – little and often – is based on this long and incremental digestion process. Because of this, your horse’s gut should constantly make noises as it moves food through – a silent stomach is cause for concern.

What? A healthy gut makes a variety of noises, from gurgling sounds and fluid tinkling to roaring and whooshing noises. The most concerning noise is one that is absent, as this indicates a loss of function in that area of the digestive tract and can be a sign of colic. Listen often to establish what’s normal.

How? Using a stethoscope or just your ear pressed to his side, listen for noises behind your horse’s last rib, level with his hip. Listen for 15 seconds, then move down to stifle level and listen again. Repeat on both sides, at both levels.

DID YOU KNOW? Your horse’s stomach is about the size of a rugby ball, with a capacity of eight to 15 litres. In comparison, a cow’s primary stomach – the rumen – has a capacity of about 184 litres.

Need a place to keep track of what’s normal for your horse? Horse&Rider’s got you covered, with a handy printable chart that’s perfect for keeping at the yard.