My Account
Home News Badminton 2018: British rider on top after day one

Badminton 2018: British rider on top after day one 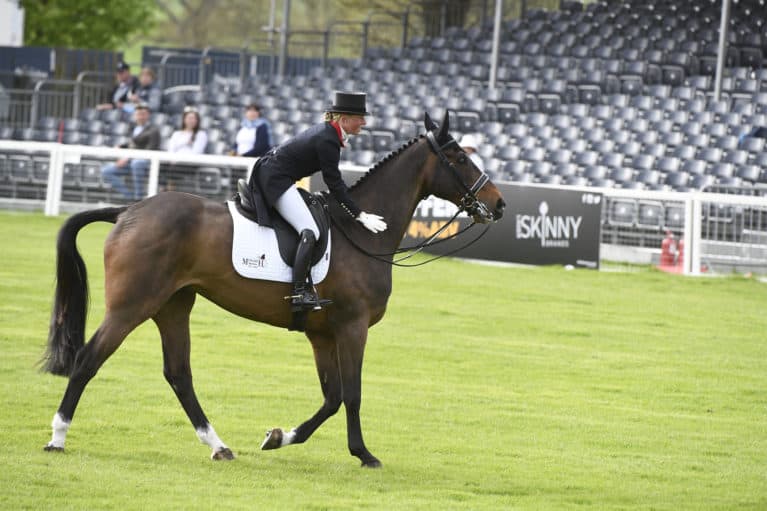 The Mitsubishi Motors Badminton Horse Trials is nothing if not full of surprises and fierce competiton. Here’s H&R’s roundup of the action after the first day of dressage

Despite many fears about the weather, the first day of dressage at Badminton dawned bright and sunny. The morning session was full of notable names, including last year’s winner’s Andrew Nicholson and Nereo, and fellow Kiwi Mark Todd with Leonidas II. Britain’s Gemma Tattersall put in a confident round with the first of her two rides, Pamero 4, despite the fact that their still a relatively new combination and tackling their first four-star together.

Oliver Townend, who comes to Badminton with two legs of the Rolex Grand Slam already under his belt, took the lead just before the morning break. Four-star debutant Cooley SRS is the first of two rides that Oliver is hoping can net him the $350,000 prize, with Ballaghmor Class to go tomorrow. Despite his lack of experience, Aero (as he’s known at home) put in a classy performance that was only marred by a few small mistakes to score 25.9 and stay at the top of the table going into the lunchtime break.

The afternoon session got underway and before too long, the German wonder-team of Michael Jung and La Biosthetique-Sam FBW had entered the ring. Although not the flashiest of horses between the white boards, Sam is always consistently correct and Michael is able to eke the maximum number of marks he can from their tests. They were winners here in 2016 and have been runners up twice, so it was no surprise to anybody that they went to the top of the leaderboard with a score of 24.7.

Many tried and failed to catch them as the afternoon progressed, including Kiwi Tim Price and Ringwood Sky Boy (25.8), Lauren Kieffer and Veronica for the USA (25.0), and our own Pippa Funnell and Billy Beware (25.7). In fact, given their track record of four-star success, you’d be forgiven for assuming that Michael and Sam would be overnight leaders. However, the golden rule of eventing is that it’s not over until it’s over.

Coming here off the back of their team gold medal and individual fifth place at the European Championships last summer, Ros Canter and Allstar B, the penultimate pair of the day, rode their socks off to overtake the German duo. Not only that, but they did it by pulling off a personal best score of 23.9.

Last rider of the day, Yoshiaki Oiwa, and The Duke of Cavan, who are the sole representation from Japan, slotted into third place with a score of 24.9.

Here are the top ten at the end of day one…

With another day of dressage and several strong combinations still to run, the scoreboard could still change before the challenges of cross-country day. Can any other combinations sneak ahead of Michael and Sam? Keep an eye on the Horse&Rider website and social media feeds to find out…