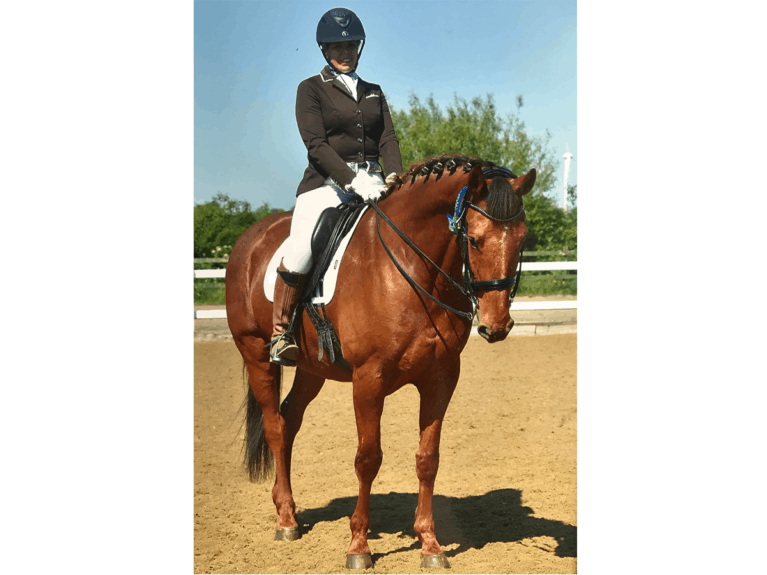 We competed at Alnwick Ford Area Festival at the weekend, coming 5th in the Medium Silver and qualifying for second round. I’m really pleased to qualify and we now lots of practicing to do. We’ve also qualified for the British Dressage Regional Championships in July, so we have lots to look forward to.

We’ve also stepped up to Advanced Medium level, which we’re thrilled about. I decided to keep the pressure off and compete unaffiliated first, so we’ve been taking part in the Tyne & Wear dressage series, sponsored by Dengie, at my yard. We use British Dressage listed judges, so it’s a great way of seeing where we are in our training before making that jump to affiliated. So far we have won both times and scored 63% and 63.75%, so we just need to keep practising for higher marks!

At home I have been starting to ride my three-year-old, Leckie, under saddle. He’s been a little star and has taken it all in his stride. I‘m very excited to be finally riding him after all this time watching him grow! All the horses are looking fabulous on their Dengie diets, especially Taz, who’s gleaming. I’m really lucky to have such fantastic nutritional support for my horses. When life gives you lemons, make lemonade. Between Charlie not being right and life generally getting in the way, our plans to get back out competing keep getting postponed. However, we’ve been working our socks off at home so when we (finally) get to go to a party, we’ll be fully prepared!

I’m feeling a little terrible as I had a third saddler out to check the fit of Charlie’s saddle and, low and behold, it absolutely doesn’t fit. No wonder he’s been so miserable – the physio has said it’s probably the one of the main causes for his issues. It does make me frustrated, though, knowing that two professionals have failed him.

This has meant we’ve had to try something new. I’m very reluctant to put a normal saddle back on him, so I’ve borrowed an exercise saddle from work and Charlie loves it, he’s like a different horse. He’s building topline like never before and he’s much happier working in the school. I’ve even tested it out over a short course of 1m10–1m20 and he went well. They are also competition legal, which is handy. I can highly recommend them, they’re not as bad to ride in as you think.

So, between working Charlie in the exercise saddle and his Dengie diet, he’s looking superb. I promise we’ll be out competing soon and I haven’t given up on my goal of jumping a Foxhunter by the end of the year. Competition season is now well upon us… April saw us take a trip to Hartpury College for the Petplan Area Festival Championships, where we competed at Novice. Unfortunately, we didn’t get the results I hoped for, but what a great experience – hopefully we’ll be lucky enough to qualify again this year.

Sherbert and I have been busy out competing at local venues and have gained the points required at Novice for the Summer Regionals, with the next round taking place in July at Bicton Arena. We’re also on our way to getting the qualifications needed for the Petplan Area Festivals at Elementary level, with just one more qualifying score to go.

Away from competing we’ve been working on some Medium movements in our training sessions with lots to take home and practice. Hopefully we’ll be out competing at this level soon. I never thought I’d get to Novice level, let alone Medium – the hard work is paying off.

We’ve also been doing lots of hacking in the lovely weather and had a couple of trips to the beach. I’m so lucky to have beaches so close to home that allow horses to use them.  Sherb loves the beach, where he gets a change of scenery and a chance to clear the cobwebs. He isn’t great at galloping, but he improves each time and it really helps with his fitness levels. His Dengie diet is really helping with his stamina and energy levels, too.

I’m lucky to be taking a trip to the dressage at Hickstead in June to help and support my great friend and trainer, who’s competing there. It’s a lovely venue and hopefully I’ll get to compete there myself one year – always good to have a goal.