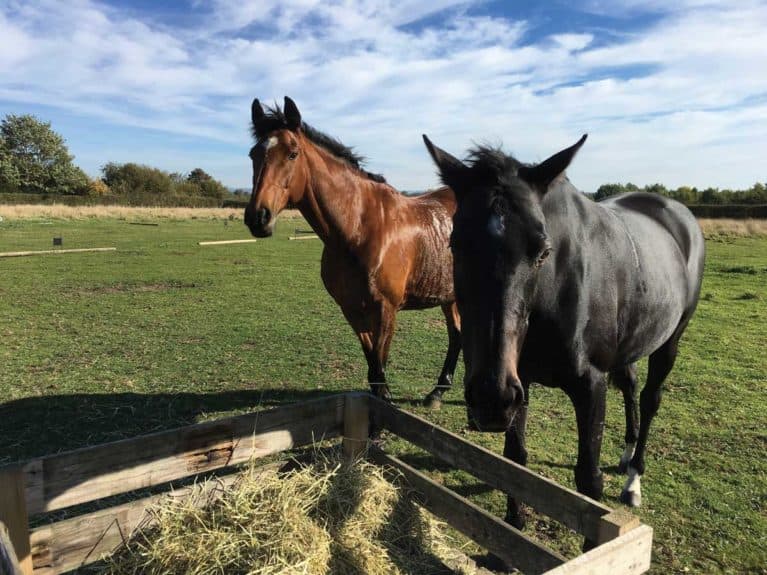 So, it turns out that managing my time with two horses, two jobs and a load of household chores can be seriously hard work – I’ve struggled to get either of the horses ridden this winter, let alone tackling my mountain of washing.

The dark nights are killing my motivation, too, so I’ve decided it’s time to take action!

Instead of making plans to finish work early or bust my balls to get out to arena hire in the week, I’ve actually made the decision to not worry about it! I’m not going to the Olympics, my horses won’t mind a few more days of munching in the field rather than hacking, and I could certainly benefit from some extra pennies in my bank. I’m taking the pressure off and there’s no shame in that.

Pea has been going so well since she’s been with us and come back into work – she’ll be more than ready to pop around her first BE80 in April.

As for Pat, he needs a few months of confidence-building to get him prepared. I have decided to tackle this in two ways…

1. Get him out hunting I need to get him running on and going forwards into jumps again, feeling as though he loves it.

2. Cross-country schooling I’m going to face my fears and get out more often. I never feel confident going cross-country schooling – it just doesn’t have the same feeling for me and I flap about before the fences more than I would at an event. I need to change something, though, so I’m starting here.

It’s about the journey

I know how hard it is to build a horse’s confidence when you’re apprehensive or scared yourself. There have been a lot of suggestions that I should send Pat to a professional rider to get his confidence up. I appreciate the theory behind this, and perhaps in different circumstances – such as a lottery win – I would. But the thing is, we’re on this journey together.

I bought him as a young horse to make my own – to teach him my way and make him happy to be my horse. Sending him away or getting him ridden by someone else doesn’t feel right for me. I want us to grow together and although this might not be the fastest way to progress, for me it’s the most rewarding. I’m learning all the time and so is he. If he learnt quicker than me, I’d be left behind and vice versa!

There’s no shame in taking things slowly or choosing the indirect route to your goals. Sometimes the longer way can be more educational and much more fun.

I try to avoid getting frustrated about Pat’s spooking and deal with it by rewarding the good parts and ignoring the not-so-good. I’ve spent seven years trying different tactics with him, and this one seems to work the best for us. He likes to know I’m holding his hand and the clearer I make my instructions, the more likely he is to do what I want.

Who knew a gelding would be more complicated than a mare? Pea is positively plain-sailing compared to Pat!

So, my plan from here is to be clear, calm and focused. Don’t rush and don’t feel I should be jumping bigger or climbing the levels too soon – I’ve made these mistakes before. I’m just going to do what we’re confident and happy with, and make sure that everything we do is fun.

The end’s in sight

I hope you’re all looking forward to more daylight hours and the chance to squeeze in a quick spin before or after work again – I know I am. I can’t wait to give you the lowdown on my first New Year outings next month!