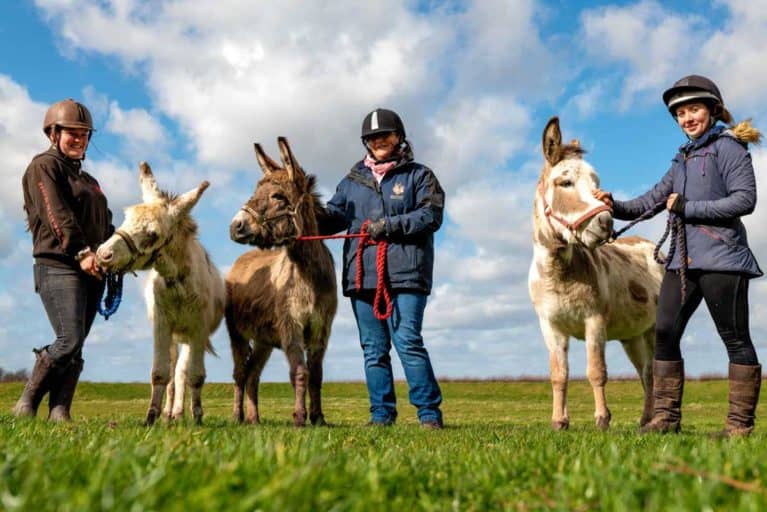 Following their rescue from a muddy Lancashire field on New Year’s Eve 2019, three malnourished donkeys are thriving six months on

Two foals and a jack – named David, Connie and Theo – were rescued by The Donkey Sanctuary from their field in Lancashire, found shivering, malnourished and infested with lice. All three donkeys also needed urgent attention from a farrier as they suffered with overgrown hooves. The rescue on New Year’s Eve was part of a response alongside Bransby, the police and the RSPCA.

Adele Crompton, Donkey Welfare Adviser from The Donkey Sanctuary, was part of the rescue team. She said: “It was heart wrenching to see the donkeys so clearly undernourished and suffering outside in the harsh winter weather. Despite the horrendous life they’d endured, the trio responded fantastically to their new grooms. Being naturally inquisitive and trusting, the foals in particular were quick to learn and respond to compassionate handling. It’s so rewarding to know they’re now safe and thriving thanks to the hard work of all our welfare staff and grooms.”

No owner of the donkeys could be identified, so the trio were relinquished by the RSPCA and placed in the care of The Donkey Sanctuary. They’ll be given a loving home for life through the rehoming scheme. Now that the government has approved the resumption of rehoming activities, The Donkey Sanctuary is now able to begin rehoming donkeys again.