My Account
Home News Missing Badminton and Kentucky? Virtual Eventing is Here for You

Missing Badminton and Kentucky? Virtual Eventing is Here for You 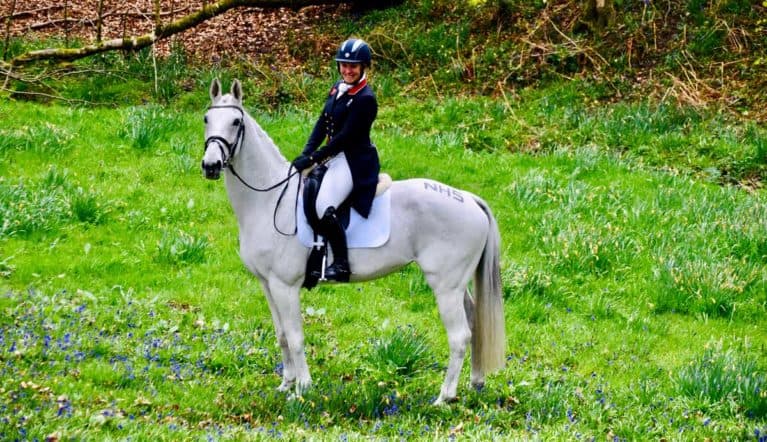 As April creeps to a close, top level eventing should be at its peak – Kentucky’s 5* segues into Badminton, which opens up the floodgates to what many within the heart of the sport fondly refer to as Manic May, in which the major competitions come up in quick succession and usher in the summer season.

But not this year. COVID-19 has put paid to all that, and instead, eventers at every level – as well as fans of the sport – are stuck at home, wondering how exactly to fill their weekends without the thrill of solid fences and a race to the finish.

Uptown Eventing’s Rachel Wakefield-Wynne wants to change all of that with Virtual Eventing, a reimagined, lighthearted online competition that will bring the stars of the sport directly to your sofa.

Rachel’s aim in setting up the event is “to bring a little bit of happiness” to the equestrian community – and her enormous efforts, along with those of her assembled team of cohorts, has done just that so far with two weeks left to go before the show begins.

The idea was born when Rachel saw a video of an NHS nurse lamenting the troubling situation we’ve found ourselves in. She wanted to help – but how? She couldn’t afford to donate a life-changing sum, nor is she a frontline worker fighting the virus herself. Instead, she decided, she could use the considerable skills and contacts she’d amassed over a lifetime in the eventing industry, creating something that would provide a jolly distraction for riders and fans while also raising vital funds.

And so the NAF International Virtual Eventing 5* came to fruition. Once she’d put her idea out into the world, Rachel discovered just how much demand there was for something to fill the gap left by the myriad cancellations in the spring calendar. She assembled a team – “I’ve had to learn to delegate,” she laughs – putting the PR in the hands of 4* rider Pumbaa Goess-Saurau and Lara Surman of Zvari Marketing, the virtual trade village under the watchful eye of Tom Jones, and enlisting Mark Jennings of Chilli Pepper TV to begin to build the foundation for a five-day, live-streamed eventing extravaganza. Top commentator Spencer Sturmey was quick to sign on as the voice of the show, and an enormously experienced ground jury made up of Annabel Scrimgeour, Jane Tolley and Les Smith, and suddenly, an embryonic idea was looking very real indeed.

So what is Virtual Eventing, exactly? It’s not quite eventing as you know it – after all, Rachel and her team are keen to abide by government advice to minimise risk – and, of course, they’ve had to work around the fact that their competitors are confined to barracks. Instead, it’s something a little bit more creative, and slightly sillier, though no less star-studded and exciting.

The competition will begin on Wednesday, May 6, with the first horse inspection. Each pair will trot up for the ground jury – but shelve your ideas of tasselled boots and tailored coats, because they’ve been given a dress code. Will they opt for something outrageous? Perhaps fancy dress is the order of the day. Or, they can celebrate the doctors and nurses on the front line with their outfits – it’s all under wraps for now, but expect the unexpected.

On Thursday and Friday, each combination will perform a dressage test, which will be judged in real time as it’s streamed. Saturday’s cross-country day will, Rachel assures us, “be like nothing you’ve seen before” – while Sunday’s showjumping course has been created by a 5* designer but with smaller fences, giving audiences a great course plan to steal when they’re back in action themselves.

And the competitors? Well, they’re nothing to sniff at. Over 50 riders from a dozen countries are taking part, including fan favourites such as Laura Collett, who rides her Boekelo winner London 52, Gemma Tattersall and her Rio mount Quicklook V, Boyd Martin and his US National Champion Tstetserleg, Sam Griffiths and Badminton winner Paulank Brockagh and William Fox-Pitt and the now 20-year-old Kentucky winner Cool Mountain.

Hooked already? Us too. The NAF International Virtual Eventing 5* will run from May 6–10, with a free livestream throughout on virtualeventing.com. Head to the website for more information, to nab some fab merch, or to donate to your favourite rider’s charity collection pot. All the money earned will go to their country’s primary healthcare charity. Watching eventing and doing good deeds all at once? Sounds like sofa time well-spent to us.