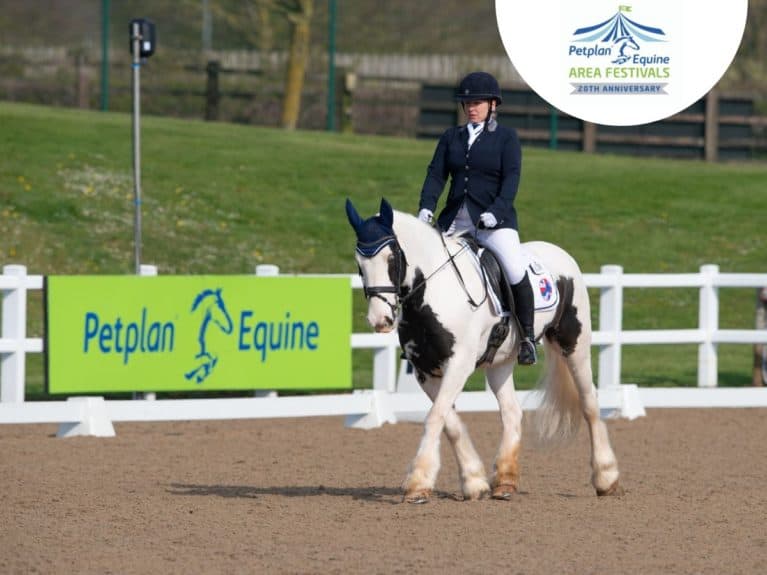 The 2019/20 season of the Petplan Equine Area Festivals kicked off in May. Read on to find out how Petplan is marking its very special 20thyear of Area Festival sponsorship

The current season is a very special one for Petplan Equine as it marks the 20th year of sponsorship of this iconic British Dressage series and it’ll be celebrated at all the Area Festivals around the country this summer.

As part of the celebrations for the 20th anniversary, Petplan Equine is launching the Petplan Equine Area Festival Awards. These awards recognise the hard work and endeavour that grassroots competitors and their support teams put in to take part in the much-loved Area Festivals.

The award categories are:

Entries are open and close on 1 September. Nominations will then be judged by an independent panel of equestrian experts.

To nominate yourself, a friend or a member of your family, click here. Ts&Cs apply*

The Petplan Equine Area Festivals are aimed at amateur riders and encourage all types of horse and rider partnerships to take part. To qualify, you need…

The top 10 in each class at the Area Festivals qualify for one of eight Area Festival Finals. The top scorers at the Finals then go forward to the Petplan Equine Championships at Hartpury College, Gloucestershire.

Heather Hopkinson and Brackenspa Houdini (Harry) competed in the Novice Bronze class last year at Aintree Equestrian Centre, where all their hard work paid off and they won their class, qualifying for an Area Festival Final at Manor Grange. Heather and Harry then won and qualified for the Area Festival Championships at Hartpury College in April 2019. However, it’s not all been plain sailing, as Heather explains: “18 years ago I suffered a brain haemorrhage. Although I was extremely lucky and survived, it took me 10 years to recover enough strength and motor skills to get back in the saddle. A kind friend, who’s also a neuro-physio, offered me the ride on her stunning horse, which led to the opportunity to ride on our county show circuit.

“We were having lots of fun, when sadly a field accident ended his show career and prompted me to start my dressage journey.”

This was when Heather met Harry, whose full name is Brackenspa Houdini – named in recognition of the fact that his dam had escaped from the field the night he was born. “He started out eventing and was always well placed after the dressage,” Heather continued, “but he struggled with the showjumping. His owners, who are friends of mine, decided it just wasn’t the career for him and maybe he’d be happier doing pure dressage.

“Having just lost my lovely mum, with whom I’d shared my love of horses, I decided to go and see Harry. His owners knew about me and my ongoing horsey traumas, and even though Harry looked like more like a racehorse than a dressage horse when I tried him, he was beautifully schooled and I loved every moment of our ride so he came home with us.”

Heather’s barely stopped smiling ever since their paths crossed, but getting to ride at the Petplan Equine Area Festival Championships was a super-special occasion. She explains: “I think I was easily recognisable by my big smile during the championships. Competing at Hartpury is one of the highlights of my dressage career and it was the best reward for all our hard work over the season – made even better by finishing third and receiving a ‘well done’ from Charlotte Dujardin just before the prize giving.

“Everyone was so lovely and helpful and it was the perfect opportunity to catch up with some friends and have a wonderful memorable day sharing our love for horses, dressage and picnics,” concludes Heather.

Do you have a special partnership with your horse? Petplan Equine would like to hear it – use #HorseStories to share your story.

* Ts&Cs can be found here