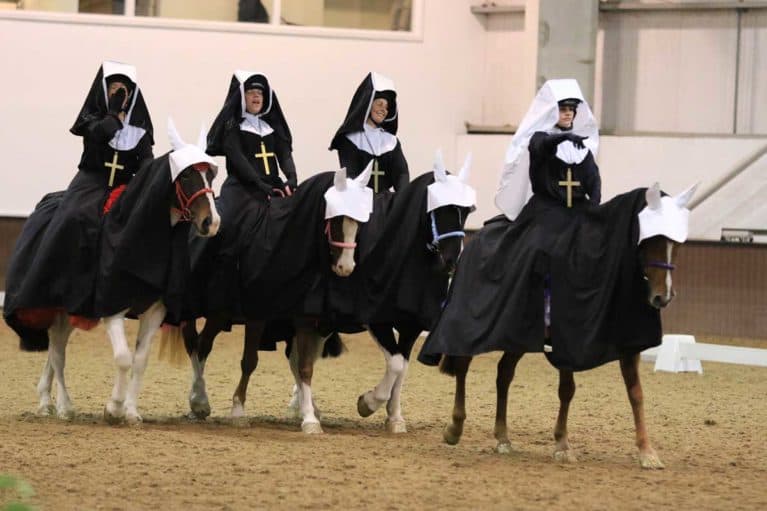 With team selection out of the way, the four finalists look ahead to the big day – and reveal the secrets of their success

With just four spots in the British Riding Clubs Saddles Direct Quadrille final up for grabs – and 14 teams in contention – you could cut the tension with a knife at the selection day at Bury Farm, Buckinghamshire. The teams were clad in vibrant costumes and performed their painstakingly perfected floorplans to musical accompaniment with smiles on their faces. Every last detail of the almost pantomime-like displays were judged, from the quality of the handmade costumes to the skill with which the home-grown floorplans told a story – and the final four were truly spectacular.

Newlands Corner RC: Sleeping Beauty shall go to the party

With an impressive score of 79.86%, quadrille newcomers Newlands Corner pulled it out of the bag with their fairytale test, which celebrated their club’s 60th anniversary. The team performed their floorplan, choreographed in conjunction with their instructor, Amanda Birch, to a medley of 80s classics and brought their characters – a princess, dragon witch, a handsome prince and a fairy – to life with narration and symbolism.

“It was amazing how our horses found the beat of the music,” said team member Lorraine Holloway, “we found that they really enjoyed it, and we as riders have become even closer as a result. We all had a part to play – I’ve had to sew more than I’ve ever sewn in my life – and we’re thrilled that, after trying something new, we’ve made a good job of it, and we can’t wait to give it our all in the final!” The team from Essex were sky high with their impressive score of 85.56% and were instantly recognisable as WW2 Spitfires and their pilots. The idea sprang from discussion of aerial displays, and the iconic and evocative military band style music of the WW2 era was perfect to ride to. The team felt it was a privilege to be riding in memory of such heroic figures and had been in training for five months do them proud.

The club had their own selection process, and team manager Anne Corfield and trainer Kim Ratcliffe whittled down nine hopefuls to four. The team shared tears of joy and frustration throughout training – all the riders were quadrille newcomers and described the experience as a steep learning curve. However, the final result was a fabulous, fitting and near hoof-perfect tribute to the WW2 heroes. Anne said: “We can’t wait for the final and, with it being Remembrance weekend, we sincerely hope to ride a performance fit to honour the brave Spitfire pilots again.” The Cornish quartet wowed the crowds and the judges with their quick-change routine – so much so that they came away with a super score of 84.44%. The innovative idea came about after three members of the team had been chatting about a colourful Moulin Rouge theme, when the fourth joined after having made a delivery to a convent. The thought of combining the worlds of Sister Act and the Moulin Rouge was initially put forward in jest, but the more the team thought about it, the more they liked it.

“Costumes were definitely a challenge,” said team member Jamie Ball, “I dread to think how many hours of thought went into it. The habits had to be secure, but super easy to remove without undoing any of the glittery costume underneath.”

Much of the team had plenty of quadrille experience, and the challenge was working out something impressive that everyone could achieve and that would fit the music. After that, it was all about practice – both on horseback and on foot! Finishing on the highest score of the day, Saffron Walden & District truly found the pot of gold with 86.81%. Their mounts were a mixture of ex-games veterans and cheeky Pony Club types, who all had to be taught to leg-yield especially. Two of the team members had over 20 years experience, and their floorplan barely changed from the first draft.

Team member Suzannah Englemann said: “The ponies all work really well together but the routine’s pretty busy, so it was quite a challenge to keep up, keep in line and keep the ponies looking presentable.”

The team had a prop element to their test, and came in carrying a pot of gold. Far from being a spook-fest, the ponies were very quick to accept the huge golden bucket as if it wasn’t there at all. Suzannah continued: “The two games ponies have done countless county fairs and weren’t upset at all. The other two were suspicious at first, but soon came round.” Stay tuned for more stories from the BRC Quadrille final and H&R gets the inside scoop from the winning team.