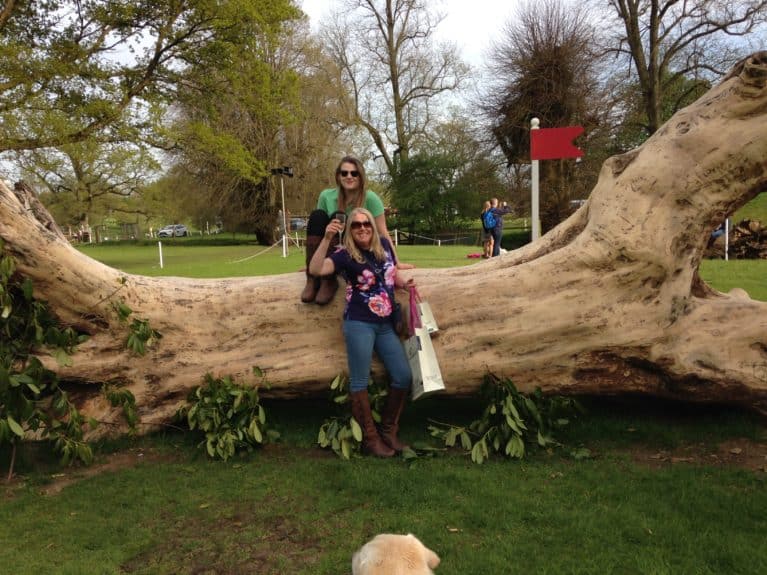 We all wish we could be in situ at Badminton right now, but whether you watch the live-stream each year or plan your annual leave around a trip to Gloucestershire, we’ve all got a plethora of brilliant memories to keep us busy reminiscing until the 2021 renewal comes around. Team H&R have picked out some of their favourites – and we want to hear yours, too. Share your best Badminton memory in the comments!

My best memory is going on cross-country day in 2016 with my family to celebrate getting a job at Horse&Rider and PONY magazines. We drank lots of champagne whilst we walked the course, and our Labrador, Poppy, had the best time jumping in the lake at the end of the day!

Walking the course for the first time with a group of readers many years ago – I had no idea quite how long it was until then!

I’m a massive Pippa Funnell fan, having grown up playing her computer games and watching her DVDs. Sitting on the grass on XC day being so close to her and all the other top riders in action is a highlight of my year, and it’s even better when the sun is shining! During the showjumping phase you can find me watching on the edge of my seat.

I’m somewhat embarrassed to admit I’d never been to Badminton until 2017 (I’d watched it on the Red Button religiously for many years before this, but obviously this doesn’t do justice to the event itself!). I was there for the duration and while the highs and lows of the CCI5* were absolutely incredible, the memory that remains strongest for me was watching the prize-giving for the Mitsubishi Motors Cup (now Science Supplements Cup) – specifically the winners of the BE90.

Surrounded by a line-up of horses at least 2hh taller than him, 14hh New Forest pony stallion Willoway Free Spirit and his owner Laura Avery took the title. He definitely didn’t look like your typical winner, but it just went to show that with a bit of luck and plenty of time, practice and hard work behind the scenes, any horse could get to ride around the Badminton course. It’s inspired me as something to aim for ever since – not that Tango’s ever got wind of this ambition! He’s enjoying his life as a semi-retired happy hacker, but maybe something for the future…

Outside of my role with Horse&Rider, my career as a freelance equestrian journalist focuses largely on international eventing – but no matter how many events I cover each year around the world, Badminton always remains the most special (and most manic, too – my week starts on Tuesday morning and I dash around the place like a whirling dervish until approximately 10pm on Sunday night, when the media centre starts to be dismantled around me).

Picking a favourite memory from this incredible event is a bit like choosing a favourite child – my Badminton experience is a patchwork quilt of tiny details and overarching storylines, woven together with the thread of our incredible eventing community. There’s the thrill and the terror of watching a friend leave the start box, the indescribable joy of cheering them back through the finish and the heart-stopping numbness of watching their day end early. There’s late-night laughs in the media centre; early morning chats with the grooms as their horses pick at the dewy grass in front of the house; tears and hugs in the moments after a winner is crowned; blurry memories made at the cocktail party that’ll have to wait until I write my memoirs a few decades from now.

But for me, some of the best moments have been the quiet ones – the time spent in those famous golden stables, watching horses unload and settle in and piecing together shoots and interviews with competitors and their connections. In 2018 I popped in to do a piece with Michael Jung, who had brought La Biosthetique Sam FBW for his final crack at the competition he’d won two years prior. I was shown into his stable – he was allocated one of the ultra-private ones in a small wing off the main courtyard – and found him lying down, curled like a comma in the straw around his feed bucket.

“He always has to have a lunchtime nap,” laughed Lena, his travelling groom – but I didn’t mind a bit. I could have quite happily stayed there all day, hanging out with the King as he snoozed in the straw. A few minutes later, I sat down in the riders’ canteen with Michael for a coffee and a chat.

“Does it ever start to feel any less special to be here?” I asked him.

He thought for a second and smiled knowingly.

“No. It’s almost like a second home now, but it’s always magic.”