The World Class Programme and the build up to the Olympics 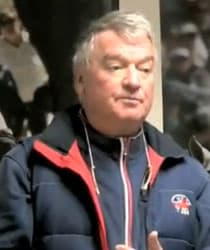 The aim is to have in place a sustainable system that can deliver more medals on the international stage now and in the future. Two leading figures are;

Will Connell has been involved with equestrian sport, primarily through eventing, all his life. He served in the Royal Artillery from 1985-2002 and was Commanding Officer of The King’s Troop RHA.

He was Chef d’Equipe of the British Young Rider Eventing team from 1997-2001 and is a British Eventing steward. In October 2003 he was appointed British Equestrian Federation Performance Director, with responsibility for the co-ordination and delivery of the UK Sport funded World Class Plan covering Eventing, Dressage, Show Jumping and Para-Equestrian Dressage.

Will was Team Leader for the Athens Olympics 2004 and Beijing 2008.

Yogi Breisner was appointed World Class Performance Manager and Chef d’Equipe to the British Eventing team in 2000. He had just eight months to get to know the squad before the Sydney Olympics, at which they won team silver, Britain’s first eventing Olympic medal for 12 years.

Yogi has since led medal winning teams at both the 2004 Athens and 2008 Beijing Olympic Games in addition to enjoying many successes at both European and World Championships.Yogi is Swedish-born and first trained under his fellow Swede, Lars Sederholm, at Waterstock where he was based for 13 years from 1978-91. A member of the Swedish Eventing team from 1976-87, Yogi won European team gold in 1983 and competed at the 1984 Los Angeles Olympics on Ultimus. He finished in the top 10 at Badminton four times.

Aside from his duties as British Eventing’s National Coach, Yogi is much in demand in National Hunt racing, training both jockeys and horses to jump.