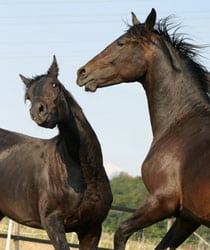 A well-respected American horse trainer has come under attack after advising an owner to administer electric shocks to her horse.

Julie Goodnight, famous in the US for her TV show ‘Horse Master’, was asked how best to deal with the mare, who had been behaving aggressively towards her gelding fieldmate despite showing no aggression towards humans.

Advised Goodnight: “While the behaviour you describe could be chalked up to normal herd behaviour, some horses can be classified as bullies. These horses are unnecessarily aggressive towards others. In other words, even after dominance has been fully established, they continue to attack other horses around them – seemingly for no good reason other than just to pick on them. If the gelding is not doing anything to deserve these attacks, then I’d say your mare is a bully.

“There is one sure-fired method of curing aggressive horses and I have used it a few times for this purpose. It is a shock collar. It straps around the horse’s neck and is operated off a remote control, issuing a mild and brief shock when you push the button on the remote. Shocking her for her two or three times for her unwarranted and dangerous behaviour would probably be all it would take to permanently resolve her of the aggressiveness.”

Julie Goodnight’s comments have sparked huge debate across the horse world and the subject is currently a hot topic on the Horse&Rider forum, where members are expressing strong views the use of the collar.

Says Horse&Rider forum expert and Recommended Associate of the Intelligent Horsemanship Association, Liz Pitman: “What appears to be aggression can actually be defensiveness due to pain, a lack of confidence or other reasons. Adding further pain into that mix is not going to help in a positive manner.”

The collar in question is the Vicebreaker, a product developed for use with extreme behaviour in horses. Colorado-based Goodnight explained how she had used it in the past for “aggressive horses, and for a tantrum throwing horse who threw a wall-eyed destructive tantrum any time you’d take his buddy away. In most cases, one or two training sessions resolved the bad behaviour; for the tantrum thrower, it took a few more.” She denied the approach as being cruel, instead describing it as “the most humane approach”.

The Vicebreaker fastens around the horse’s neck just behind the throatlatch; operating a remote-controlled button then stimulates an electrical charge onto the neck. Although in trials the collar was concluded to be ‘extremely effective’ in deterring aggressive behaviour in horses, questions remain over the ethics of using such a device.

What are your thoughts on this issue? Share your views in the Horse&Rider forum.

Got a question? Find the answers from like-minded horsey people and H&R forum experts – 24 hours a day!