How a wound heals

Horses tend to be accident-prone, which means that dealing with wounds is part and parcel of being a horse owner. Vet Sally Hodgson, from Hook Norton Veterinary Group, explains how wounds repair and how you can help the process 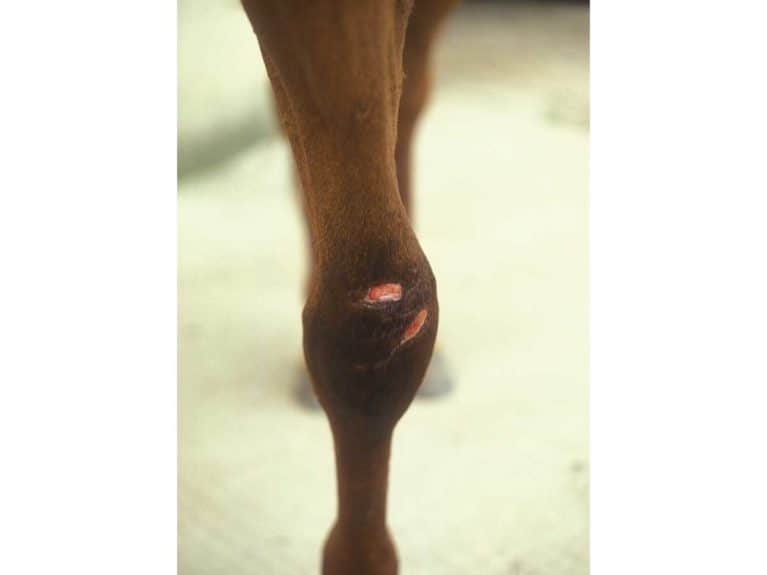 Horses have an incredible ability to injure themselves on virtually anything and, quite often, the cause of a wound remains a mystery. But whatever the type, severity or cause, understanding more about how wounds heal will help you ensure your horse’s injury has the best chance of repairing as quickly and neatly as possible.

There are various different types of wound your horse can sustain. The most common include lacerations, puncture wounds and incised wounds. Other types include grazes, bruises, haematomas, contusions, complicated wounds and burns…

For a wound to heal, three processes have to take place and they overlap in time and space – this means that different areas of a wound may be undergoing different healing processes at the same point in time.

1. The inflammatory and debridement phase

Any dead or dying tissue has to be removed and bacterial contamination or infection brought under control. Inflammation is the body’s initial response to a wound and it brings immune system cells to the area to start cleaning up. This produces a thick discharge. Debridement means the removal of dead or damaged tissues. This phase may last up to five days.

Any tissue lost due to the wound is replaced in the repair phase.  This usually begins within 12 hours of trauma but can’t be completed until the debridement phase has ended. The time taken to repair the damage depends on several factors, including how much tissue has to be replaced, how good the blood supply to the area is, and how long the inflammatory and debridement phase lasts.

Lost tissue is replaced by a layer of granulation tissue that brings new blood vessels and specialised cells called fibroblasts, which make tiny strands of a type of collagen. The granulation tissue is quite weak until 5–15 days post injury, when it becomes much stronger.

A new top layer of skin must grow across the granulation tissue – this is called epithelialisation. New skin cells must move inwards from the blood vessels at the edges of the wound. Epithelialisation is a very slow process – at best the new cells can migrate 1.5mm in 10 days.

As the new area of skin forms, the blood supply behind the healing edge decreases and the cells shrink and become more densely packed together, forming a scar. This process is called contraction. Contraction contributes to the reduction in size of a healing wound by reducing the area needing to be covered by epithelialisation. Wounds can’t heal without producing some scarring, however massaging the scar tissue using aqueous cream may help to reduce the final size of the scar. Wound contraction continues for months after the wound has closed over.

The time taken for a wound to heal depends on how much tissue is lost, with larger wounds usually taking longer to heal. However, there are several other factors that affect the healing rate… Sutures are used where there’s tension across the edges of a wound – if a wound gapes open, there’s tension across it – and different types of suture can be used depending on how the tension is affecting the wound. If there isn’t any tension, staples can be used to hold the wound together. In general, wounds on the head are often suitable for stapling, but wounds on legs, especially over joints, usually need suturing.

A wound can be stapled or sutured if it occurred less than six hours previously. After this time, the bacteria contaminating the wound overcome the immune system and begin to impair healing, so older wounds should be left open to allow drainage.

Is it an emergency?

It’s advisable to call your vet out straightaway if your horse has a wound that’s near a joint, tendon, eye, nose or mouth, especially if it’s not superficial. Wounds in these sites can have very serious consequences if they’re not properly treated from the beginning, and wounds involving a joint or tendon can result in fatal infections if not treated early enough.

If you’re in any doubt, call your vet for advice – these days, photos are easily sent to your vet from a mobile phone. Make sure that any photos you send are in focus and clearly show where the wound is.

The first step in treating any wound is to clean it to remove dirt and debris. This is best done with large volumes of clean, running water such as drinking water from the mains supply – rubbing can drive particles of dirt on a wound surface deeper into the tissues and antiseptic can be damaging.

Once the wound is clean, a water-based wound gel should be applied under a dressing to provide the right moisture levels for healing to begin. The most important recent development in wound management is the realisation that wounds heal far better if they’re kept moist using wound gels and technical dressings. This is because moisture carries oxygen to the wound surface, and prevents cells from drying out and dying.

Once a wound gel has been put on, a dressing and bandage can be applied to protect it. This will also apply pressure to the wound and help to stop any bleeding. Creams, sprays and powders are best avoided, as they can do more harm than good. These products are usually very hard to remove once they’ve been applied, preventing your vet from being able to suture or staple the wound…

Occasionally, a wound won’t heal properly despite every effort to help it repair. Signs that a wound isn’t healing as it should include persistent or excessive discharge, proud flesh and pain in the area. Proud flesh is a term used to describe the excessive growth of granulation tissue, which fills in the wound during the repair phase. It’s considered to be proud flesh when it protrudes from the wound and starts to push out beyond the skin edges.

These signs tell your vet that there’s infection or a foreign body in the wound, or that an underlying structure such as a joint or tendon has been affected. The wound will need further investigation by your vet to find the cause of the problem, so it can be treated and allow the wound to heal.